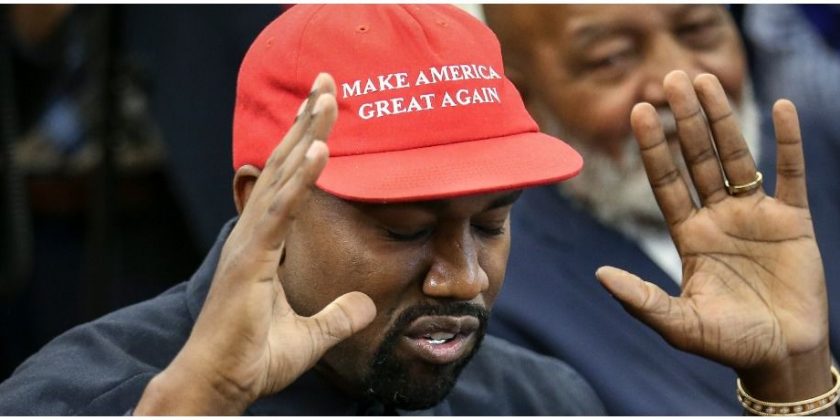 Kim Kardashian is allegedly worried for her husband Kanye West, the father of her three children, is becoming “unhinged” after his latest Twitter rant, per a report by Us Weekly.

On October 30, West tweeted that he was being “used.”

“My eyes are now wide open and now realize I’ve been used to spread messages I don’t believe in. I am distancing myself from politics and completely focusing on being creative!!!” shared the rapper on Twitter.

“I support those who risk their lives to serve and protect us and I support holding people who misuse their power accountable. I believe in love and compassion for people seeking asylum and parents who are fighting to protect their children from violence and war,” he continued.

He also thanked his family, including Kardashian, “for supporting my ACTUAL beliefs and my vision for a better world.”

Kardashian allegedly became worried about West after he tweeted he wanted to abolish the amendment that outlawed slavery and after his strange sit-down with Donald Trump.

@hypebeastmusic: Following the unveiling of Candace Owens’ “Blexit” campaign, Kanye West has released a series of statements via his Twitter account announcing he did not design the Blexit merchandise and will be “distancing [himself] from politics and completely focusing on being creative.” West went on to share the ideals he supports, and says he has “been used to spread messages [he doesn’t] believe in.” Swipe to read West’s tweets, and let us know your thoughts below. Photo: @gettyimages

Prior to his meeting with Trump, West donned a “Make America Great Again” hat during his September 29 appearance on Saturday Night Live. He then ranted about his feelings on the current political climate after the show went off the air, but not before his comments went viral on social media.

Kardashian recently said in an interview with Alec Baldwin that “I let [Kanye] be who he wants to be. … I let him have his own views and opinions, even if they’re different from mine,” adding, “[We] definitely have conversations if I don’t understand something in private and talk about that.”

Also reportedly worried about West is Kris Jenner, his mother-in-law and matriarch of the Kardashian clan and empire.

People Magazine reported that during an appearance on The Ellen DeGeneres Show, Jenner was sympathetic towards her son-in-law.

“My job as a mom is just to be there for my kids and be supportive and love them,” she said. “Kanye’s an amazing son-in-law. He’s an amazing dad and husband and friend and brother-in-law. So we know my son-in-law, Kanye,” she remarked.

“When you have six kids and extended family and nine grandchildren, there’s a lot going on. And I just want to be there and be supportive and be there if he needs me,” she elaborated.

The rapper and businessman admitted he was diagnosed with bipolar disorder and remarked just this past month that he has been “off his meds.”