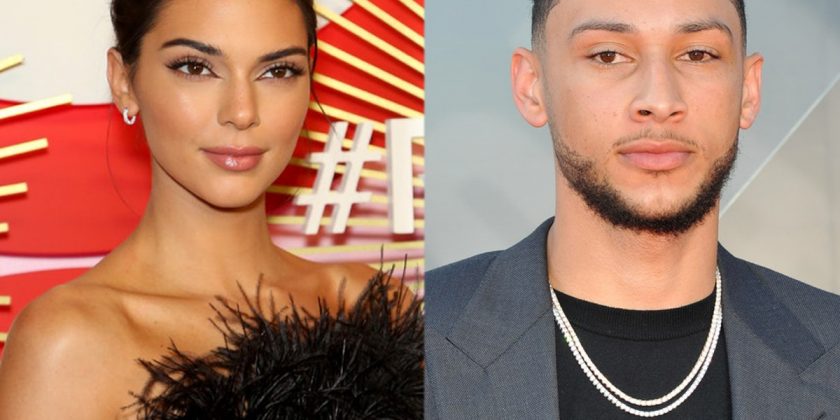 What’s the deal, are Kendall Jenner and Ben Simmons a thing or not? Rumors persist that they may be getting back together, and Kendall Jenner and Ben Simmons’ astrological compatibility is pretty much off the charts, so I wouldn’t be surprised if they decided to give it another try. While they haven’t confirmed anything yet, by all appearances there does seem to be something happen between the two again. A source told People that “When she’s not working, she’s been focusing her free time on Ben and flying to Philadelphia,” but says that despite hopping flights to see him, that same source says “They’re still not exclusive though.” Well, that may be true, but they aren’t exactly acting like people who are keeping it casual. For instance, last week Jenner was spotted in the stands watching the 76ers player’s game. On its own it’s not really a big deal; what makes this stand out is who she was sitting with — his mom. I don’t know about you, but I don’t usually introduce my flings to mom. Just sayin’.

So, while they might not be talking, that doesn’t mean we can’t get a little insight into their possible relationship by taking a look at their astrological compatibility. Jenner was born November 3, making her a Scorpio and Simmons was born July 20 under the sign of Cancer, and this is a pairing of signs that always guarantees fireworks. Here’s what else we can intuit about what a relationship between these two would be like, based on their zodiac signs.

Because both signs are emotionally intense when they come together, you can expect things to get fiery. There is a strong sexual attraction, and while Cancer tends to hide behind their shell, Scorpio knows how to draw them out and make them feel like they are the center of their world. This is because while Scorpio is more bold than Cancer, both of their approaches are rooted in emotion, a desire for a deep connection, and even security. Cancer is drawn to Scorpio’s passion and ambition while Scorpio craves the security and nurturing nature of Cancer. So, you can imagine why when these to signs meet, it can be really hard to let one another go.

Cancer and Scorpio are able to trust one another completely.

While Scorpio may have a (deserved) reputation for manipulation, Cancer somehow manages to bring out the best in them by giving Scorpio what it really needs, which is to be able to fully trust someone completely. Cancer exudes trustworthiness, because they are so passionate about settling down and finding someone they can open up to and feel safe and secure with. Because Scorpio can sense that Cancer really is in it for the long haul, it finally allows them to put down their stinging defense.

These signs make a great team.

If Scorpio and Cancer are looking for a solid partnership, they couldn’t find a better pairing, compatibility-wise. That’s because while they have very different drives, they compliment each other perfectly. Scorpio — ruled by Pluto, the planet associated with passion, transformation, and ambition — craves power and success. Cancer, on the other hand, is ruled by the moon, the planet of Emotion, and the way that manifests in this sign is a desire for security, home, and nurturing their partner. In other words, Cancer offers Scorpio the support system they need, and Scorpio brings passion and excitement into Cancer’s life. Together, they create a solid team. The one thing here to be careful of though is that sometimes these opposing goals can also create a volatile situation where Cancer feels neglected and Scorpio feels trapped. So long as the two regularly touch bases and remember that their connection is one one based in the heart (and the bedroom), they should be OK.

What does all this mean for Jenner and Simmons’ chances? Well, it all depends on whether or not they can get the face time they need to make this connection work. If they can, this could be the makings of an epic power couple. Both are successful in their own right, and with the right support behind them the sky’s the limit. While they may not be official yet, there is a good chance this is a romance written in the stars.