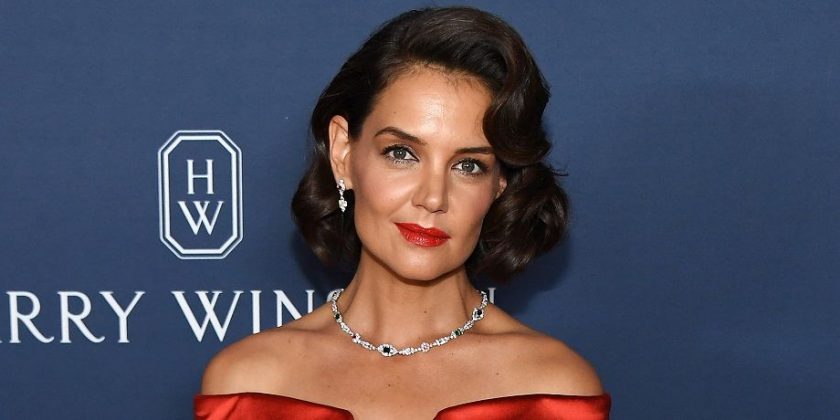 Tongues wagged on Wednesday when 39-year-old Katie Holmes was photographed wearing what appeared to be a large diamond ring. Despite the fact she had it on her left pinkie finger rather than her ring finger, people immediately seemed to wonder if the actress and her beau Jamie Foxx had finally gotten engaged.

People reports that Holmes was spotted out in New Orleans on a break from filming, and seemed to be smiling at her phone as she walked along with her coffee in hand. Despite the baggy grey T-shirt, it was the sparkler on her left hand that received the most attention.

Unfortunately for fans of Holmes and Foxx, it appears that there aren’t quite wedding bells just yet, with a rep for Holmes confirming that despite the jewel, it’s not an engagement ring the actress is wearing.

“Katie’s not engaged to anyone besides her fictional movie fiancé, played by Jerry O’Connell.”

The actress has been linked to Foxx since August 2013, just a year after finalizing her divorce from actor Tom Cruise, when they were spotted dancing together in the Hamptons. Although they have never publicly acknowledged their relationship, they have recently been seen packing on more PDA when out in public together.

Recently they have been spending more and more time together, with Holmes making multiple trips in September to visit Foxx in Georgia where he was filming his own upcoming movie Just Mercy. During those visits, the pair was spotted taking a bike ride together and taking to the gym.

Back in May, a source close to the couple shared with People that Holmes and Foxx are still trying to be careful about being photographed together.

“Everyone knows they are dating, but they still want to keep it private. After the beach pictures, they only spent time together at home and got extra careful. But this year, they have been more social together. They often go to restaurants for dinner dates, or to hang out with friends.”

The beach pictures in question were snapped in September in Malibu. The couple was seen commemorating the “unofficial end of summer” by taking a casual stroll down the beach, walking hand in hand, and playing in the shallow waves together, despite being fully clothed at the time.

Holmes is currently filming The Secret about the power of positive thinking based on the book of the same name.