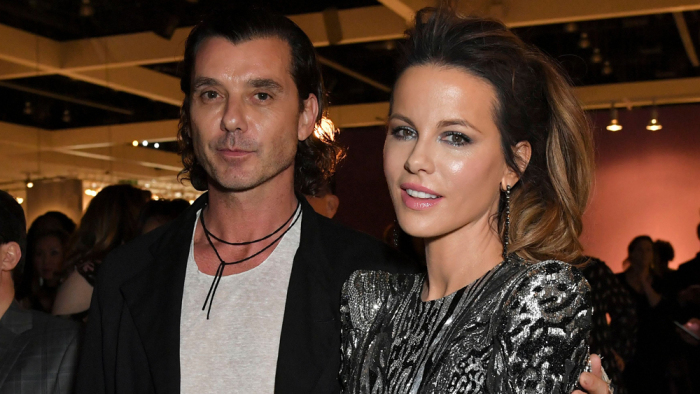 As the 24th annual LA Art Show opened its doors in Los Angeles Wednesday night, Kate Beckinsale, Gavin Rossdale, and more were there to kick things off with a star-studded opening night gala at the Los Angeles Convention Center that benefited St. Jude Children’s Research Hospital.

“Wow! This is so cool,” the show’s art ambassador for the evening, Rossdale, said as he strolled through the room in a black leather jacket, black t-shirt, and black pants, stopping to admire a glass mirrored geometric sphere from Melissa Morgan Fine Art. The Bush frontman was also taken by the black and white paintings by Galerie Bhak, which featured lifelike images of people with piercing eyes.

“The emotion,” Rossdale replied when asked him what struck him about the artwork in the show, specifically Bhak’s works. “All I care about in any art form is the emotion, and the way they have the eyes, the technique and the expression in the eyes,” he continued. “Banksy said, ‘So many artists are prepared to die for their cause, but so few are prepared to learn how to draw.’ So, this is a combination of emotion and technique, and to me that’s the secret to life.”

Rossdale was the main headliner of the event, along with host Beckinsale, who got emotional on stage at the private Patron reception talking about the way St. Jude’s Hospital benefited children and their families.

“There really is no place like St. Jude,” the “Underworld” star began. “St. Jude revolutionized the way the world treats pediatric cancer and other childhood diseases. Because of your support at events like tonight, families never receive a bill for treatment for travel or housing or food, because St. Jude believes that all families need to worry about is helping…. their child live,” she said as she began to tear up.

After Beckinsale thanked the crowd for attending and supporting the organization, she told Variety, “I think you get to a certain point in your life where you know what cancer does to people’s families. It’s just so incredible to me. It’s just a horrible nightmare. And so the fact that St. Jude takes care of absolutely everything, so literally families have no other worries other than taking care of each other and their kids, I find that so moving and so brilliant.”

As the evening continued on, more stars appeared and drifted around the convention center, including Guillermo Diaz, who arrived with friends and admired the art inside of the Mari Dexter exhibit. Inside the Patron reception, Amy Smart and her husband, Carter Oosterhouse, shared a laugh with Odette and Dave Annable, and Joanna Garcia soon joined them to chat.

Meanwhile, Bailee Madison took the stage on a whim and showed off her dance moves with a friend, twirling around in a structured mini dress as a violinist played beside them and guests in the room cheered them on.

Perrey Reeves, Ashley Tisdale, and more soon strolled into the area, and Lance Bass took photos with fans after chatting with friends with husband Michael Turchin. “This is a great date night,“ Bass told Variety. “When you mix art and food and music, it’s the best. It brings out everyone. Everyone loves one of those three things.”

“Kate Beckinsale is one of our best friends, so we wanted to come out and support her and [St. Jude’s] Fisher Pence also, and my husband is an artist,” the N’Sync star said, flashing a smile.

Bass and Beckinsale also discussed their love for art, with Beckinsale gushing about her daughter, Lily Sheen’s, talent. “I used to draw quite a bit, but my daughter paints,” she said. “She does a lot of abstract stuff. She’s into acrylics…she’s really good.”

Meanwhile, Bass and Dr. Drew dished on the most expensive piece of artwork they ever purchased, with Dr. Drew saying it was “$1,500 for a Plein air painting of a poppy field,” and Bass saying he dropped “a few thousand” when he was 19 on an Al Hoag painting of a beach with a little hut he dreamed of living in.