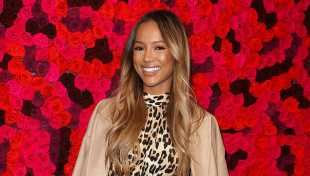 The model-turned-actress could not being doing better since breaking up with Chris Brown after learning he secretly fathered a child back in 2015.

Karrueche Tran, 31, is doing “amazing” four years after splitting from singer, Chris Brown, 30. HollywoodLife spoke EXCLUSIVELY with the model-turned-actress and asked what her next and current goals are in terms of her acting, modeling, and fashion careers. “It is amazing to think where I was four years ago to where I am now and it pushes me to want to do more and become better and the long term goal for me is acting and getting on the big screen,” the beauty revealed.

Karrueche — who starred as Virginia in Claws — continued, “Just like an athlete you go to train and condition yourself and become better. And being on Claws, who I work alongside Niecy Nash, Carrie Preston, Judy Reyes, Jenn Lyon, Dean Norris, Harold Perrineau, all these amazing credible veteran actors I am like, ‘I have to stay on my toes and keep pushing and be as great as them with my career,’ the multi-talented star added.

The beauty, who is of Vietnamese and Jamaican descent, explained, “Acting is the long term for me and in between modeling, hosting, little things I can do in between to continue to grow and blossom! I feel like I am the rose that grew from concrete, its that little bud that starts and keeps growing and growing and you learn that the world is your oyster and you can continue to grow with staying focused and hard work!”

Karrueche has had a full plate since breaking up with the “Loyal” singer in 2015. They had been in an off-and-on relationship since 2011 until Karrueche dumped Chris upon discovering he’d secretly fathered his daughter, Royalty Brown, with Nia Guzman. Since their breakup, Karrueche has been dating Victor Cruz since Dec. 2017 and things seem to be getting serious. The Super Bowl winner took to Instagram on May 17 to gush over his ladylove. In honor of his girlfriend’s birthday he posted a sexy picture of her in a skimpy pink bikini along with the caption: “Every year we celebrate and every birthday that passes reminds me how fortunate I am to have you in my life. Happy birthday my baby, Love you to the moon and back. @karrueche.”