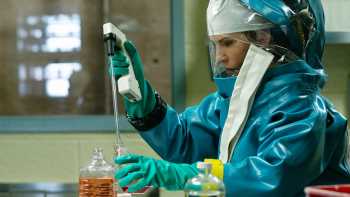 Before “The Hot Zone,” Julianna Margulies admits she would often see stories about diseases such as Ebola in Africa and only “skim over them.” After getting to meet those on the front lines of trying to contain and cure infectious diseases, such as Dr. Nancy Jaax, whom Margulies plays in the National Geographic limited series, though, she has a renewed outlook.

“This is not an African problem; this is a global problem and it is not a matter of ‘if,’ it is a matter of ‘when,’” Margulies tells Variety. “I get so frustrated with science deniers, climate change deniers. What did you study in school that would make you the expert to say there is no climate change? Wake up. These are people who are here to help us, why aren’t we letting them guide us? So I love that that’s what this show is.”

“The Hot Zone” is based on Richard Preston’s book of the same name, which was based on real events in the 1970s and ’80s that led to Ebola being found in Reston, Va. At that time, Jaax was a colonel in the Army and appointed to work on the Ebola outbreak operation for the United States Army Medical Research Institute of Infectious Diseases (USAMRIID).

“She was the only woman in her field,” Margulies says. “She had to constantly fight for her right to be in the room and this is what she’s trained for. It’s always a little disappointing as a woman to see that. I don’t think it would be the other way around.”

Still, Jaax was also married to another colonel in the Army, and Margulies admits that “even though I’m 99% sure she can handle her own no matter what, I think people stayed away from the kind of harassment she might have gotten had she not been married to a colonel.”

For Margulies, who shares that she was not particularly strong in the sciences when she was in school, it was these other, more personal elements about Jaax that drew her into the character and helped her understand from where she came. And she found she had more in common with the woman than one might have thought at first glance. The two both had extensive experience riding horses, for example, which Margulies used to inform how she would physically embody Jaax.

“It’s the little things that help you get an in to the character,” she says.

Additionally, Margulies found herself relating to her through the lens of motherhood. “The idea of leaving my child motherless if I were to have a tear in my suit when I’m in the Level 4 labs and I do get infected and I’m in the slammer, as they call it, for three weeks and don’t see my family, those kinds of things you get to see for a minute with her — just these flashes of the terror in her when she does find a rip in her suit.”

While Margulies was able to tap into some of those real emotions to color the character, she had to walk a fine line when it came to how much to express on her face, even during highly-charged scenes in which she does find a tear in her suit, when she agrees to transport dead and diseased monkeys in the trunk of her car, or even when she’s fighting to continue on in her work, despite others’ concerns about her continuing.

“When you’re finding things like Ebola Zaire in the tissue and then you find a rip in your suit, you want to let some of that anxiety out, but Nancy’s not a hysterical person,” Margulies says. “The conditions and the dialogue, on top of what we’re wearing, get you into the intensity without even trying — but you have to reel it in at times.”

The biggest challenge Margulies found while working on “The Hot Zone” was in her wardrobe. For pivotal scenes in which Jaax is working with the virus, she is in a haztmat suit, and the one production gave Margulies was authentic — down to the ventilation system that whirs when the suit is zipped and everything is working properly.

“I discovered that I’m horrifically claustrophobic,” she shares. “And with the noise, you can’t even hear yourself, let alone your [scene] mate, and acting is reacting, so if I can’t hear him I find that to be also strangely lonely. You’re stuck in the suit and you don’t feel like you’re part of the room. I felt detached in a really strange way.”

The specifics of the science also proved somewhat problematic for Margulies, but she received training from “one of the best infectious disease specialists,” Jaax’ real-life nephew Michael Smit. Margulies worked with him on everything from “how to hold all of the lab equipment, how to one word comport oneself in a lab, what you’re looking out for, what you want to avoid, that when you have a pipette and you’re taking tissue out of a bottle and putting in a chemical to see how it is reacting to it you can’t touch the side of the glass bottle — all of these protocols that you have to learn,” she recalls.

When Margulies met with Jaax early on in the process of the project, she asked her if she was afraid to walk into Level 4 biohazard labs where she was putting her life on the life. Jaax replied that it “excited her,” Margulies says. And that, too, became a point of connection for her once she began shooting.

“Michael was a very good teacher. I felt that excitement. It became slightly real for me even though I knew I wasn’t dealing with real tissue or Ebola. The same way when I get to do a play and I get to go out on stage, there’s this thing that happens to actors on stage where the world falls away and there’s just this incredible energy for that moment, and it’s exhilarating. So I got to understand the inner workings of that kind of a brain for a little bit,” she says.

While Margulies says her experience working on “The Hot Zone” has changed her by making her more germ-conscious, she also was deeply affected by what she learned about how a disease like Ebola attacks a person’s body physically when they have it but also inflicts other damage.

“The doctors in Sierra Leone, Michael was telling me, wouldn’t shake each other’s hands. In order to get a hello, they used to hip bump or elbow bump, not even fist bump, because it was such a high risk zone but they didn’t want to get anything. And he said that after a few months you would start to get that craving for physical touch,” Margulies says.

This is depicted in the series when Jaax learns another doctor (played by Topher Grace) had sniffed a sample of the virus. They don’t yet know if it can be passed through the air, but that doctor feels she doesn’t want to sit too close to him out of fear that he has it. “It’s that moment where a person feels isolated from the rest of the world,” she explains.

“Ebola is passed through love — when we show each other affection, when we care for each other. It starts with a health worker, and then she goes home and doesn’t feel well and her husband tends to her or her daughter, and then they fall sick. That’s how it spreads — through human touch. So when you can’t have that, there’s real isolation to it, and I found that fascinating. It speaks volumes to the human condition because when you don’t have human touch you start to wilt — look at what happens to babies in orphanages if they’re not held. I think it’s all a big circle ultimately and my biggest wish is that the show just sheds a light on the fact that we need to do more. Can we please support our scientists, our pathologists, the people who know what they’re doing? Can we believe them and not give them the struggle of having to explain themselves and beg for money?”