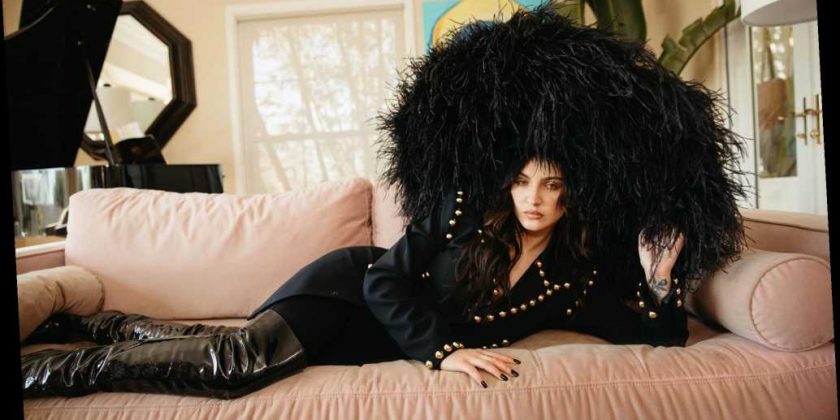 In fact, the songwriter-turned-solo artist, 27, has only been walking red carpets and starring in her own music videos for a few short years, having spent much of her career behind the scenes.

But 2021 looks to be full of firsts for the “Issues” singer, who’s prepping for the release of her debut studio album and recently landed her first fashion campaign, for celebrity favorite Christian Cowan.

“I was like, me? Are you sure this is who you want?” Michaels recalled to Page Six Style with a laugh. 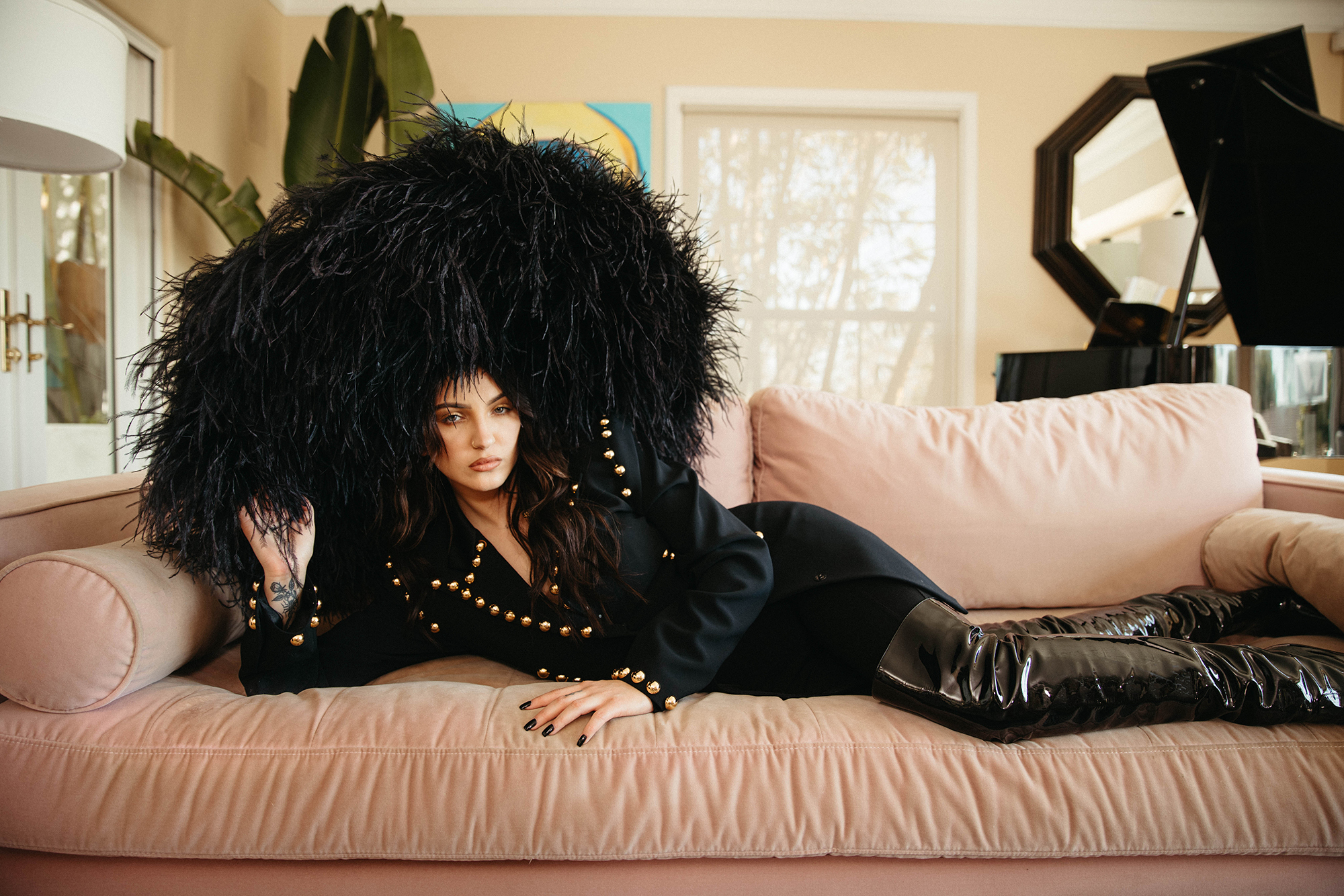 She said she was drawn to Cowan’s designs — a go-to for her pop peers like Cardi B, Lady Gaga and Katy Perry — because they featured the same sort of “cool, ‘60s psychedelic checkered patterns” that inspired her 2020 video for “Lie Like This.”

For her shoot, she posed in a studded black blazer dress, glossy thigh-high boots and an enormous feathered hat (“heavier than it looks,” she noted) from Cowan’s Fall 2021 collection. “I had to move really slow,” she joked of the over-the-top accessory, flexing her heavily tattooed biceps. “This is from that hat!” 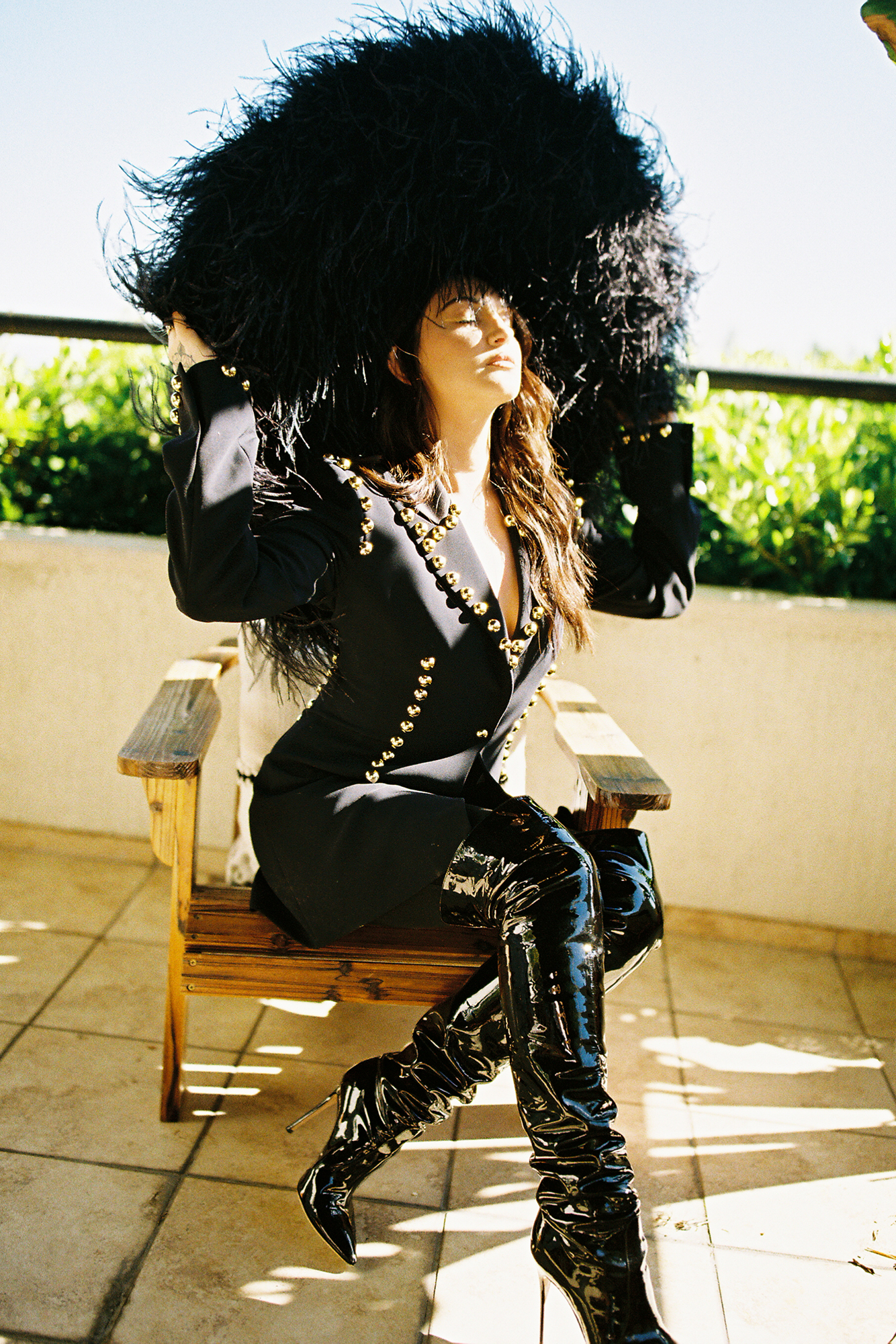 It makes sense that Michaels would gravitate toward Cowan’s maximalist creations; for the red carpet, she often picks looks incorporating over-the-top ruffles and eye-popping colors.

“I know what I like my body in,” she explained. “I’m kind of like a cereal box when it comes to the shape of my body, so anything that’s boned and corseted and gives me some sort of waist, I’m like, yes … [and] I love my tulle.”

The lavender, butterfly-embellished Paolo Sebastian Couture gown she wore to the 2018 Grammys, when she was nominated for Best New Artist, stands out as a particular favorite — although it almost cost her a “nightmarish” wardrobe malfunction. 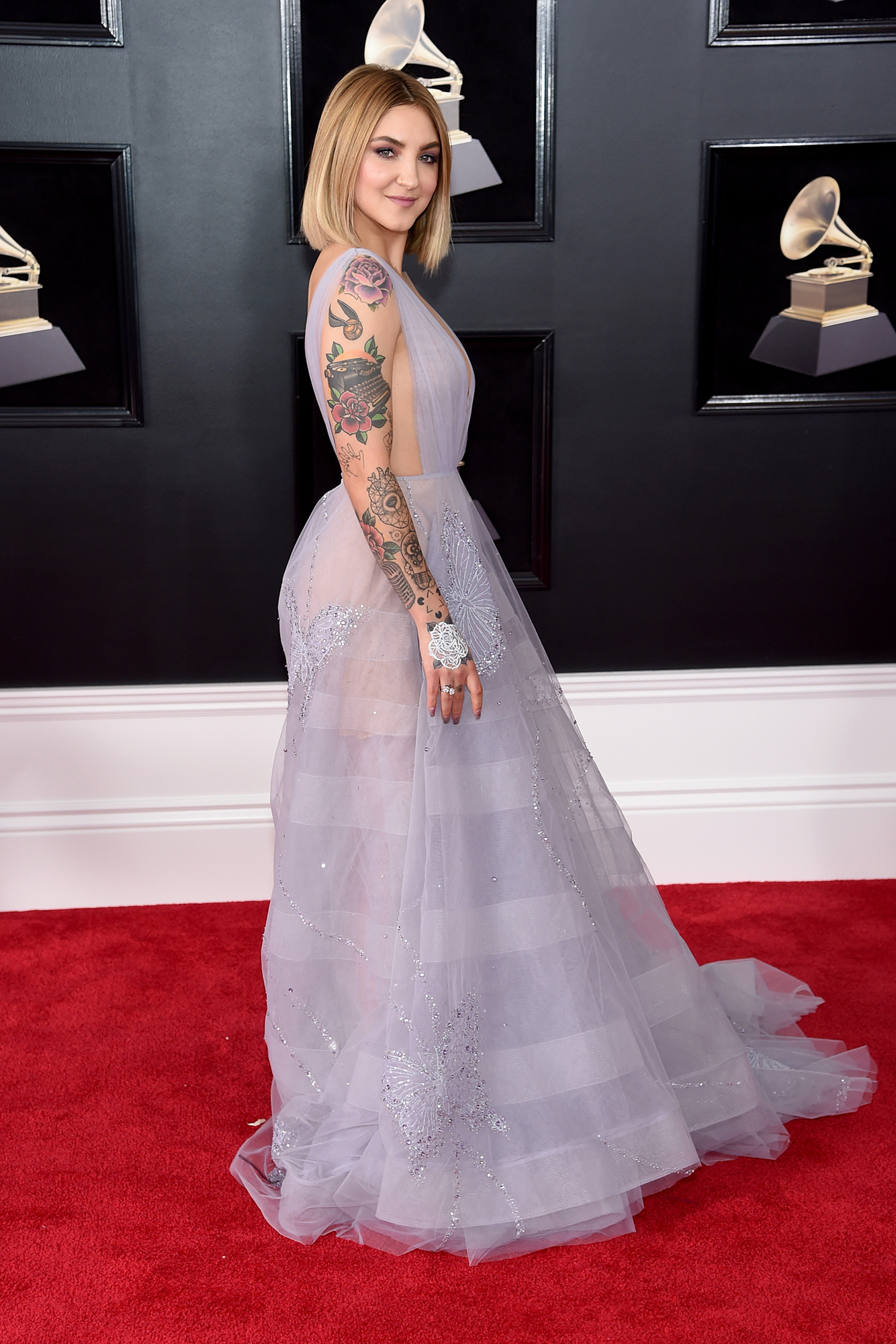 “When I first got it, it was just completely see-through,” Michaels recalled. “They had to add a lining in the back, but [they] didn’t add enough lining for my ass. They had to redo it the day of the Grammys because if not, you’d see like two-and-a-half inches of my ass!”

She’s also got fond memories of her frothy tulle Bicholla frock from the 2020 Billboard Music Awards — “I tried it on and was like, ‘I look like the hottest loofah alive,’” she quipped — but looks back at the tiered Morphew gown she wore to the same show in 2018 as a style misstep.

“I sort of looked like I was rolled up in toilet paper,” she admitted. 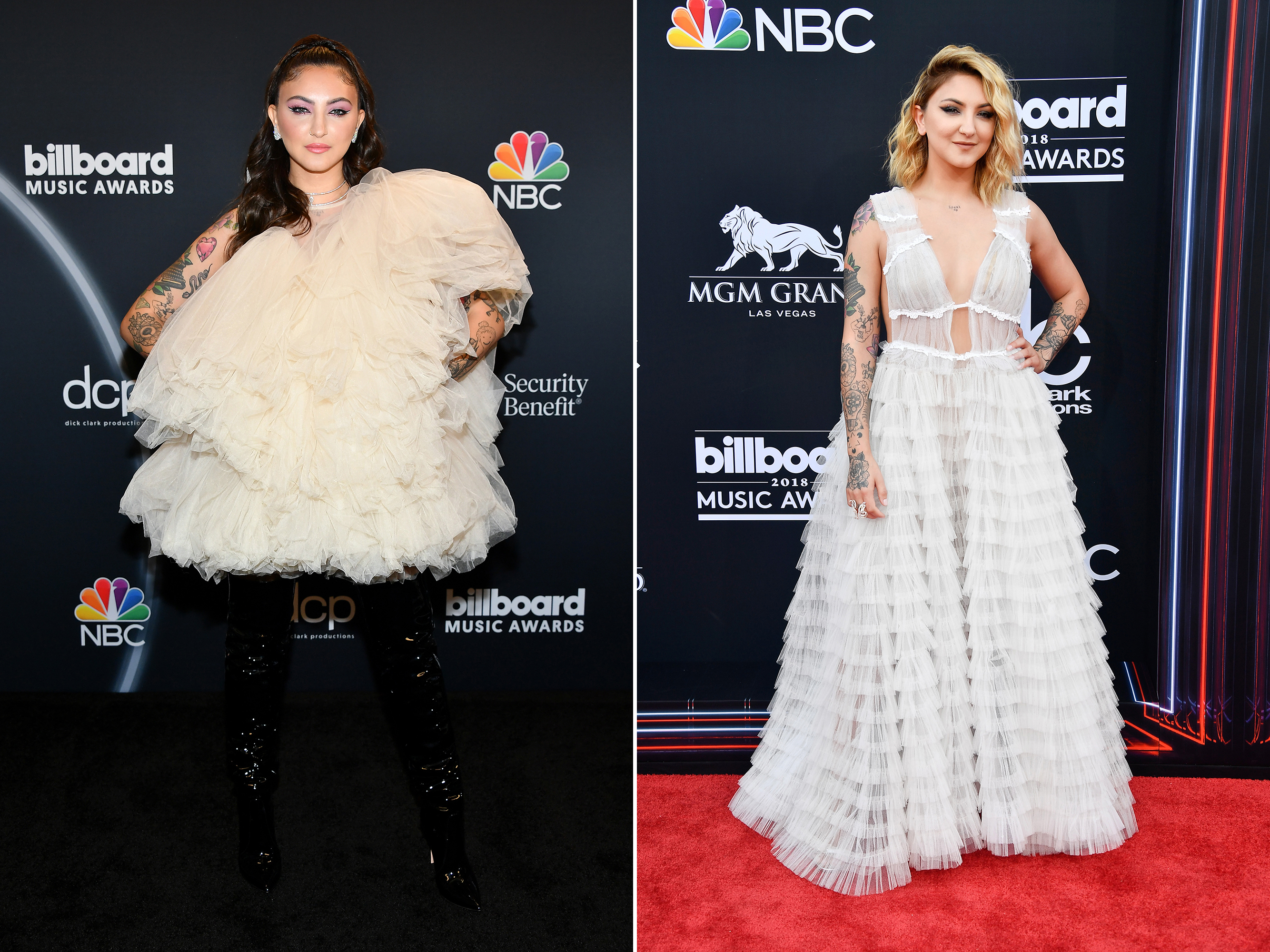 For Michaels, who’s been outspoken about her struggles with stage fright and mental health (she even penned a tune titled “Anxiety” with Gomez in 2018), fashion can help calm her nerves on a chaotic red carpet.

“Wearing something you feel comfortable in and that makes you feel good about yourself definitely helps,” she said. “For me, the thing that causes the most anxiety is the photographers; when you’ve got 40, 45 people holding cameras and screaming your name and telling you to look left and look right … it’s so overwhelming. At least if you’re wearing something you love, you can focus on [that].”

Michaels also isn’t afraid to challenge beauty standards. Last May, she announced her intention to stop shaving her underarms on Twitter, joking, “Social norms can eat an eggplant.” 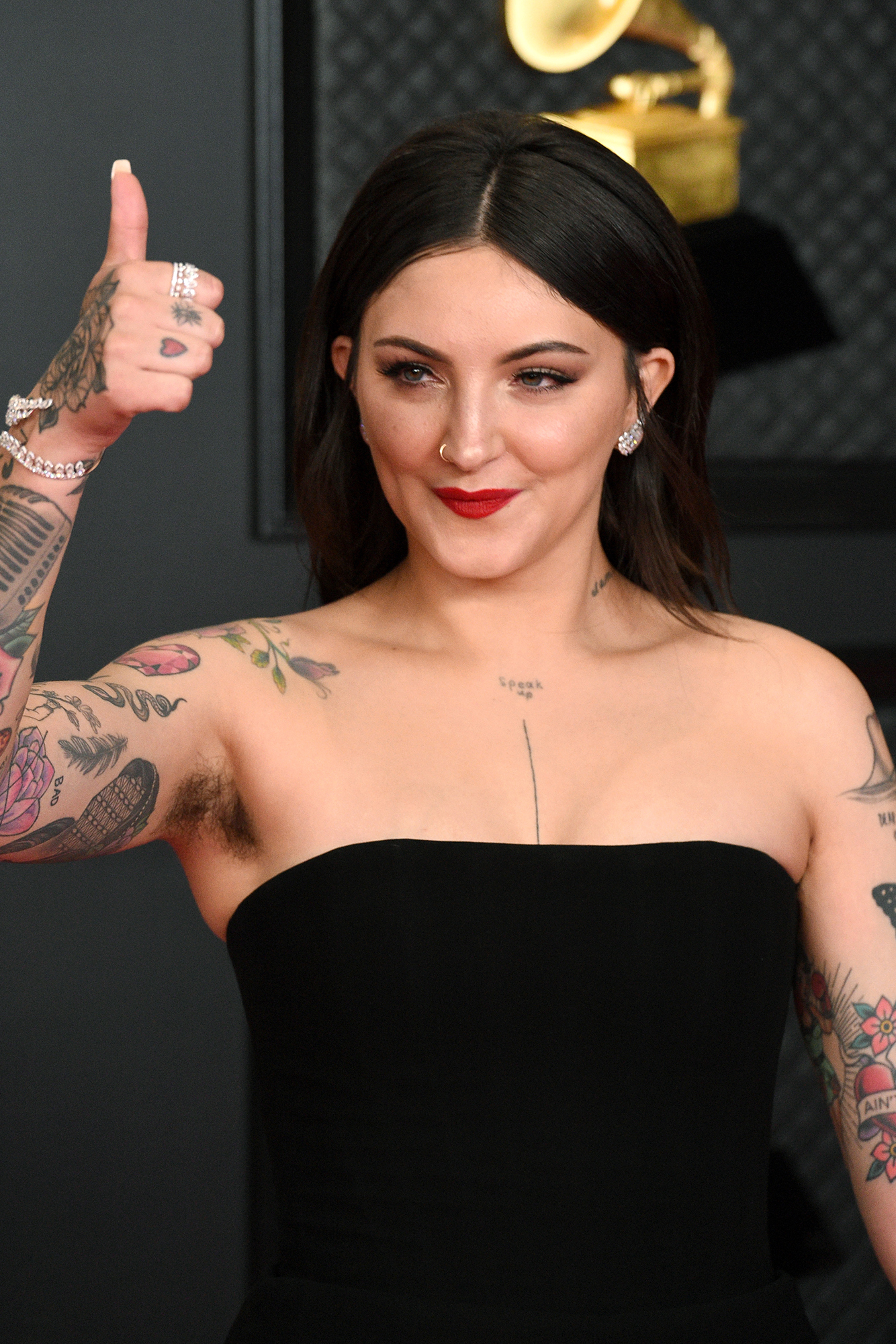 The “Heaven” singer was initially inspired to ditch the razor after a pre-pandemic trip to Paris with pals.

With the support of her boyfriend, fellow musician JP Saxe — he “[thinks] it’s sexy,” she told us — Michaels stuck with the look, proudly baring her body hair in her “Lie Like This” video and at the 2021 Grammys, to plenty of praise along with the usual criticism.

“It’s really wild how many people think they can comment on your body. It’s pretty gross,” she noted, adding that she can’t believe that aversion to natural underarm hair is “still a thing.”

“I honestly think it’s super liberating,” she said. “And I don’t even really show my body off that much, so sometimes it feels like it’s my own little ‘f—k you’ to society.”