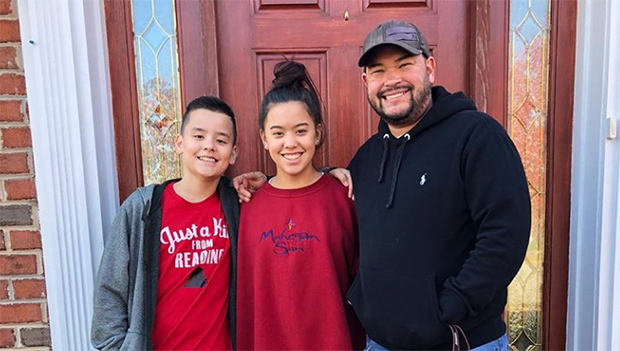 One week after Jon Gosselin won custody of his son Collin, HL caught up with the former reality TV star for an EXCLUSIVE chat about his relationship with his seven other children. He revealed how long it’s been since he’s last spoken to them!

Jon Gosselin’s home will be getting fuller by Christmas, after he won temporary custody of his 14-year-old son, Collin, on Dec. 4. Fresh off his win in court and with daughter Hannah, 14, already under his care, the former star of Jon & Kate Plus 8 is still not done in repairing family bonds. Jon admitted it feels “good” that his effort “to win” Collin’s custody led to a victory, but pointed out that there are his six other children he’s “trying to have a relationship” with, the father EXCLUSIVELY told HollywoodLife at WeTV’s Real Love: Relationship Reality TV’s Past, Present & Future panel in Los Angeles on Dec. 11.

“I still miss my other kids as well,” Jon, 41, continued to tell us, and estimated that it’s been six years since he’s seen or spoken to the other sextuplets — Leah, Alexis, Joel, Aaden, in addition to twins Cara and Mady — in person. “It’s kind of hard to play favorites when you still have that. It’s not like we live 100 miles apart,” Jon explained, as he and ex-wife Kate Gosselin, 43, both live in Pennsylvania. In addition to Hannah and soon, Collin, Jon now lives with his girlfriend, Colleen, and her two college-aged children that occasionally visit home (below). Since Jon resides just about “five miles down the road” from Kate, he confessed that it’s “weird” and “very strange” that he only gets to see his other children from afar. The father admitted that he didn’t know how it became that way.

“It’s awkward, but I don’t know why they don’t like me or if they don’t like me,” he told us. “I don’t know.” But the father of eight doesn’t want to pry, as he explained, “I don’t really ask. If it’s uncomfortable for them or whatever’s going on, that’s up to them, so I kind of just stay. I don’t want to make it uncomfortable for them or uncomfortable for Hannah — Collin doesn’t really know because he hasn’t transitioned yet. I’m kind of just waiting until it all happens.” As we’ve told you in the other half of our interview with Jon, Collin will be making the move into his new abode “before Christmas.”

As he plays the waiting game, Jon especially hopes that his eldest children — twins Mady and Cara, 18 — initiate contact first. “I hope Mady and Cara reach out to me at some point just to be like, ‘Hey, let’s get coffee.’ We tried a couple years ago and then it fizzled out,” he said. “I’ve tried and then there’s nothing. Maybe when they get older. It’s different now because they’re adults. It’s just a different space.” Mady, who just celebrated her and Cara’s 18th birthday in October, has previously chided her father for speaking about them in interviews. “He makes it seem like we’re being kept from him, which is insane,” she told People in a 2016 interview. “He should maybe spend some time thinking about why we don’t want to see him, and maybe realize that if he ever does want a relationship with us, talking about us on TV is not the way to make that happen.”

However, Hannah is on better terms with the rest of the Gosselin family. “Hannah still has a relationship with all of those kids, so as long as they still have their sibling bond, I’m fine with that,” Jon added, who also noted that he wants Collin and his sister to have a “sibling relationship” with their other brothers and sisters. Like Jon, Collin also isn’t on speaking terms with the rest of the Gosselin children.