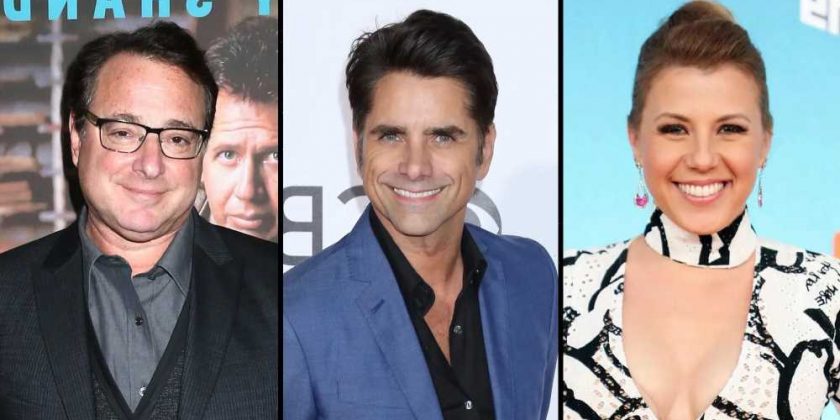 Gone but never forgotten. Jodie Sweetin opened up about how Bob Saget’s presence was felt at her wedding following his death – and it involved John Stamos’ wardrobe.

“John was getting ready to leave the house, I guess, and [his wife] Caitlin [McHugh] looked at him and was like, ‘You can’t wear that shirt. That shirt’s not working. It doesn’t look good,’” Sweetin, 40, recalled to E!’s Daily Pop in an interview published on Tuesday, August 16. “He’s like, ‘Ugh, fine.’ So he goes up to his closet, grabs a black button-up shirt, gets in the car. He’s like ‘Why is this shirt so big? Why is this shirt so big?’ He realized it was one of the shirts [Bob’s wife] Kelly [Rizzo] had given him out of Bob’s closet, and it was this black button-up that Bob would always wear.”

Sweetin continued, “It was Bob’s shirt, so Bob was there in this weird little way. I hugged John and then l like, kissed the shirt. I was like, ‘Bob’s here too.’”

The UnSweetined author and Stamos, 58, starred alongside Saget on the family comedy Full House from 1987 to 1995. The trio — along with the majority of the Full House cast — later reprised their beloved roles in 2016 for the Netflix spinoff Fuller House until the series ended in June 2020. Saget, who played iconic TV dad Danny Tanner on the original series and its spinoff, passed away two years later, after suffering a severe head injury while on tour.

In February, Sweetin opened up about what she had learned from being close to the comedian for so many years.

“One of the things I learned from Bob and, you know, even now in having to walk through his death and everything is how to laugh through some of the most painful moments of your life,” she revealed on Good Morning America at the time. “He never lost the ability to laugh at himself, to laugh at his situation, to make fun of something that would otherwise feel like it was going to break you. That was Bob.”

While Saget wasn’t present for the Illinois native’s big event, in which she tied the knot with husband Mescal Wasilewski, Rizzo, 43, was in attendance – and confirmed the former America’s Funniest Home Videos host was there in spirit.

“What a honor it was to be there and celebrate your love,” the Eat Travel Rock host commented on the bride’s celebratory Instagram announcement. “I know Bob was right by my side. Love you so much. ❤️❤️❤️❤️❤️❤️.”

Despite missing her TV dad, Sweetin still referred to her wedding as the “perfect day” with many of her Full House family in attendance, including Stamos, Candace Cameron Bure, Andrea Barber, Lori Loughlin and Dave Coulier.

Stamos, for his part, also took to social media to share his well wishes with the bride and groom. “The second best wedding I’ve ever been to. love you Jodie! (And Hubby),” the Scream Queens alum wrote.