Skills and Training Minister Brendan O’Connor says the building industry won’t be the lone priority of the new government’s workforce agenda as it shifts away from “hard-hat” rhetoric and prepares for a white paper setting out its plans to tackle skills shortages across Australia.

O’Connor said the responsibilities of his portfolio would be at the core of Prime Minister Anthony Albanese’s upcoming jobs summit, where employer groups will push for the skilled migrant intake to be lifted and changes to enterprise bargaining. 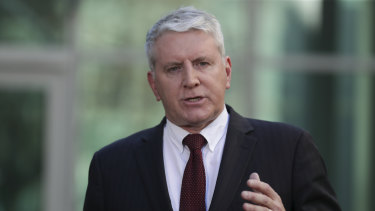 Skills and Training Minister Brendan O’Connor says driving economic productivity is “not just about hard hats”, it’s about investing in all sectors of the labour market suffering skill shortages.Credit:Alex Ellinghausen

O’Connor, who held similar portfolios in the Rudd-Gillard governments, highlighted healthcare as an area of concern, saying the needs of the sector and its workers were too often ignored by the previous government.

“Driving economic productivity is not just about hard hats, it’s about investing in all sectors of the labour market suffering skill shortages, whether that be healthcare services, retail, IT, financial services, education and training or other areas experiencing a skills deficit,” he said.

“The summit and ensuing white paper are a pivotal opportunity to bring together experts and insight across small and large businesses, unions, government, training providers and others to develop proper skills policy to bridge the current and growing skills gap.”

Australian Medical Association president Dr Omar Khorshid said his sector was short “thousands and thousands” of healthcare workers and the government should encourage skilled migration as a short-term solution by reducing or scrapping visa fees and subsidising health insurance.

Along with aged-care providers, he also called for a moratorium on labour market testing, which requires employers to prioritise local recruitment before searching abroad.

“We need to tell a positive story about Australia and reduce financial barriers to make it more convenient for people to come,” Khorshid said.

Australian Industry Group chief executive Innes Willox wants the summit to consider greater concessions in the temporary visa program to target areas with “chronic” skill shortages while Australian Chamber of Commerce and Industry’s Andrew McKellar called for the permanent skilled migrant intake to be lifted to 200,000 for at least the next two years.

Business Council head Jennifer Westacott said Australia needed to be more attractive for women to work, while pathways to permanent migration for overseas workers should be made easier.

Employer groups have also flagged plans to revive the debate over changes to enterprise bargaining at the summit, which is likely to be held by the end of September, and Treasurer Jim Chalmers said this week the gender pay gap would be addressed.

O’Connor said his priorities in addressing Australia’s skills shortage would include boosting opportunities for apprentices, supporting clean energy and manufacturing, and creating Jobs and Skills Australia, an agency to advise the government.

“This is a significant economic portfolio and our focus will be investing more effectively to ensure we realise a highly skilled workforce driving economic growth while affording better job opportunities for Australian workers,” he said.

Australian Council of Trade Unions secretary Sally McManus said during the week the government needed to urgently look at legislating 10 days’ paid domestic violence leave into the national employment standards, while the summit was an opportunity to look at wage growth and enterprise bargaining.

As travellers faced lengthy airport delays heading into the long weekend, the Transport Workers’ Union called on the government to help attract workers back to the aviation industry and address labour-hire arrangements used by airlines.

Property Council of Australia chief executive Ken Morrison said there was an urgent need for the government to turn around net migration “and move it from a trickle at the moment to a fast-flowing stream of skilled workers, frontline staff and international students”.