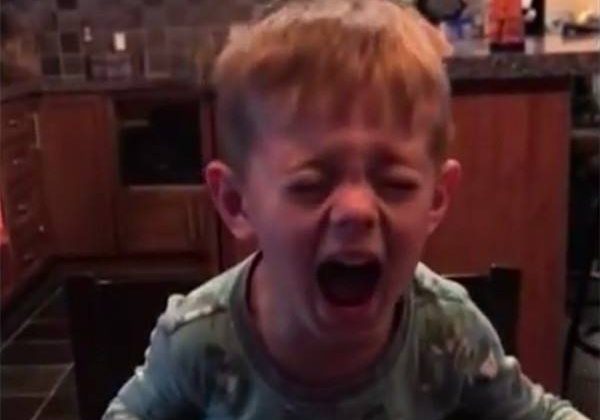 For the last eight years, Jimmy Kimmel has convinced parents around the world to trick their kids into thinking they’d eaten all their hard-earned Halloween candy after a night of trick-or-treating. “Once again, you really answered the call,” Kimmel told viewers Thursday. “We got over 1,000 videos; we went through all of them. We narrowed it down to the best of the best.”

As is true every year, some kids cried and some kids screamed, and nearly all of them couldn’t understand why their parents would do such a thing. Said one girl, “I’m so disappointed at you.” One kid showed concern for his father’s health (“He’s gonna get sick! Then you can poop! And my daddy can poop—all over this floor!”), while another merely shrugged as his brother wailed. Two kids became violent, with one punching his dad’s head and the other hitting his dad’s arms.

Of course, some kids took the news better than others. After one mom asked her son if he was mad she ate all his candy, he replied, “I’m not mad at all. I’ll never be at you because you’re my mom.” Disappointed her joke didn’t work, the mom told her son, “You’re too sweet. It’s gross.” Others were similarly understanding, with one little girl smiling and saying, “I forgive you mommy. I love you.” Another little boy told his mom, “I’m telling you: candy is not that special!”

But, when one father asked his daughter if she likes Kimmel, she sniffled and said, “No!” After another mother blamed Kimmel, one of her sons shrieked, “He’s an idiot! He’s a freakin’ idiot!”

One kid proved to be too smart for his mother, who had made the mistake of showing him a past challenge. “Oh, no. This is fake. I know this,” the young boy said. “You have showed us the videos! I know!” Another kid was similarly skeptical about the prank, telling his parents, “Wait! Jimmy Kimmel! Do you know how many years do you think you’re going to get away with his?”