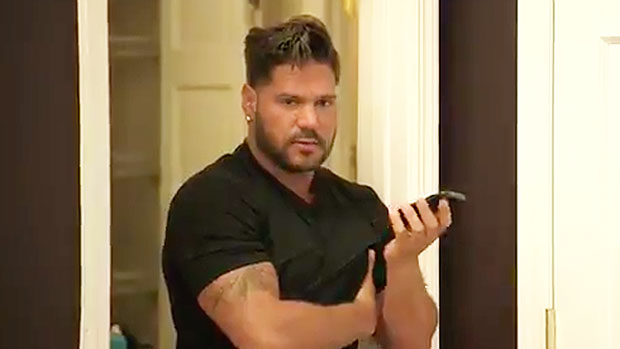 After several days of not talking, Ronnie gets a call from Jen on the finale of ‘Jersey Shore,’ and she claims their home was invaded and robbed — but his roommates don’t believe it for a second.

Ronnie Ortiz-Magro ended things with Jen Harley earlier this season on Jersey Shore: Family Vacation, but she called him with some troubling news during the Dec. 13 finale. “Jen’s telling me that someone broke into the house,” Ronnie explains. “A guy came into the back door and ransacked the house. She’s laying in bed, she heard shuffling, he saw that she moved and he just f***ing ran out.” Despite his troubles with Jen, Ronnie is understandably worried — after all, their daughter, Ariana, was in the house, too.

“It’s not easy, hearing what you’re telling me and being over here, f***ing across the country,” Ronnie tells her. “That’s scary s***. The whole thing is freaking me out.” Jen assures Ronnie that the only things missing are her phone and a friend’s laptop, but adds that a further search of the property revealed that bullets were also discovered in the backyard. “This is the first time I’ve had contact with Jen since she disrespected me in a way that I’m not going to deal with,” Ronnie says. “Now, I have to communicate with her. We have to do some kind of security ASAP. At the end of the day, that’s still the mother of my child and I have to make sure she’s okay, because if she’s not okay, then my child’s not okay.”

Ron urges Jen to take Ariana and “get the f*** out of the house.” When they broke up a different time over the summer, Ronnie got a second property, and begs Jen to go there instead. “Someone broke into your house while you were sleeping and you find a pack of bullets in the backyard — I think you should get the f*** out of there,” he repeats. “Please leave now. Now you have me f***ing scared and I’m halfway across the country. I don’t want you in that house with the baby. You have another house that no one knows about. They’re not gonna get in. Just go.”

Despite Ronnie’s concerns, though, his roommates aren’t convinced that Jen is being completely truthful about the whole thing. “I don’t buy it,” Pauly ‘Pauly D’ Delvecchio insists. “Not for one second. Jen is up to no good. The last time I talked to Ronnie, he blocked Jen. I think she’s just doing this to get Ronnie to talk to her.” Angelina Pivarnick agrees, adding, “You’re right. She’s lying. She probably did it. This girl is so vindictive, so evil.”

In his confessional, Mike ‘The Situation” Sorrentino points out, “This is definitely a bit fishy. He had his baby mama blocked. She was moved out of his house. But now, she’s coming up with a whole new development saying there was a home invasion…” Mike and the guys decide to take Ronnie out to lunch to confront him about the situation, but he’s not hearing it.

“She wouldn’t do that,” Ronnie insists. “F***ing tell a lie about getting robbed — she wouldn’t do that with the baby. If there was no baby, then I’d be like…it’s probably made up.” Mike tries to get his point across to his friend — “You get run over by a vehicle AND have a home invasion in the SAME month?!” he pushes — but Ronnie still doesn’t seem convinced.

“She’s done so many crazy things to you,” Vinny Guadagnino says. “Why is it impossible for her to lie about this? I think he just conjures stories in his head about her being a trusting person.” Meanwhile, as all of this is going on, Deena Cortese is planning a huge fundraiser in her father’s memory, and she lets Ronnie know that she’s totally cool with him missing out if he has to fly back to Vegas and deal with the drama.

However, he decides to stick around for one more day. “I feel better now that Jen and the baby are staying at my house, so I want to be here for Deena,” Ronnie explains. “I feel like with all the bad s*** going on, I need to do something good to give me some good aura. So, I’m gonna book the next flight out in the morning and it’s gonna be fine.”

By the end of the episode, it’s not confirmed whether or not Jen was lying, but Ronnie seems hopeful about what’s ahead. “I don’t know what’s next in my life,” he reveals. “I just need to start focusing more on the positive things in my life. A lot of s*** has happened to me. Me and Jen have fought, but at the same time, there’s good things in my life. I have a beautiful daughter, I have wonderful friends and I think once I start focusing on the good, good things will start happening.”

This episode was filmed at the beginning of August, and from photos, we know Ron and Jen were definitely back together by the middle of that month. Now, four months later, they are still together, although there hasn’t been a total lack of drama in the time since. It’s a roller coaster with those two!