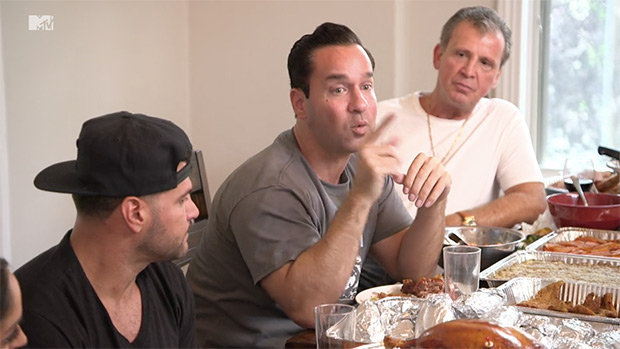 The ‘Jersey Shore’ cast gets together for Friendsgiving in a special Nov. 15 episode, and we have an EXCLUSIVE sneak peek of what made The Situation get a bit emotional during the meal. Watch here!

Mike “The Situation” Sorrentino has been through a LOT over the years — most notably, his journey to get sober and stay sober. In an EXCLUSIVE clip from tonight’s Jersey Shore Friendsgiving special, The Sitch and his roommates look back on some of his more wild times, and it makes him quite emotional, as he realizes his castmates have stood by him through all the ups and downs….even though he didn’t always treat them so well over the years!

“As much as I have to say that hitting the wall was very unpleasant, it turned out to be a turning point in my life,” Mike admits in the preview. “I eventually went to rehab a couple of months later and it was the first time I wanted to make a change in life — that i thought the old me wasn’t working and I needed to find a new way. Now I’m here to day, three years clean and sober. And i’m so grateful that I have every single one of you guys in my life today.”

This December, Mike celebrates three years of sobriety. He also just got married to his longtime love, Lauren Pesce, who he dated in college and then reconnected with after filming the original Jersey Shore series. Plus, Mike and Lauren recently told HollywoodLife EXCLUSIVELY that they’re already hard at work trying to make their first baby, so kids might be on the way sooner than later!

Unfortunately, Mike still has one more barrier to cross in 2019 — he’ll serve eight months in prison for committing tax evasion. Luckily, he’ll have his Jersey Shore pals supporting him as he gets through it! The Jersey Shore Friendsgiving special airs Nov. 15 at 9:00 p.m. on MTV, after this week’s Jersey Shore: Family Vacation.