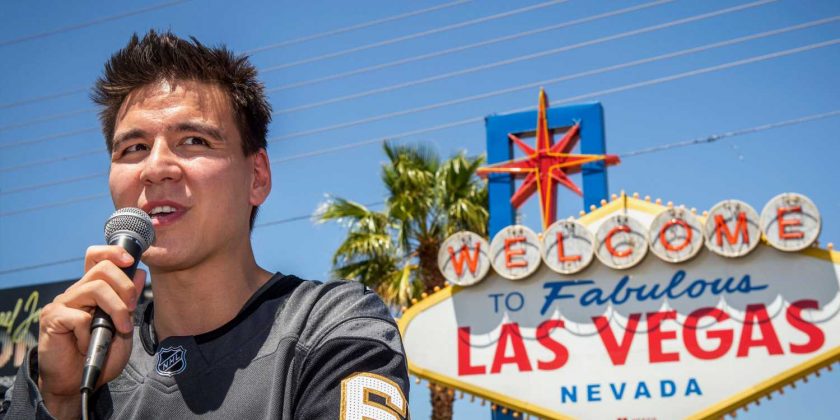 Wearing dress shoes, not so much.

But “the biggest thing he learned [was] … that his shoes were uncomfortable,” said James’ brother, Ian. “He’s not accustomed to formal shoes, so he got insoles.

“James’ last formal job was at Brown’s Chicken serving fried chicken at 16,” Ian added. “Since that time he’s kind of skipped that entire phase of life where you work in an office and have a boss.”

James’ success has taken the world by storm. Tom Brady tweeted that he would eat a strawberry — his least favorite food — if James lost. (He didn’t). He’s even being courted by his idols.

“My favorite author, Chuck Klosterman, saw that I dropped his name in an interview and sent me an e-mail to talk about football and gambling,” James told The Post.

He just returned from a family trip to Sicily and Malta, as “Jeopardy” taping is on hiatus until the fall.

The game-show star grew up in ­Naperville, Ill., with his mother, Nachiko, father, Juergen, a chemical engineer, and brother, Ian, 36, now an attorney.

His unusual brain power was apparent from a young age.

“I could have turned to him when he was 6 years old and said ‘What’s 1,324,721 divided by 757,327?’ and he could have given me that answer to three decimal places, without skipping a beat,” said Ian. “I didn’t need to have a calculator because he could have done any long math problem you could imagine.”

‘When gambling, I look — within the rules — for any possible edge that can improve my bottom line’

James’ middle-school teacher and math-team coach, Suzanne Croco, calls him a “prodigy.” But, she said, the “Jeopardy” star wasn’t exactly an A+ student.

“He had trouble sitting in his seat. Sometimes he would write the answers to a problem on a piece of paper and tape it to his pencil like a flag and wave it in the air,” said Croco, adding that James skipped second grade.

Despite his father’s strict rules regarding television, a young James managed to sneak in episodes of “Jeopardy” growing up.

“When his dad was at work, James and his grandma would watch together,” said James’ stepmother, Allie.

While an undergrad at the University of Illinois, where he studied math, James eschewed classes to play poker, according to his longtime pal Grace Yaguchi.

“James was in an organic-chemistry class in college and went the first day and got the syllabus but never showed up,” Ian added, noting that his brother figured he would still take the final exam and pass. “[But] he never knew the date of the exam got changed since he never went to class and he ended up flunking.”

James nonetheless managed to graduate and moved to Las Vegas to focus on sports betting while living with four other gamblers.

Ian recalled visiting the place: “They had a ‘war room’ with eight TVs up against the wall and they had every single sports channel you could imagine going at the same time and they were there with laptops and big 64 ounces of Coke, working. [My wife and I] had our 1 and a half-year-old with us, who was starting to crawl, and there was so much debris on the floor, we were nervous.”

But Las Vegas lured James back, and he returned with his wife and daughter, now 4, in 2016.

Now he’s putting his Sin City skills to use on the game show.

“When gambling, I look — within the rules — for any possible edge that can improve my bottom line,” said James. “My ‘Jeopardy’ strategy is simple but effective: get some money, hit the Daily Double, bet big and hope to get lucky.”

And when his luck finally runs out, he has plenty of opportunities ahead of him.

Ian noted that his brother may finally get his dream job — as a pro-baseball general manager — and said multiple teams, including the Oakland Athletics, have publicly expressed interest in recruiting James.

The champ himself isn’t sweating it, however.

“For now I expect to resume gambling when football season commences,” he said.