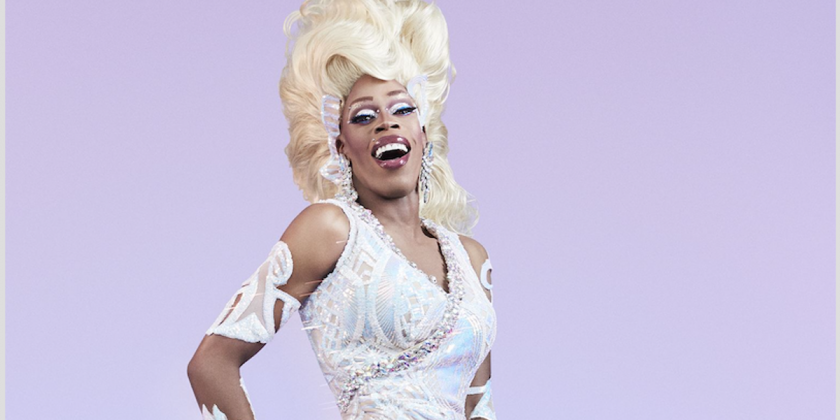 Spoilers ahead for the RuPaul’s Drag Race: All Stars Season 4 premiere. Jasmine Masters didn’t need Justin Bieber to share her Instagram video to become an all-star, but it definitely helped. Since sashaying away from Drag Race Season 7, she’s been deemed the "meme queen" and started creating all kinds of zany videos on social media. In fact, she tells Bustle she was hosting an Instagram Live when she got the call about returning to the werkroom for All Stars Season 4. Unfortunately, she was the first to be sent home. But according to the queen herself, Jasmine Master’s All Stars elimination wasn’t just the result of her performance. It was also about her relationship with the queen in charge.

Although it might sound like it, there is "no tea, no shade, no pink lemonade" here, as Masters often says. Trinity "The Tuck" Taylor won the "All Star Spangled Variety Show" with her hilariously tongue-in-cheek tucking tutorial, so she had the power to decide which of the bottom two queens would be sent packing: Jasmine or Farrah Moan.

"I kind of figured that I would be the one to go home, because her and Farrah … they’re closer than me and Trinity," Masters explains over the phone. But she didn’t seem to be upset by the move, because she knows that if she was in that position, she would’ve chosen her friend, too.

"If you had Latrice [Royale] on the bottom, because me and Latrice are closer than any of the girls there, I’m gonna keep my friend on," she says. "Even if Latrice was strong competition for me. But you wouldn’t send your friend home, ya’ll would just work it out together."

That may not seem fair, competition-wise, but Masters says all the queens know what they signed up for. Just as it has on past All Stars seasons, the added layer of history and friendship among competitors will likely make for a tense Season 4.

"It’s a game. And that’s how the rules are for the game," Masters says. "That’s how they designed it to be. So it’s fair. It may not be right, but it’s fair, because that’s in the game rules."

In an homage to her online comedy clips, Masters chose to perform a standup routine as her talent in the variety show. While all of the queens worked to prepare their gigs backstage, some of them asked her if she planned to outline her act on paper, just to be safe. Despite their urges to think her act through and take notes, Masters decided to do things her way and wing it.

She based her act off of her video that Bieber made viral — a bit about people with bad breath. And unfortunately, it didn’t go over as well with a live audience. It’s safe to say she could’ve benefited from taking her sisters’ advice, but nevertheless, she stands behind her decision.

Although she’s spent nights on stage at The Laugh Factory, Masters doesn’t claim to be a comedian. "What I did learn [from All Stars] is that some people will like what you do and some people won’t like everything you do," she says. "One of the critiques I did recognize and I did get [from the judges] was, you have to have a start, middle, and finish. And that’s how I do my music. If I’m doing a mix, I make sure there’s a start, a middle, and an end. And I didn’t put the start, the middle, or the finish in my routine." But overall, she’s happy with how it went and wouldn’t change a thing.

"I would just let go how it went because I learned some things from that," she says. And now, she can get to organizing her one woman show tour, and of course, creating meme-worthy content for the internet. All of her YouTube videos are like a mini-episode of Drag Race, except your favorite queen, Masters, never has to leave.