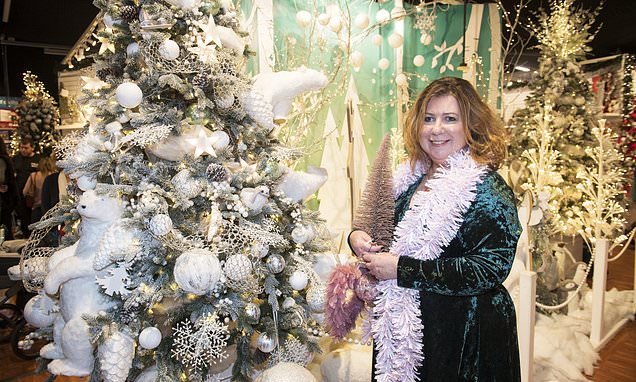 Forget Lapland folks, here I am in the beating heart of Wagland — a store in the North-West of England which has become famed for the extravagance and wonder of its wagtastic Christmas decorations.

In Bents Garden & Home Centre, just outside Warrington, nothing says Christmas more than a themed 10ft fake fir tree, covered in polystyrene animals and a thousand baubles, hosed down with glitter and ostrich feathers.

Megan Davison, the fiancee of Everton and England goalkeeper Jordan Pickford, has already shown off her Bents tree on Instagram; a marvel of sparkly fauna including polar bears, penguins, hedgehogs, butterflies and horses. 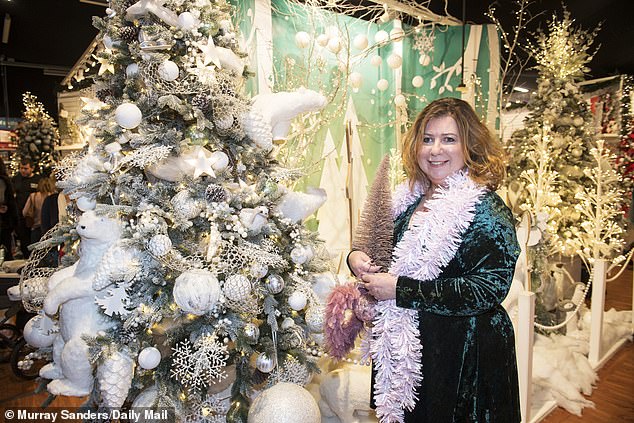 Jan Moir visited a garden centre which is famed for its Christmas decorations. Moir, above, writes she is in ‘the beating heart of Wagland’ in Bents Garden & Home Centre outside Warrington

It’s hard to work out what her festive theme is, but Polar Roadkill must be a contender.

Meanwhile, chief Wag Coleen Rooney buys her tree and trimmings at Bents every year, and usually posts a photograph of these decorations on social media.

The following year Coleen went for an owl theme, and when I say ‘theme’ I mean the tree was covered with dozens of Bents snowy owls who looked startled to find themselves perched en masse in the Rooney sitting room. 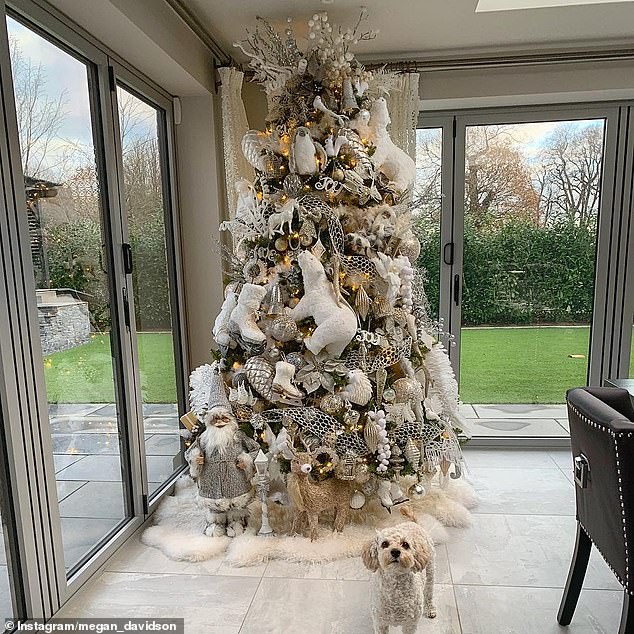 Megan Davison, the fiancee of Everton and England goalkeeper Jordan Pickford, shows of her Christmas tree. The tree is decorated with polar animals

Look at their sparkly little faces! Tu-whit tu-why, they seem to cry.

I pop one into my basket and carry on shopping, perusing the 2018 decorating themes which include Festive Fusion (butterflies, peacocks), So Magical (unicorns), Rural Retreat (more owls) and Rose Tinted (think pink).

Considering the environmental impact of all this junk, perhaps there should be a theme called The Landfill Look. 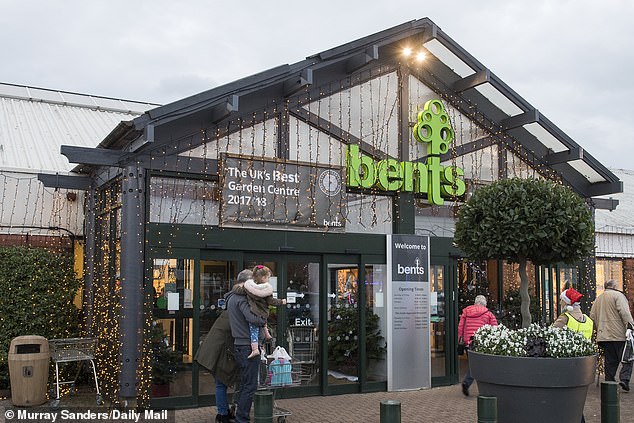 While some might say Bents is a place where good taste comes to die — a torrid snowscape of stuffed reindeers, pre-lit plastic icicles and frosted unicorns — others adore roasting their eyeballs on this festive fiesta of sparkle and preposterous bling, marvelling at the excess.

Whatever your opinion, all must agree that there is nothing half-baked about this particular Alaska. With Liverpool to the west and Manchester to the east, Bents is in a prime position to capture and accommodate the demands of the Wag trade.

The footballers’ enclaves of Alderley Edge and Wilmslow lie to the south, groaning with McMansions which are crying out for blingtastic festive decor.

And if you can’t come to them, Bents will come to you.

The energetic and successful company, which has been owned and run by the Bent family for 81 years, offers a bespoke Christmas at Home service.

The decorating team will turn up at your house to install and fully decorate the tree of your dreams, with prices ranging from £1,500 to £3,500 and beyond, depending on bauble density. 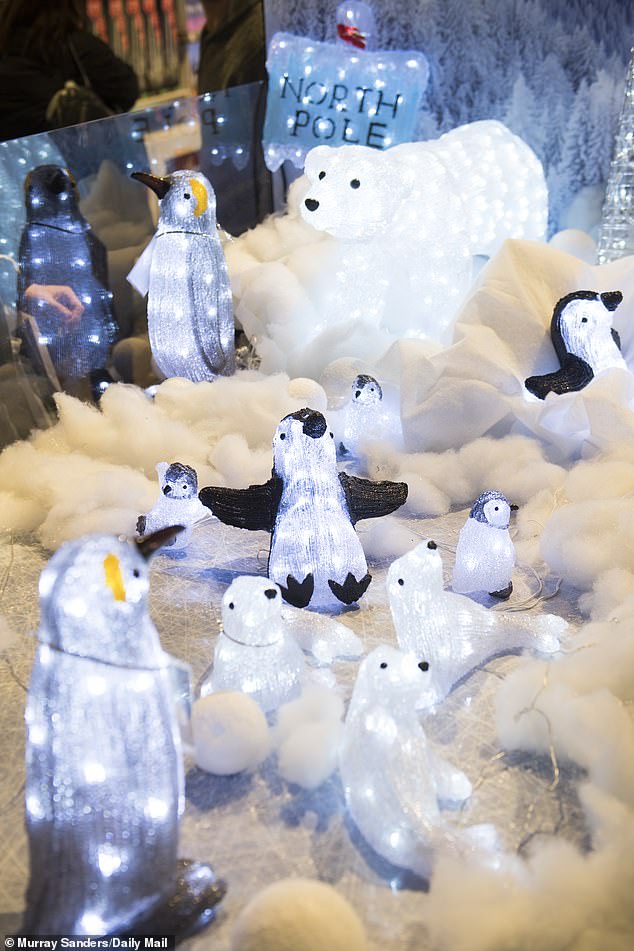 The display shows light up penguins and polar bears. The company Bents also offers a Christmas At Home service

The service can also include additional dressing such as wreaths and garlands — but if you want to order the service this Christmas, darling, you are already too late. The book is completely full, like it is every year.

A classic fully decorated Bents tree, like the Rose Tinted display model instore, has a base of a plastic 6½ft Snowy Dorchester Unlit tree, which is barely visible beneath a blizzard of silver baubles, frosted doves, jewelled berries, wire-trimmed ribbons and topped off with a spray of sparkly pink fern leaves.

To be honest, it looks more like a creepy tepee than a Christmas tree; a wigwam of bizarre glam that has become an object of festive lust for a huge number of female shoppers. One of them is shocked to discover that the £65 pink velvet tree garland with the pearl stud trim has sold out.

‘But there is one on that tree,’ she says, ready to pounce and rip it off with her bare hands, if needs must. ‘You can’t take it off. It’s wired on,’ says an assistant. The woman walks away, crushed.

This garden centre started off humbly in 1937, when Alfred and Margaret Bent started growing and selling roses in their own front garden. Now it has a dedicated Christmas team who travel the world to source the most fabulous and innovative decorations.

They even supply other similar-minded retail outlets, which is why fans who live far away can still access the ultimate Bents look; including TOWIE star Gemma Collins and Rebecca Vardy, the wife of Leicester City’s Jamie Vardy.

What is the appeal? Bents specialises in a kind of Disney-esque, Kardashian-rich festive decor that strips out the natural and the genuine, replacing it with an explosion of plastic fantastic. 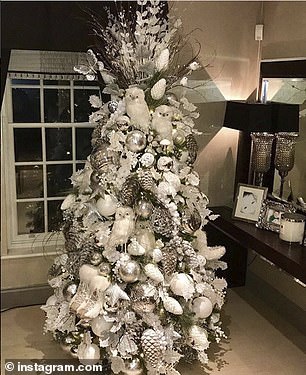 They want it large, they want it sparkly, they want it to appeal to their inner child who still hankers for glitter stickers and My Little Pony panache. Of course, the Wag fondness for acrylic has already been noted.

They like acrylic hair extensions, they like acrylic nails, some of them even have acrylic body parts. No wonder they love these acrylic teddy bears (£9.99), this waddle of acrylic penguins (£24.99) or even this £299 acrylic Northern Lights Jewelled Stag With Disco Lights.

Is he for indoors or outdoors? No one is sure, but at least one Wag will be scratching her head and thinking Jewelled Northern Stag? Didn’t I used to go out with him?

Today, Bents is a 200,000 sq ft retail space and a destination in its own right, with TripAdvisor ratings, Yorkshire Pudding Wraps on sale in the cafe and a typically British festive atmosphere on Advent Sunday.

As I get my picture taken, a nice gent approaches. ‘Are you posing for your Christmas card, lovey?’ he asks, giving me the sort of kindly, encouraging look used when addressing a great aunt who’s gone to the shops in her nightie again.

Outside, as Christmas carols are piped across the 900-vehicle capacity car park, drivers fight over parking spaces. Inside there are long queues at the tills and frazzled tempers.

‘I must have this!’ shouts a woman, clutching a pastel sparkly street sign that reads: Prosecco Time. A furious looking husband is trapped at the crossroads between Elf On The Shelf and the stacks of dancing reindeers.

‘I’m not standing here for a minute longer, Marion,’ he shouts — but Marion is nowhere to be seen.

Perhaps she is among the three-deep throng in the Rose Tinted section, bug-eyed with longing as she peruses feathered heart decorations, sequined velvet frogs, crowned swans with darling little beaks and plasticised robin nests, complete with sparkly eggs adorned with huge chunks of diamante. I pity the poor birdie who laid those babies. 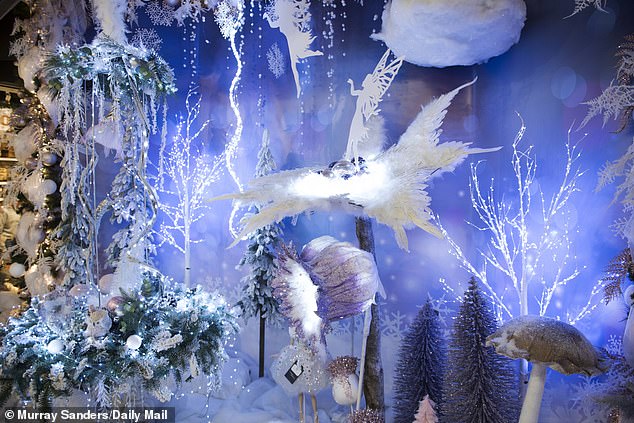 The Christmas Extravaganza can be viewed at Bents, a store near Glazebury which has been owned by the Bent family for 81 years

At first glance, such temples of festive excess seem to leave the spirit and message of Christmas far behind, but is that entirely true?

Once upon a time, Christmas decorations meant a simple pine or fir tree and a twirl of lights, with a fairy or a star at the top to represent the Angel Gabriel or the star of Bethlehem.

However, that’s their choice — and there is nothing worse than being sniffy about other people’s Christmas decorations. Some might swear by their freshly cut fir and tasteful vintage baubles, their red velvet wreaths and Jo Malone three-wick candles.

Good for them. But I like to think popular culture brightens the heart, too. And that each illuminated stag or plastic owl on Coleen’s tree expresses a depth of feeling just as profound.

Every illuminated penguin on a rooftop is still a spark against the encroaching dark; a sign that says we are still here and we are still going to celebrate Christmas and the birth of Jesus, come what may, in our own way.

And my goodness, it is all such fun. Bents has acres of fresh foliage and proper trees for the discerning shopper, but their Christmas grotto is the jewel in their plastic crown.

Twinkle, twinkle gigantic frosted star, who the hell do you think you are?

I don’t care, but that pink tinsel with the matching bow is mine, mine, mine.