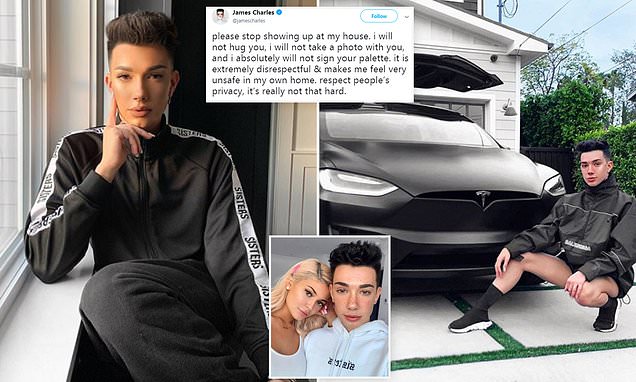 ‘I feel unsafe in my own home!’ Kylie Jenner’s make-up artist pleads with ‘disrespectful’ fans to STOP turning up at his house – but some say it’s his own fault for sharing his life online

A YouTube star who boasts over 11 million subscribers and is one of Kylie Jenner’s make-up artists has made an impassioned online plea to followers to stop turning up on his doorstep.

James Charles, 19, who lives in Los Angeles, took to Twitter to slam his lack of privacy, revealing that he felt unsafe in his own home.

The New York born-influencer frequently shares pictures of his plush California pad online, but revealed this weekend that he couldn’t focus on his work because of another uninvited visitor.

Taking to Twitter, the teenager told his 2.3 million followers: ‘Please stop showing up at my house. I will not hug you, I will not take a photo with you, and I absolutely will not sign your palette.

‘It is extremely disrespectful & makes me feel very unsafe in my own home. Respect people’s privacy, it’s really not that hard.’ 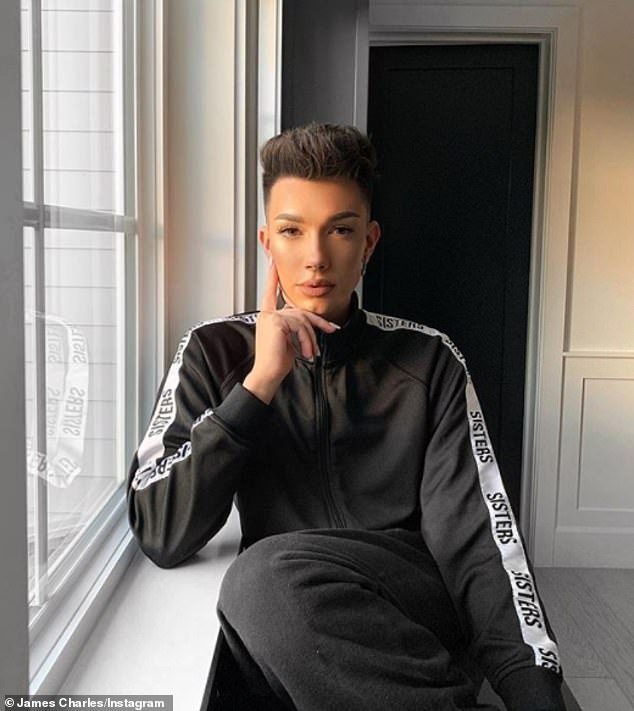 James Charles, 19, a viral make-up artist who lives in LA, took to Twitter late on Sunday night to slam his lack of privacy, revealing that he felt unsafe in his own home 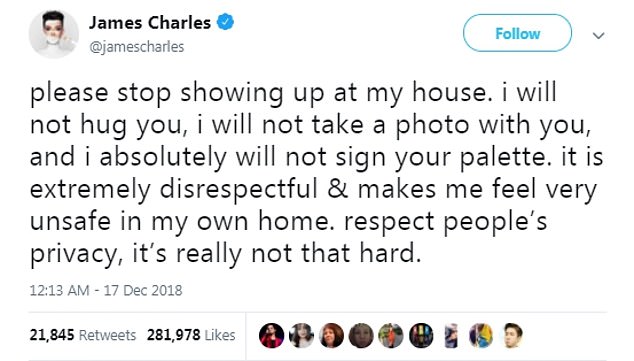 The YouTube star, who made history as the first ever male spokesperson for Covergirl, tweeted and asked people to stop ‘showing up at my house’, saying their behavior is ‘disrespectful’ 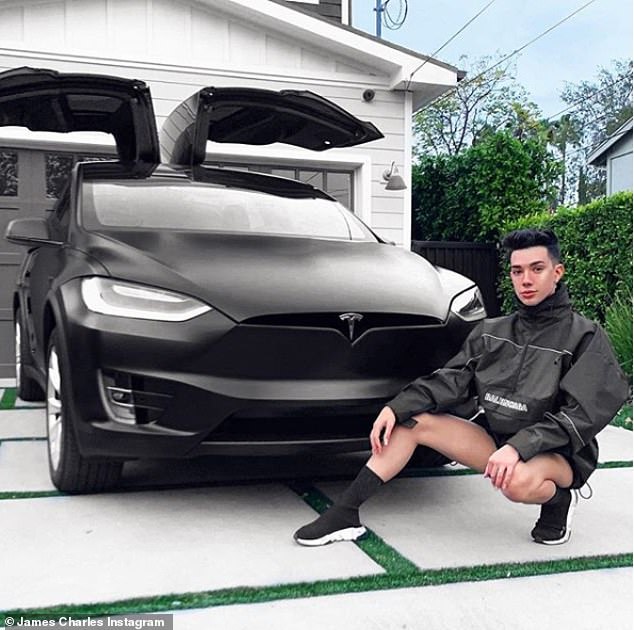 The New York born-influencer frequently shares pictures of his plush pad in California, but revealed this weekend that he couldn’t focus, hinting at another uninvited visitor 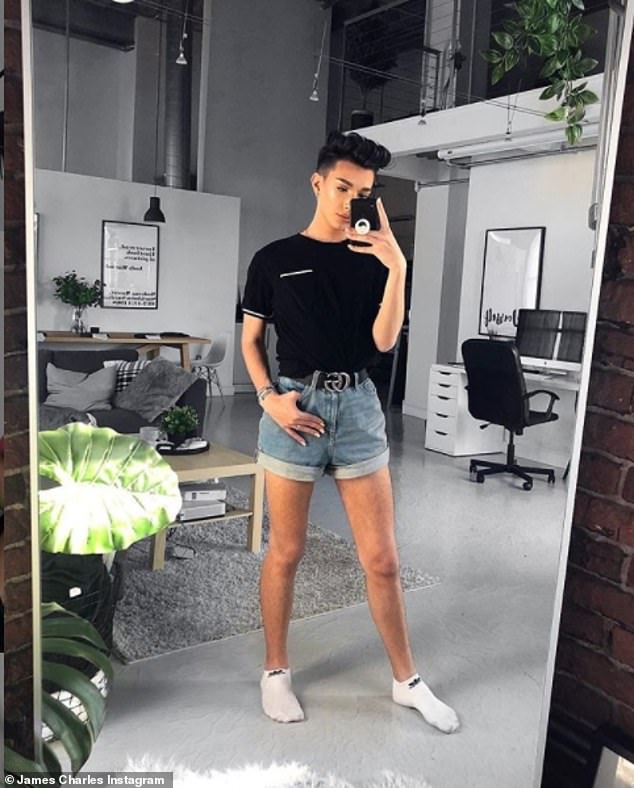 He often shares glimpses inside his glamorous home in LA and recently bought his first car, posing in front of his house on the driveway

He later admitted that his frustration and upset over his unwanted visitors was preventing him from working, tweeting: ‘I am so annoyed. I was supposed to be done filming hours ago and now I can’t even focus.’

Many fans reacted with horror, expressing their sympathy about his situation, with one replying: ‘It’s crazy how hard it is for people to understand something so simple.’

But while James – who made history as the first ever male spokesperson for beauty brand Covergirl – received a broadly sympathetic response from fans, others were less supportive with one telling him: ‘Don’t put your whole life on YouTube then.’

Agreeing, another added: ‘The fact that this even has to be said is beyond me. I feel weird going to my own neighbor’s house let alone someone I don’t even know.’

And addressing the fact that many of James’ fan base are children and teenagers, another encouraged him to call the police, adding: ‘It is unfathomable that those parents took their kids to come stalk you.

‘As a parent, I would never. I hope you called the cops.’

He later went back on Twitter to add: ‘I am so annoyed. I was supposed to be done filming hours ago and now I can’t even focus’ 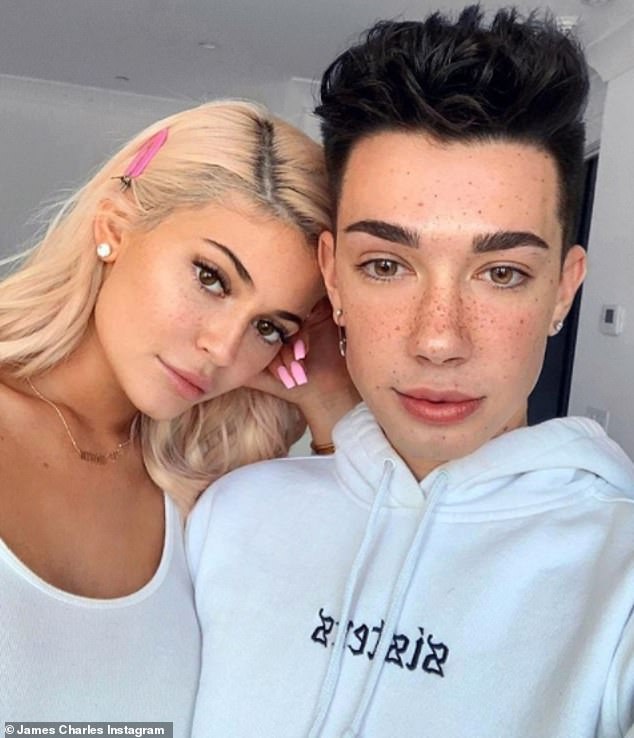 James, a YouTube star who boasts over 11 million subscribers and has done Kylie Jenner’s make-up, went online to plead with folllowers to stop turning up on his doorstep The beauty guru has also done Kylie Jenner’s make-up, and worked with her on Halloween looks 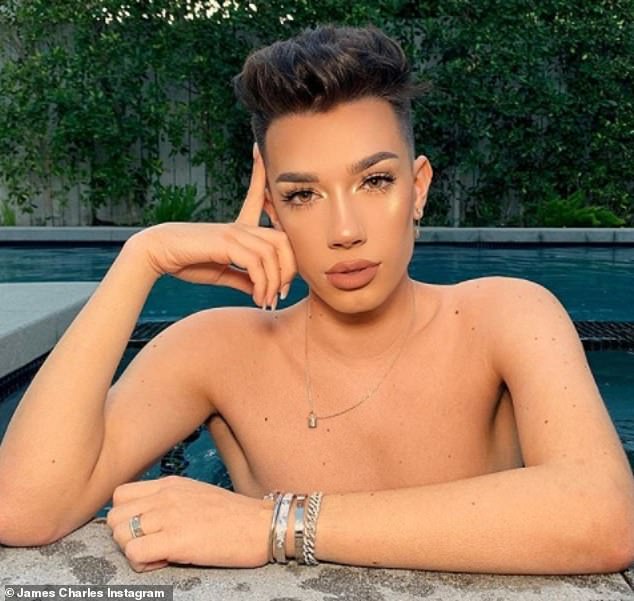 James, seen in his swimming pool, later went back on Twitter to add: ‘I am so annoyed. I was supposed to be done filming hours ago and now I can’t even focus’ 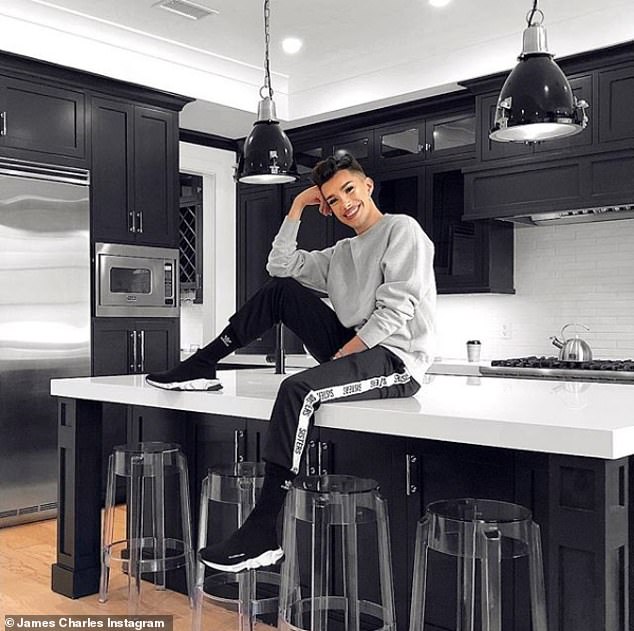 Despite being just 19, the make-up artist boasts an enviable lifestyle thanks to sponsorships earned due to his large online following, living in a stylishly decorated pad in California

But some argued that this type of behavior comes with the territory of being an online sensation.

One tweeted: ‘I totally agree with you but you shouldn’t have showed your house to millions. This what annoys me about YouTubers/celebrities. They show their house and then act surprised when people show up at their house.’

Arguing that his fans ‘made him’, another added: ‘Don’t put your whole life on Youtube then. I personally don’t know who you are but just remember without your fans you’d be a nobody.’

But others jumped to his defense, with one person writing: ‘Just because his life is on YouTube that allows randoms to show up to his private home and demand things?

‘That’s really sick. Real fans would respect him & not use the ‘we made you’ excuse because that’s really sh**** thinking anyway’.

Some of the fans within his 2.3 million-strong Twitter following reacted with horror, expressing their sympathy with the online star 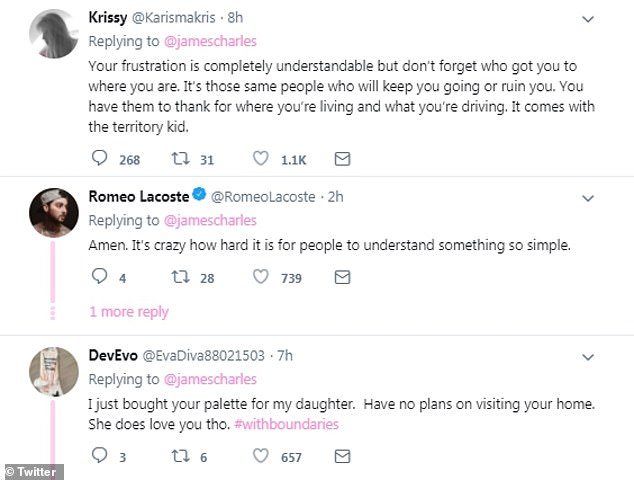 Agreeing, another remarked: ‘People who are saying ‘you chose this life’ are part of the problem. Taking pictures & signing palettes is obviously fine any other time. He’s meant to feel safe in the comfort of his own home, not feel like his life is possibly at risk.’

James first rocketed to fame back in 2016, when the then-17-year-old went viral after revealing that he’d had his high school senior yearbook photos retaken so that he could use better lighting and ensure that his highlighter ‘would be poppin’.

The beauty guru had already made a name for himself on YouTube and Instagram thanks to his flawless make-up tutorials and photos, and the viral fame only helped to sky rocket his public profile.

Soon after, he was named as the first ever Coverboy for beauty brand Covergirl, and has since gone on to collaborate on his own make-up range with Morphe.

James has also done reality star Kylie Jenner’s make-up, and even worked with her on special Halloween looks, turning her into 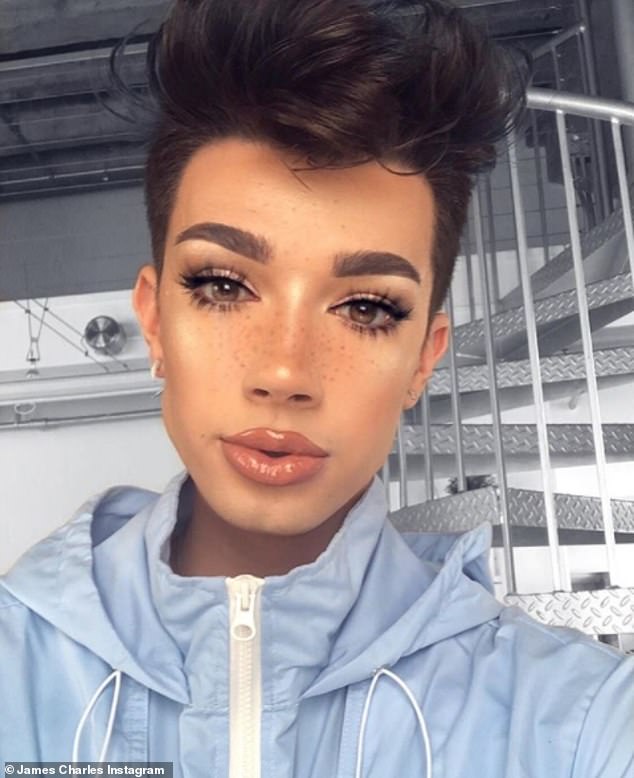 James rocketed to fame with his make-up tutorials, and as well as his work with Covergirl, he has also released a successful make-up collaboration with Morphe