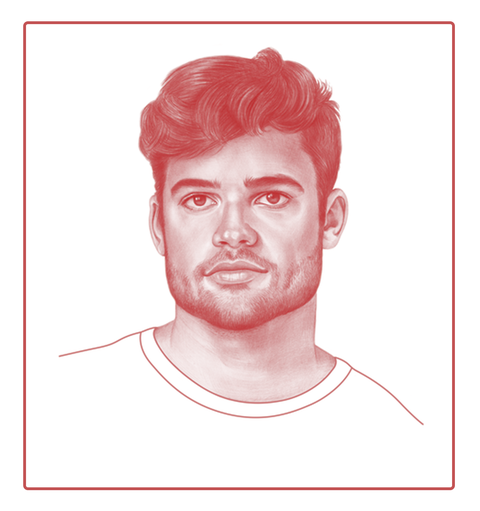 This story is part of The 2020 Project, a Men’s Health special project that explores the lives of 20 different 20-year-old men across America. To learn more about the others, go here.

Maybe you wouldn’t expect a teenager to be so nervous. After all, the world has changed, right? In the past decade, treatment of the LGBTQ community has improved. In 2011, the military repealed its “don’t ask, don’t tell” policy. In 2015, the Supreme Court legalized same-sex marriage, and this year it banned LGBTQ discrimination in the workplace. More than half of Gen Z doesn’t identify as heterosexual, according to a recent poll by YouGov.

Despite what seems like a lot of progress, however, Bain was still a Missouri high school football player about to come out. When he was finished speaking, the crowd gave him a standing ovation. “It was me finally letting so much weight off my shoulders that I had been carrying for so long,” he says.

In the fall of 2018, Bain matriculated at Indiana State University to play football, becoming one of the first openly gay Division I team athletes in history. Still, he was struggling emotionally on two fronts: He’d recently lost a childhood friend and he’d begun to further question his sexuality.

Bain says the death of his friend made him prioritize people and things that weren’t football: “I needed to take a step, get my feet settled, and figure out what it was exactly I wanted to do.”

So in 2019, he quit football. He transferred to North Carolina State University. In an Instagram post a month later, he decided to come out—again. “I have come to realize that my sexual orientation is truly a spectrum,” he wrote. Bain stated that he was pansexual, meaning a person who’s not attracted to just one gender.

Today he’s studying to become a sports psychologist. He wants to help other young athletes find clarity and maybe answer some of his own questions about his identity.

“I certainly miss football sometimes,” he says. “I feel more at peace and I definitely am happier than I was a year ago.”