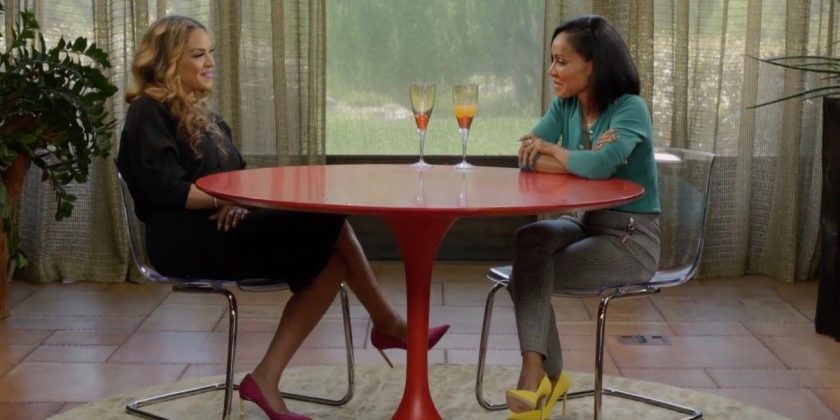 Jada Pinkett Smith has revealed that she had a 'sisterhood' bond with her husband Will Smith's ex-wife Sheree Zampino.

The actress, 50, who was defended by her husband Will at the Oscars on Sunday 27 March after presenter Chris Rock joked about her haircut, has described her relationship with Sheree as a 'beautiful sisterhood'.

Jada, who tied the knot with King Richard actor Will in 1997, sat down with Sheree for the premiere of her Red Table Talk Facebook series in which they spoke about their blended family.

Jada, who shares children Willow, 21, and Jaden, 23, asked Sheree about the 'most difficult point' in becoming a blended family.

Sheree said: "The week he [Will] told me he was introducing you to Trey and I said: 'No. I don't think that is a good idea.'

She continued: "So Trey comes home and I said: 'How did you like Miss Jada?' He said: 'I really liked her mommy.'"

The pair shared a heartwarming moment as Jada became emotional before Sheree added: "Thank you for loving my baby."

Meanwhile Jada revealed how she 'didn't understand divorce' and admitted that she 'should have fell back' when she started dating Will.

She said: "The beginning between us [Sheree and Jada] was rough but here is one thing I will say in hindsight because I did not understand marriage, I didn't understand divorce. I will say that I probably should have fell back.

"I would have fell back because I feel like when Will and I first started dating I had this thing in my mind, 'ok well you did that and that is done,' Jada added.

Sheree replied: "Oh you thought it was done?"

Jada said: "So that is where I was wrong. Now being a married woman and if Will and I were to get divorced now, my God. So when I think back about where I was. Some of my insensitivities, some of my inconsideration, just in relation to your guys unwinding a marriage."

It comes after Will shared a throwback snap to his Instagram 60.1million followers in November 2018 of his ex-wife Sheree and their son Trey Smith.