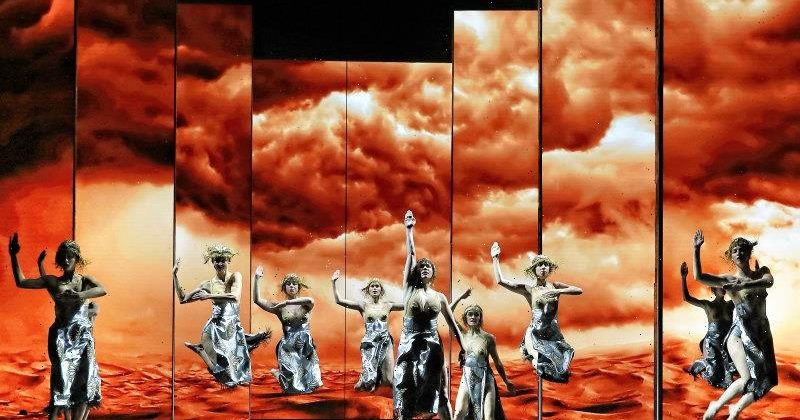 For all the blazing trumpets, gilded costumes, digital palaces and virtual temples, the most riveting dramatic moments in this revival of Davide Livermore’s 2018 production were created by three singers on a near empty stage as Leah Crocetto (Aida), Warwick Fyfe (her father Amonasro) and Stefano La Colla (Radames her lover) wrestle with Verdi’s timeless themes of civic duty and personal desire, filial ties and passionate love. 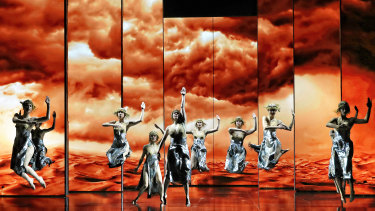 With set by design studio Gio Forma, digital content by D-Wok, and fantasy mythic costumes by Gianluca Falaschi, this is a production of striking images and imposing shapes shifted and linked between eight stage-high moveable panels that dwarf the performers. There are breathtaking cinematic effects though some ideas are occasionally overworked. The digital hyperactivity is supplemented by onstage dancers, superbly energetic and pugilistic.

In this context of fateful alienation, Crocetto’s voice as Aida taps into the human element in all its vulnerability with vivid colour and imploring power. Harnessing a flexible variety of tone and dynamic range, she maintained fidelity of pitch and radiance right up to the final leave-taking trio. Tenor Stefano La Colla sang Radames with a firm lyrical sound, heroic yet sufficiently light. His consistently firm sound matched a stage persona striving for honour in the face of triumph and tragedy.

Though in a smaller supporting role, Fyfe nevertheless conveyed the most musico-theatrical dynamism and energy in his portrayal of the father’s warlike vengeance.

As Aida’s fierce but ultimately forgiving rival, Amneris, Elena Gabouri grew in musical and dramatic force as the evening went on. Singing before a giant menacing panther, the early acts emphasised vocal hardness, and her most dramatically true and vocally impressive moments for her scene imploring Radames to defend himself and chose life, and in her redemptive moment of truth in the final trio. Daniel Sumegi sang Ramfis with fine-edged projection and haughty severity.

Though the drama turns on the personal, it is the chorus that conveys its epic monumentality and the Opera Australia Chorus had superbly balanced power in the great chorus of Act I and the triumphal march of Act II, Scene II. Littlemore forsakes the sense of progressive gathering in the triumphal march, breaking it up into several scenes with ballets, videos and superb trumpet choirs in the gallery.

Conductor Lorenzo Passerini adopted unrushed tempos at the start, drawing out magisterial moments of drama even at the risk of letting the tension slacken. With the Joan Sutherland Theatre’s new electronically assisted acoustic, the balance in full ensemble numbers was as loud as you would want it.

Littlemore’s use of screens differs from that of Peter Greenaway in Louis Andriessen’s opera Writing to Vermeer (Adelaide Festival 2000) and Sydney Theatre Company’s Kip William in The Picture of Dorian Gray, both of whom use the onstage screens to create windows to other worlds and a virtual counterpoint to the real. Littlemore’s screens are like traditional theatrical flats brought to digital life, intensifying the spectacle and awe with which Aida, of all operas, has become inextricably linked.