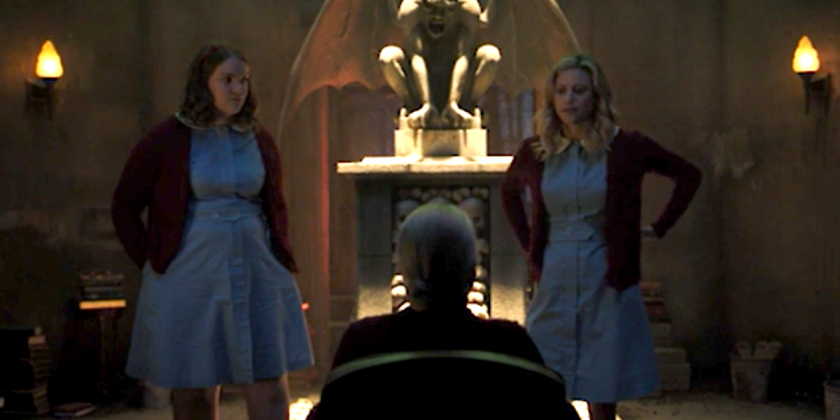 Riverdale did not hold back at all in its midseason finale on Wednesday night, and we finally got some answers about the Gargoyle King at long last. The identity of the town’s new resident killer is still a mystery, but the new episode did clear a lot of stuff up, and it might have revealed an important element about the person who is under that mask. After watching the episode, fans might be wondering is the Gargoyle King a Sisters of Quiet Mercy patient, because now we know for sure that the killer is related to the devious shelter somehow.

Spoiler alert: This post contains plot details from Riverdale Season 3 Episode 8, "Outbreak." The midseason finale finally tied together some of the big story threads of the recent few episodes — explaining how the Sisters of Quiet Mercy, the Gargoyle King, and Hiram Lodge’s evil schemes are all connected to one another. After coming down from her forced Fizzle Rocks high, Betty is able to detox Ethel by locking her in the Gargoyle King’s chamber and Ethel finally realized that the Gargoyle King was just a hallucination caused by the Fizzle Rocks.

With Ethel now on her side, Betty is able to kidnap Sister Woodhouse and tie her up in the Gargoyle King’s chamber, where she and Ethel question her about what the hell is going on at the Sisters of Quiet Mercy. Sister Woodhouse reveals that the Gryphons and Gargoyles game was actually created at the Sisters of Quiet Mercy. The nuns have always thrown misbehaving patients in that basement room, and soon they noticed that the patients developed an intense fear of the gargoyle statue in the punishment room. Because that fear of this so-called Gargoyle King kept the patients complacent, the nuns created a game around the creature. 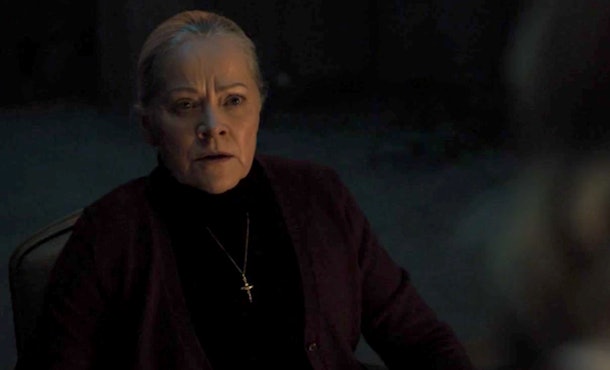 That means there is an actual Gargoyle King running around, and the fact that Gryphons and Gargoyles began at the Sisters of Quiet Mercy suggests that he or she may be a former inhabitant of the shelter. Sister Woodhouse mentions that the nuns never wanted the game to leave the walls of Sisters of Quiet Mercy, but somehow it did get out. Only a Quiet Mercy patient would have known about the game after it was invented. That narrows our list of suspects down to only a few characters we know, or to a possible new character we haven’t met yet.

Joseph Conway, Alice Cooper, Charles Smith, Polly Cooper, Cheryl Blossom, and Penelope Blossom are all the inhabitants of SoQM that we know about. We can almost definitely cross Cheryl and Alice off the suspect list, and we saw Joseph Conway (A.K.A. Mr. Svenson) die last season. And although we could make convincing arguments for Polly and Charles being the Gargoyle King thanks to Polly’s relationship with The Farm and Charles’ overall mystery, they would not have been alive when Alice first saw the Gargoyle King back in the ’90s. That leaves us with only Penelope Blossom as a prime suspect.

Alice revealed that Penelope grew up an orphan at the Sisters of Quiet Mercy before the Blossoms adopted her, and we also know she is definitely capable of some majorly evil things. Plus, she’s hardcore Team Hiram, and the end of the finale showed Hiram toasting to the Gargoyle King. We better keep our eyes on Penelope when Season 3 of Riverdale returns in January.