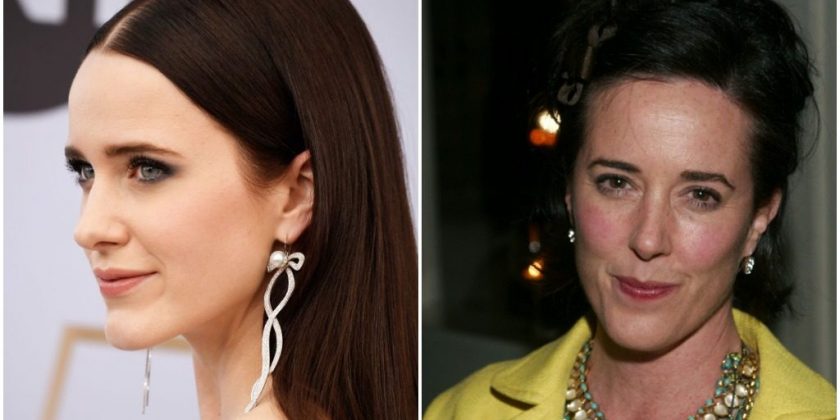 Rachel Brosnahan has a new role. The award-winning star of The Marvelous Mrs. Maisel is the new face of the late Kate Spade’s label Frances Valentine. But the modeling gig is more than just a simple job for Brosnahan, who has a close connection to the designer.

Spade – who died by suicide in June 2018 – was Brosnahan’s aunt. The actress says that the new spring ad campaign is a way to honor the memory of her relative.

“When you lose someone you love, you search for boundless ways to keep their memory alive,” Brosnahan told People magazine. “This felt like a way to do that through her beautiful creations and an opportunity to share them with all of those who her work meant so much to.”

In the campaign, Brosnahan’s resemblance to her aunt is clear. They styling highlights the similarities, with Brosnahan’s hair done up in same messy bun her aunt often wore and the vintage-looking dresses and shirts with peter-pan collars reminiscent of the styles the designer favored.

Spade and her husband, Andy, founded Frances Valentine in 2016. (Spade had left the eponymous company she founded in 2006.) The label was named after their daughter, Frances Beatrix, who was born in 2005.

The 28-year-old Brosnahan’s father was Spade’s brother. The two were close, and the actress shared a loving tribute to her aunt on Instagram after her death, writing that Spade, “had a light that words can’t capture but touched everyone she came into contact with. She was exceedingly kind, beautifully sensitive, insanely talented, funny as heck and one of the most generous people I have ever known. She was effervescent.”

So very happy to share our Spring 19 campaign with the truly marvelous Rachel Brosnahan ? See the full look book – link in bio.

So very happy to share our Spring 19 campaign with the truly marvelous Rachel Brosnahan ? See the full look book – link in bio.

So very happy to share our Spring 19 campaign with the truly marvelous Rachel Brosnahan See the full look book – link in bio.

The new Frances Valentine collection, which includes bags, shoes, and jewelry, is full of the bright colors and vintage-inspired style that was Spade’s signature. Brosnahan told E! News that the handbags were inspired by Spade’s mother.

“The bags are just stunning,” she said. “They’re bright and colorful and have beautiful shapes and I know Kate had always talked about being inspired by my grandmother June, her mother, ripping things straight out of her closet, and I feel like that spirit still lives on as well. So, it’s really lovely to see those special pieces of our family reflected through this collection and the ones before.”

Many of the pieces would not look out of place on the midcentury housewife that Brosnahan plays on The Marvelous Mrs. Maisel, like woven rattan handbags, loafers, kitten heels, and chunky jewelry. One item – a small structured patent leather handbag – was even dubbed the “mini Midge.”

While Brosnahan says she likes the retro looks she dons for the show, her own style is a bit more casual. “I appreciate Midge’s style and have always had a love for vintage fashion, but I love comfort more,” she said. We both love bold colors but that’s where the parallels end. I’ll leave the corsets and petticoats to Midge!”