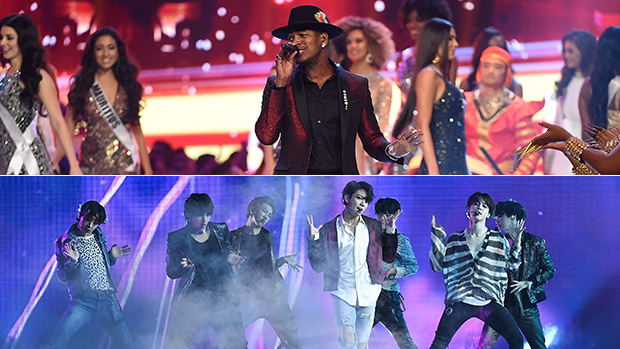 With K-Pop sensations BTS being the hottest act in music these days, plenty of artists want to work with them. Ne-Yo tells us EXCLUSIVELY how he’s up for a collaboration.

As Korean boy band BTS has reached global domination, a ton of Western artists want to work with the septet. Among those is Ne-Yo, who tells HollywoodLife.com EXCLUSIVELY how he’s totally up for a collab. The 39-year-old is famous for his many collaborations — from singing to songwriting and more — and he tells us that he thinks that BTS is “next level.” ” Oh I would love to! I would love to! In order to maintain my standing in music I got to embrace the new generation,” Ne-Yo explains about a collab with BTS.

“I have never understood the concept of a person that didn’t. It’s like, ‘Well I will do what I do and they do what they do!’ No, you did what you did and they’re the next level of what you did and you gotta… You gotta be  a part of that if you want to be a part of the music industry!” He continues. “So yeah, shout out to BTS and the BTS’s of the world and artists like Her who is really making major moves in R&B, in the R&B space. Everybody that is doing music that means quality as opposed to trend… You know that is what I look out for!”

Ne-Yo wears many hats in the music industry, as in addition to his own singing career he’s also a talented songwriter and record producer…as well as an actor and dancer. He’s written such mega hits as Beyonce‘s “irreplaceable,” which spent 10 weeks at the number one position on Billboard’s Hot 100 chart in 2006, Rihanna‘s hits “Take a Bow,” “Unfaithful” and “Hate That I Love You,” and Jennifer Hudson‘s smash “Spotlight.” He could write a tune for BTS, produce a song for them or even perform with the band. Even though they sing mostly in Korean, Western artists like Nicki Minaj and others have lent bars to their tunes. After two decades of success in the music industry, Ne-Yo knows what he’s doing and we can’t wait to see what a collab with BTS would sound like.