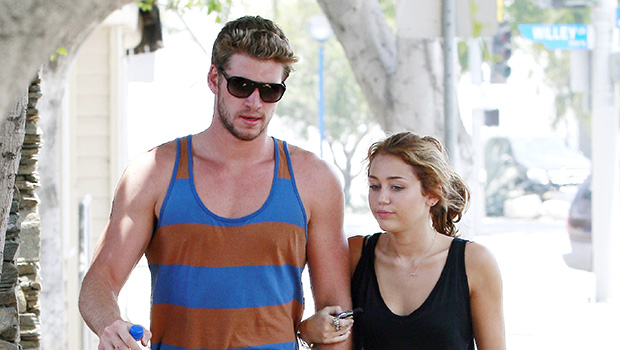 Miley Cyrus shocked everyone when she reportedly married longtime boyfriend Liam Hemsworth in a secret ceremony on Dec. 23 and now her friends think the couple is expecting a child together.

Miley Cyrus, 26, and longtime boyfriend Liam Hemsworth, 28, appeared to be married in a secret ceremony at her Nashville home on Dec. 23 and since close friends weren’t invited to be a part of the shocking festivities, there’s speculation that a baby may be the reason for the spontaneous wedding. “Close friends, who were left out of Miley’s party, are struggling to make sense of a possible wedding with Liam and many suspect she may be pregnant,” a source close to Miley EXCLUSIVELY told HollywoodLife. “Those close to her are freaking out over what appears to be a sudden, unannounced wedding. Miley has been out of reach and not returning calls and texts leaving many close to her wondering what’s really going on.”

In addition to the spontaneity of what looked like a wedding, another reason Miley’s friends think she may have a bun in the oven is because of how she previously expressed interest in only marrying when she was ready to have a family. “Friends who worked with her on The Voice suspect that Miley might be pregnant,” the source continued. “She always talked to crew on the show about how she wanted to have a small wedding, maybe elope with a few close friends and family. She also talked a lot about how she felt that marriage was something she wanted to do when she was ready for a family. So those who did not make the tiny wedding invite list suspect that Miley may already be pregnant or about to be.”

If Miley is indeed pregnant, it seems like the natural next step for her and the Aussie hunk. The couple first met in 2009 on the set of their film The Last Song and got close right away. They made their debut as a couple on the red carpet of an Oscars event in March 2010 and seemed to be inseparable. After dating for a couple of years, they announced their engagement in June 2012 but by Sept. 2013, the engagement was called off. Miley went on to date and break up with Patrick Schwarzenegger before reconciling with Liam in Jan. 2016. Since then, they’ve gone through many ups and downs together, including the devastating Woolsey fires that sadly burned their home to the ground.

We can’t wait to see where Miley and Liam’s journey of love leads from here. These two are truly an inspiration to their fans when it comes to maintaining and appreciating a relationship and it seems things are only getting better for the loving duo!