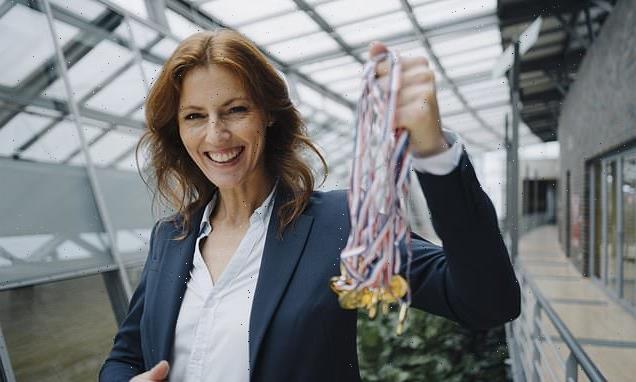 Is it ‘bragging’ to celebrate your achievements? Women claim that they’re always branded ‘egotistical’ while men are ‘praised’

A woman has started a debate over whether you can ever celebrate your achievements without seeming boastful after noticing that women always seem to be branded ‘aggressive’ or accused of boasting.

A US Reddit user posted her gripe on the site, saying: ‘Last week, I saw a video of a woman showing off her medals and the comments were just full of salty people trying to belittle her and in general just saying mean things about her ‘bragging’ and such.

‘But in the same day, I saw a similar video of a guy showing off his awards and everyone is praising him? What’s the deal here?’

‘I just feel like people (mostly women) aren’t allowed to mention their achievements without being seen as egotistical.’ 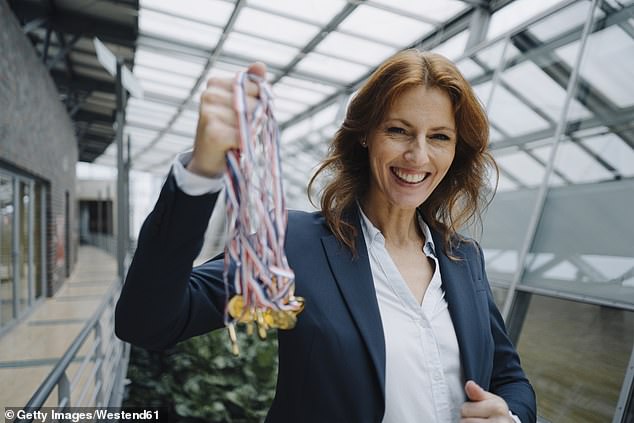 A US Reddit user posted to the site with her gripe, saying that a woman getting medals received ‘salty’ comments (stock image)

People flocked to agree, saying that words like ‘aggressive’ are often used when speaking about confident women, while others revealed they had been told to ‘calm down.

Another even claimed that men were ‘hypocrites’ when dealing with a confident woman.

One person commented: ‘Yeah I get ‘calm down’ or called ‘aggressive’ or they’ll go ‘woah!’ if I speak my mind.

‘I’m a confident woman too and won’t keep my mouth shut when I know something needs to be said, but a lot of men get uncomfortable and can’t handle it. Ironically a man who was yelling at me will do this if I SPEAK back firmly. Hypocrites.’

Another Reddit user said:’Yeah, I’ve received all of those responses too. It leaves me baffled. How can they not see the hypocrisy?

‘I too have spoken with confidence to men that have yelled at me, and they look at me like I’ve just yelled 10 times louder, when, in fact, I was as calm as I would be in a normal conversation.

Another added: ‘I’m looking forward to calling men out on their strange illogical arrogance toward women. I usually don’t step into that conversation.

People flocked to agree, saying they had endured similar experiences and called men out for being ‘hypocrites’

‘I just stick with being confident in myself, just as men feel they can be – but I’m ready to cause a bit of upheaval and ruckus to encourage change in those men who are unaware of their sexism.’

Commenter brought up US football star Megan Rapinoe, citing her world cup celebrations, and pointing out that she was ‘criticised’ for being proud of her accomplishments as a female.

They also claimed that people wouldn’t ‘call Messi out’ for the same behavior.

A Redditor said: ‘I’m with you. I’ve been engaging in more of these conversations lately too because frankly, I’m sick of being the one who always practices self control and is treated like I’m not anyways.

‘Just be prepared, these types double down and often the conversation doesn’t go anywhere. It does feel better than just taking it though.’

Another chimed in with:’Do you remember the criticism Megan Rapinoe caught after having WON THE EFFING WORLD CUP because she was celebrating and doing a pose to show that she was proud of her achievements?

‘Like, who would criticise…I dunno, Messi for that? Oh, that’s right, no one, bc being a conquering badass is a man thing, not a woman thing.’

Others suggested it may be because men are ‘intimidated’ by strong women, and try to fit them in to stereotypes.

‘Because men are weak and easily intimidated both by other men and strong women.’

Another chimed in with: ‘They either try to humble her, or they sexualize her.’

Boy,10, won’t get Christmas presents for six years after uncle thinks he needs to pay for stealing from grandmother

Forums on Reddit reveal men are turning to chemical castration to suppress their urges.