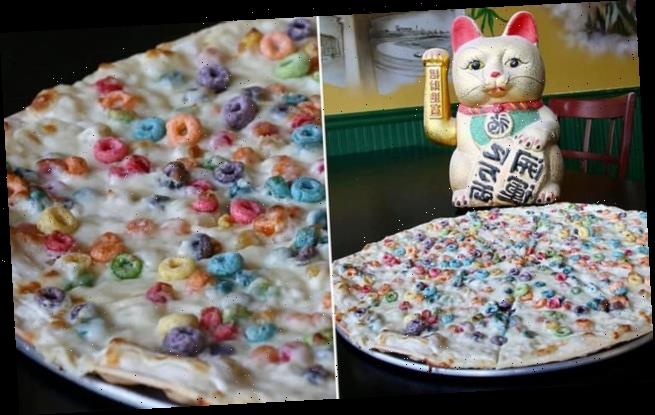 An Iowa pizzeria is at the center of a massive online controversy after social media users got wind of its Froot Loops Pizza.

Fong’s Pizza, a restaurant that ‘combines flavors & inspiration from the Far East & the West,’ has permanently added the unusual novelty pizza to its breakfast menu in Des Moines.

It’s made with a sweet cream cheese sauce base, mozzarella cheese, actual Froot loops, and drizzles of Greek yogurt and condensed milk — ingredients that many Twitter users say should never, ever be on a pizza. 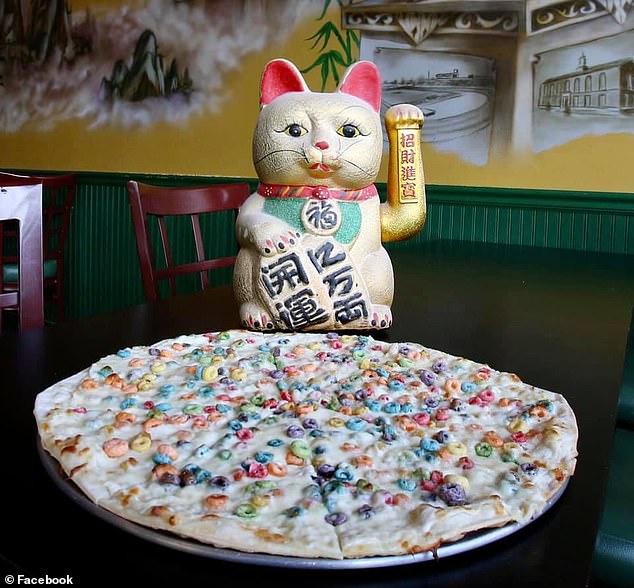 Inventive! Fong’s Pizza in Iowa is going viral for its Froot Loops Pizza 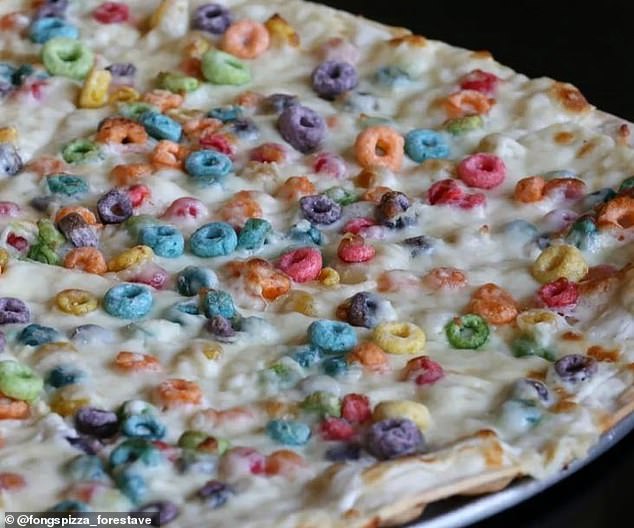 Sweet: It’s made with a sweet cream cheese sauce based, mozzarella cheese, actual Froot loops, and drizzles of Greek yogurt and condensed milk 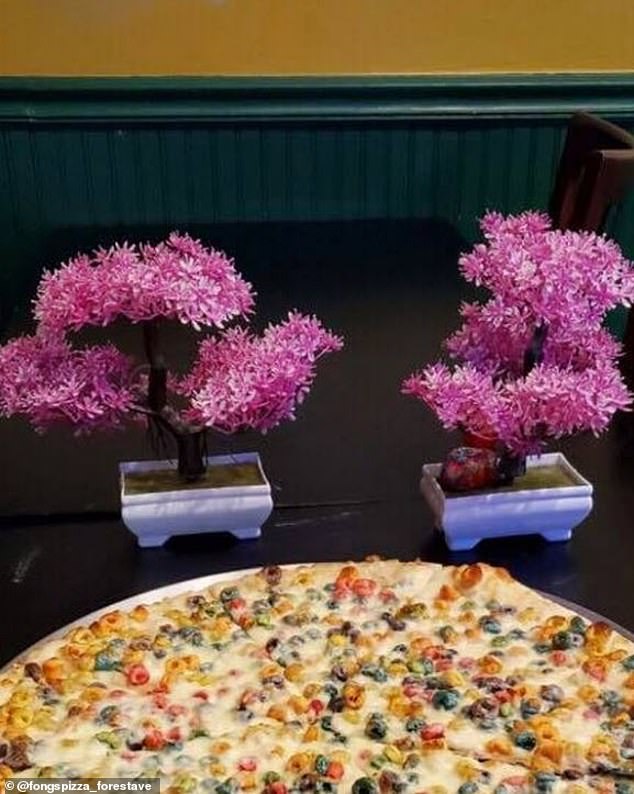 ‘Making pizzas that are outside the box has always been a staple of Fong’s,’ owner Gwen Page said

‘Making pizzas that are outside the box has always been a staple of Fong’s,’ owner Gwen Page told the Des Moines Register. ‘Now we’re trying things out for breakfast pizzas.’

The dish actually made its debut at another of the restaurant’s locations five or six years ago, but only recently became a permanent offering at its Forest Avenue location.

‘I guess this — in its funny little quirky way because that’s Fong’s to a T — is a way of spreading kindness,’Page told Today.

‘You look at this pizza and it’s a rainbow. It should bring a smile to your face, even in the form of, “Wow, that’s crazy, I gotta try that” or “Wow, those guys are crazy! I can’t believe they’re doing that.”‘

‘We wanted to provide an option that we thought would be fun for children because of the suburban market,’ she added. ‘But also we love doing things that are just off-the-wall. Like what can we do to give people that truly unique experience? That’s what we strive for at Fong’s.’

But while locals may love it enough to keep it on the menu, some social media users are horrified.

‘Hard pass for me, too — love #fruitloops, love #pizza, but some things are best savored separately!’ wrote one.

‘Ok, personally, I’m drawing the line with cereal & yogurt in pizza,’ said another, while a third simply wrote: ‘Iowa, man, I don’t know.’ 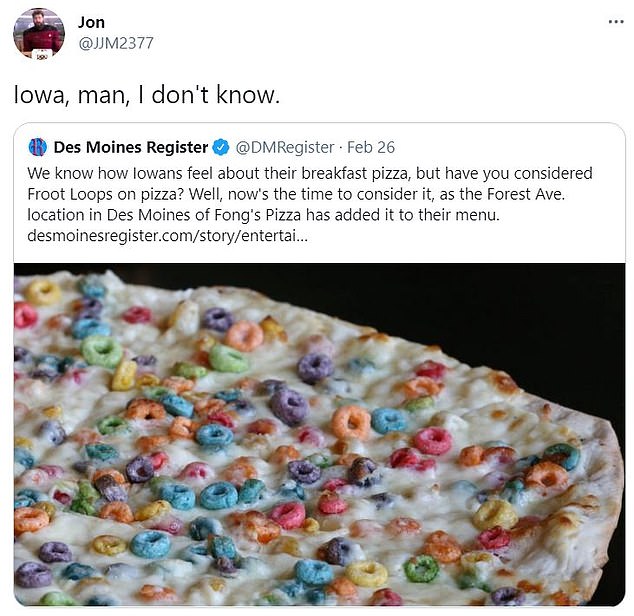 Oh no! But while locals may love it enough to keep it on the menu, some social media users are horrified

‘Terrible pizza topping ideas have to be one of the plagues in the bible,’ tweeted one more, while yet another quipped, ‘This might be so offensive, the selection committee refuses to put Iowa into the NCAA Tournament this year.’

Grocery store brand DiGiorno said that the Froot Loop pie is not pizza, tweeting: ‘Please do not disrespect the word pizza like this.’

‘Clearly giving Iowa as much influence over our presidential elections as it had was giving it too much responsibility,’ another Twitter user wrote.

‘I am opposed to capital punishment generally but I can see now why there would be exceptions,’ said one more. 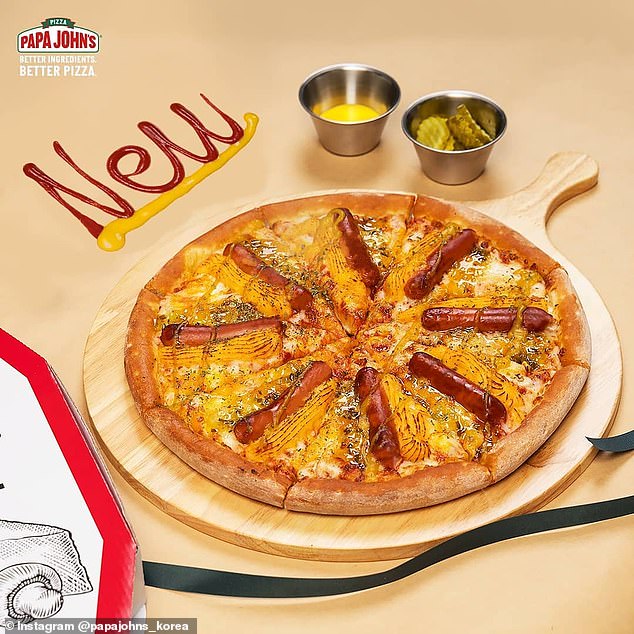 Controversial: In 2019, Papa John’s in South Korea debuted an ‘American Hot Dog Pizza’ made with eight whole hot dogs, with one fitting on every slice 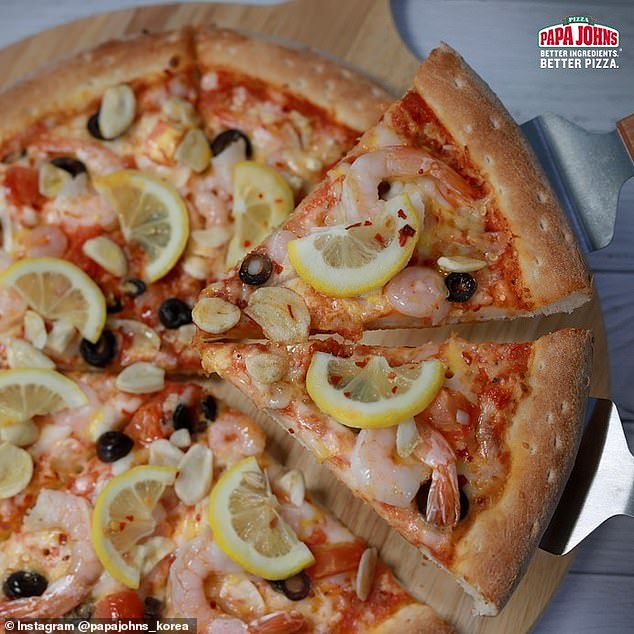 Oh no… South Korean Papa John’s restaurants have sold some other strange toppings in the past, including a pizza with shrimp and lemon on top 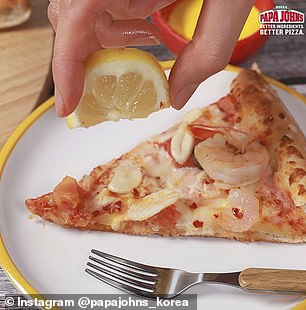 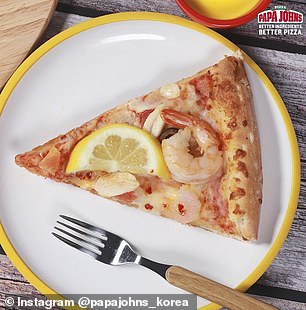 Pizzerias around the world have been concocting some questionable versions of the beloved dish for years.

Made with eight whole hot dogs — with one fitting on every slice — the pizza is also topped with chili salsa sauce, mozzarella cheese, cheddar potato mousseline, onions, dijon mustard sauce, pickle relish, and parsley, according to Chew Boom.

While it may have been a hit in Asia, English-speaking commenters were aghast by the creation, calling it ‘gross’ and an ‘abomination.’

‘Most disgusting thing I have ever seen,’ wrote one, while another chimed in: ‘No, no, no. Don’t call that thing American.’

South Korean Papa John’s restaurants have sold some other strange toppings in the past, including a pizza with shrimp and lemon on top. 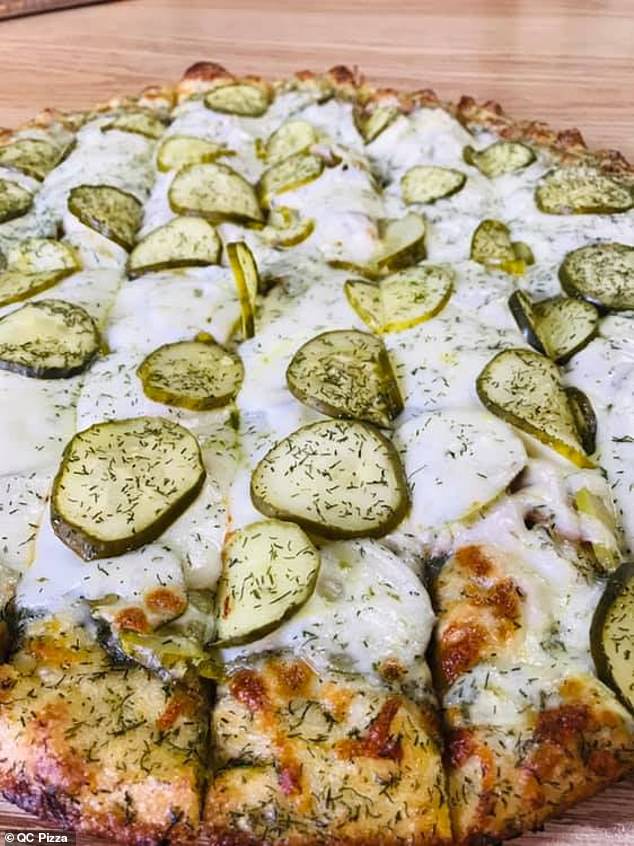 Yes or no? QC Pizza in Mahtomedi, Minnesota sells a dish called the Big Dill Pizza 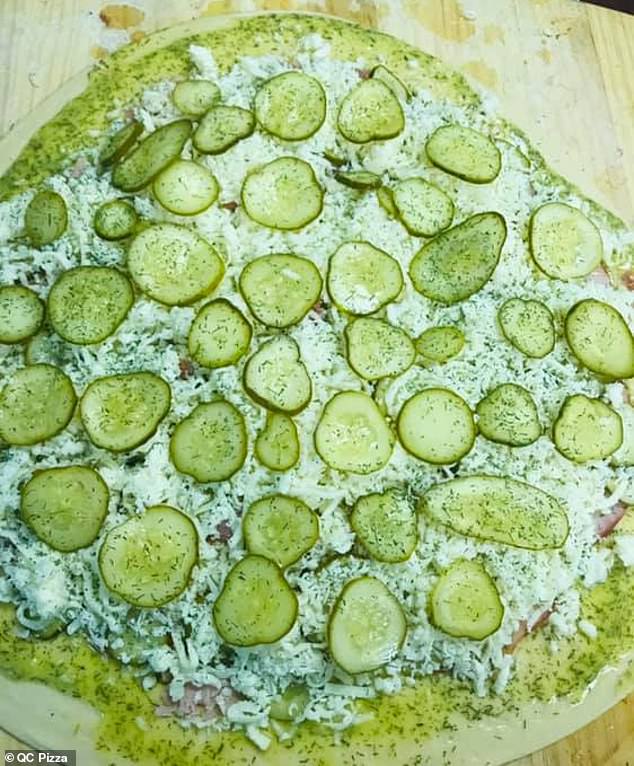 Ingredients: It is made with dill garlic sauce, 48-hour smoked Canadian bacon, pickles, and lots of cheese 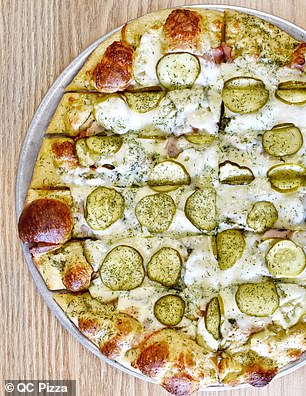 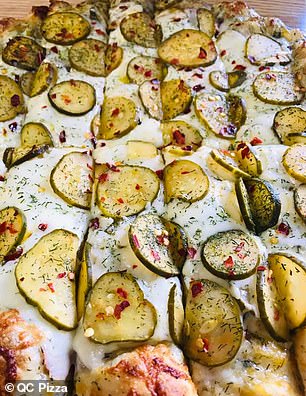 Odd: Unlike traditional pizza, there’s no red sauce — which is likely a good thing, considering the pickles

Meanwhile, QC Pizza in Mahtomedi, Minnesota sells a dish called the Big Dill Pizza, which is made with dill garlic sauce, 48-hour smoked Canadian bacon, pickles, and lots of cheese.

The pickle pizza certainly has its enthusiastic fans, but to tomato sauce and mozzarella traditionalists, the unexpected topping is something tantamount to blasphemy.

‘It is becoming more and more clear to me that we need a national conversation around what we call a pizza. This is not a pizza,’ wrote one Twitter user.

‘If you put pickles on your pizza get the F*** out of my face,’ wrote another, while a third said: ‘Pickle Pizza prob the nastiest thing I’ve ever witnessed.’

QC Pizza has some other unconventional pies, including taco pizza (made with sausage, taco-seasoned cheddar, onions, lettuce, tomato and Doritos) and the ‘sour pig’ pizza (made with Canadian bacon, sauerkraut, red sauce, and mozzarella). 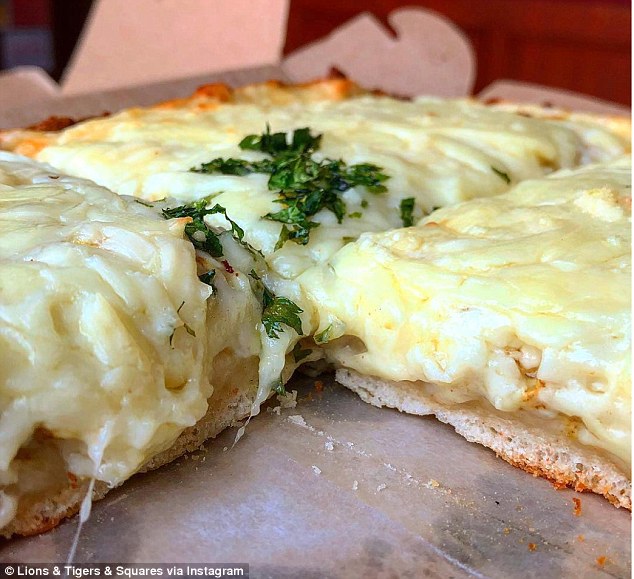 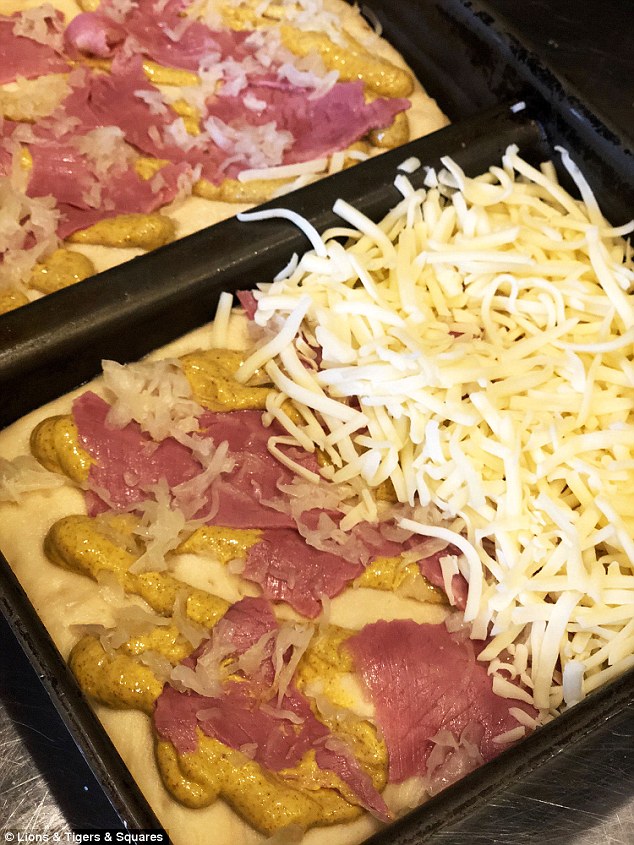 Saucy: Instead of tomato sauce, the dough is topped with mustard before it goes in the oven 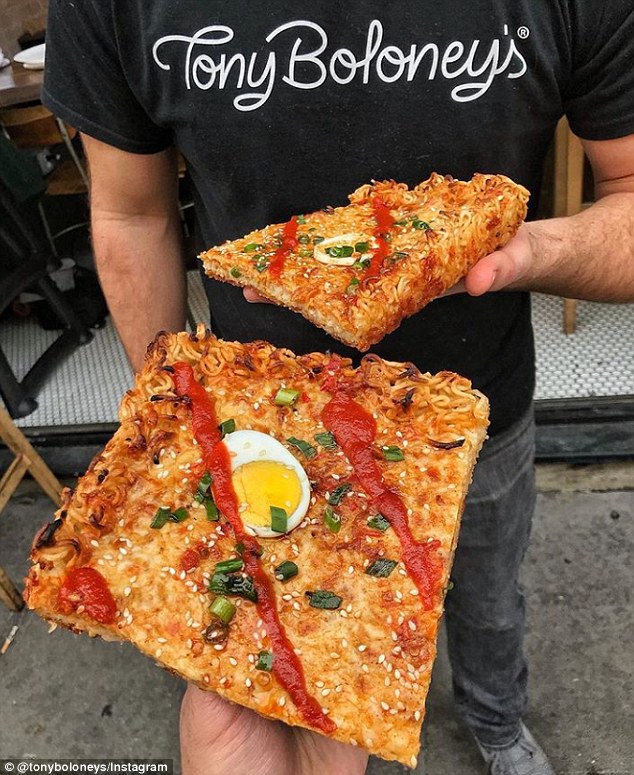 In 2018, Lions and Tigers and Squares in New York City sparked a debate with its Detroit-style pies, which were made with a layer of mustard instead of tomato sauce.

‘In Sicily, this is punishable by stoning,’ wrote one critic at the time.

‘This makes me want to gag,’ wrote another, while a third added: ‘This is why the aliens won’t visit us.’

Months before, Tony Boloney’s, which has locations in Hoboken and Atlantic City, New Jersey, unveiled its Devour Ramen Pizza.

Owner Mike Hauke, 37, created it in collaboration with Instagram food couple Devour Power, made up of Greg Remmey and Rebecca Leigh West-Remmey. 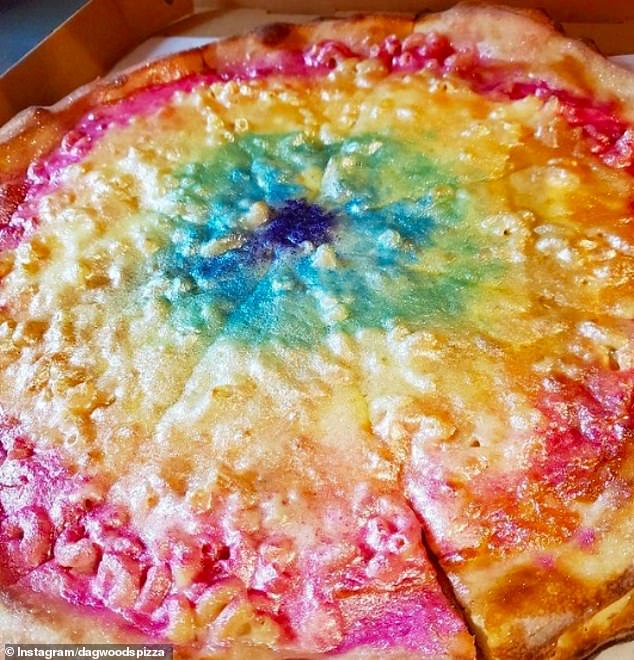 The ‘Magical AF’ pizza is just a regular cheese-and-tomato-sauce pie, except the mozzarella on top is saturated in edible glitter sprinkled on in a rainbow design.

The pie has pink, orange, yellow, green, blue, and purple glitter starting at the crust and circling in to the middle.

While some social media commenters were skeptical that a pizza covered in glitter could taste good, those who tried it and posted pictures online promised it’s just like a regular cheese pizza.