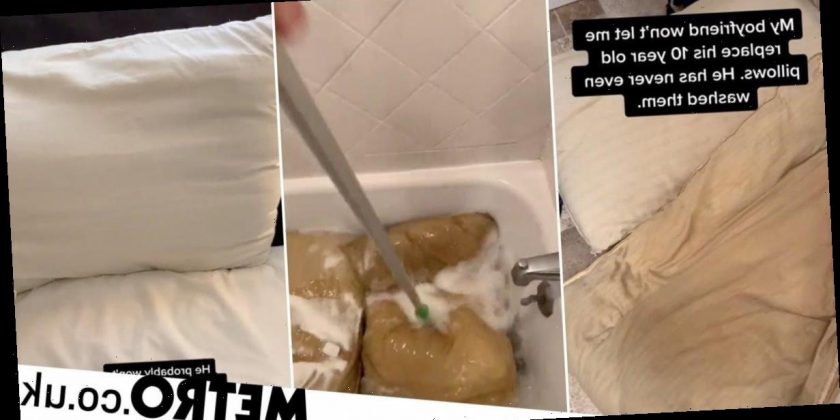 22% of Brits don’t wash their bed sheets every week and the same amount believe you can go up to five weeks without them being considered dirty.

But a recent TikTok video had shocked the world – including these washing machine dodgers.

A woman filmed herself washing her boyfriend’s stained pillows after 10 years – and social media users are horrified at the state of them.

In the viral video, the TikToker claims her boyfriend refused to replace his pillows and had never washed them once in an entire decade.

She’s seen putting the bedding in the bath with a (frankly over-the-top) concoction of borax, bleach, and dishwasher tablets.

After getting bored of prodding them they go in the machine and do end up coming out very clean-looking – especially given they started the process a stained brown colour.

The video has since gone viral on TikTok, gaining over 1.7 million views and leaving users in bafflement at the state of the pillows before they were washed.

One said: ‘With that alone, I would replace the boyfriend. Hygiene is everything.’

Another added: ’10 years of sweat, dead skin, dirt, oil and bacteria,’ while one more wrote: ‘They are meant to be replaced every two years… they come with expiry dates on them…’

As a general rule you should replace your pillows once every two years at least. This is for hygiene purposes as well as to ensure it’s still supporting your neck properly.

Duvets can potentially last longer (up to 10 years depending on the quality) but are also much easier to wash – something you should be doing every two to three months.

Check the label on yours to see if it can be washed in the machine. Or, follow this one mum’s tip and see all the grime come out in the bath.