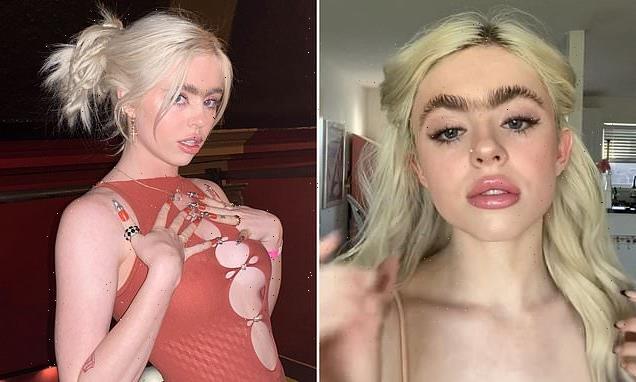 Influencer, 21, branded a ‘caveman’ because of her monobrow hits back at trolls and insist she’s more confident than ever after giving up plucking

An instagram model has claimed that she feels more confident than ever since growing a thick unibrow.

Kenah Jonel has shrugged off trolls who branded her a ‘caveman.’

The 21-year-old, from Austin Texas, has always sported bushy eyebrows but had them plucked from the age of 10 until she decided to let them grow out when she turned 16. 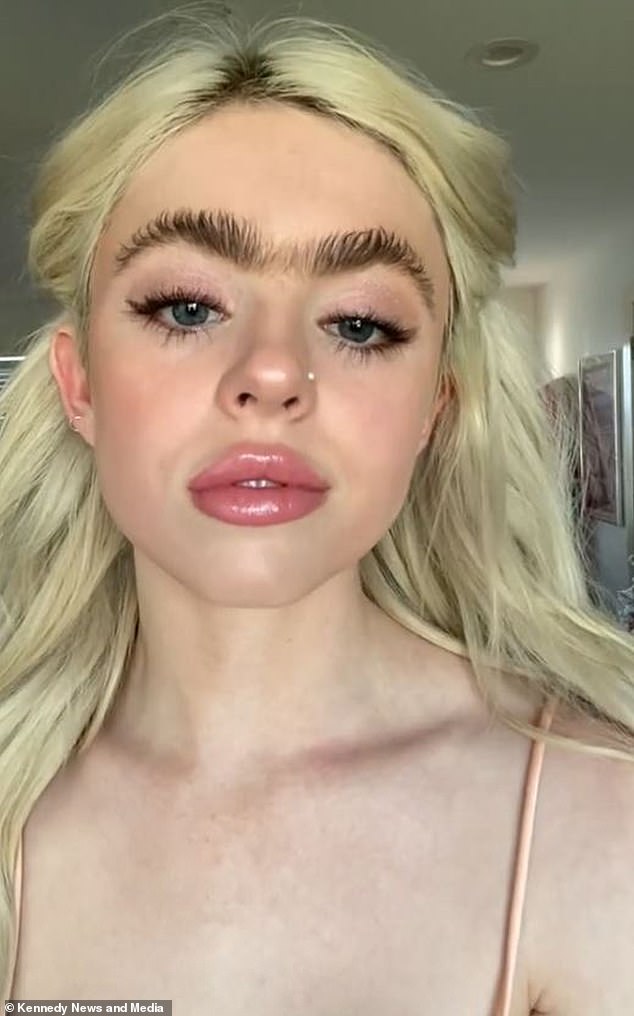 Kenah Jonel (pictured) has always been showered with compliments for her bushy brows. The model, 21, from Texas, stopped plucking her eyebrows when she turned 16

Kenah has always been showered with compliments over her bold brows, with admirers telling her they are ‘perfect,’ ‘incredible’ and her her best feature.

But since the social media influencer started using TikTok they’ve been the target for hateful comments, predominantly from men, who’ve called her a ‘monkey’ and ‘caveman’ and branding her unibrow a ‘caterpillar’.

Despite this, the fashion lover claims she feels most confident with her unibrow and that kinder users have remarked that she’s inspired them to ‘be themselves’ and also ditch the tweezers. 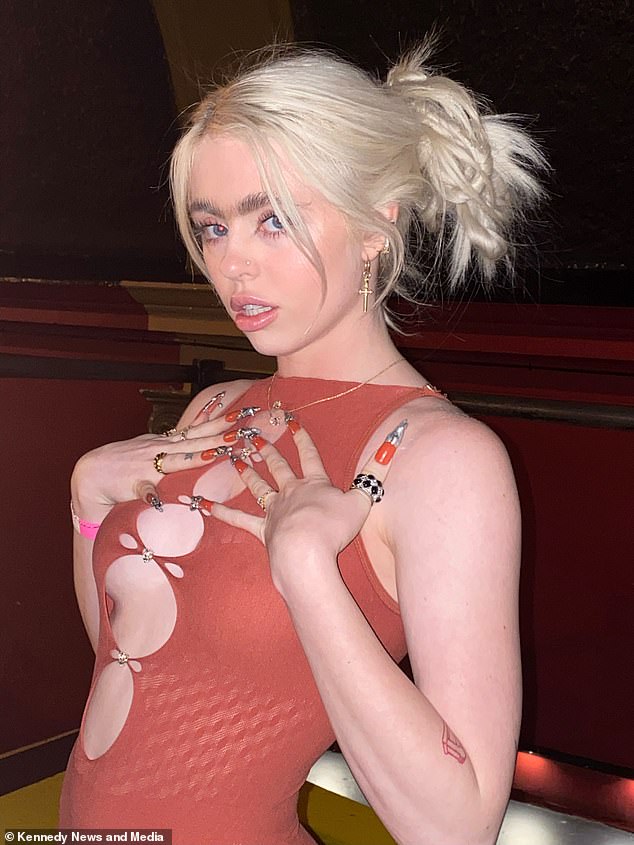 The model has hit back at haters on TikTok who send abusive messages regarding her unibrow. Some people have called her ‘caveman’, ‘caterpillar’ and ‘monkey’

Kenah is keen to encourage others to not feel like they have to fit the status quo or societal beauty standards and to be someone that ‘you’re proud of, happy with and think is beautiful’.

Kenah said: ‘I like my unibrow. I absolutely feel my most confident with a unibrow and think that I wouldn’t feel comfortable looking at my face if I trimmed or plucked it. 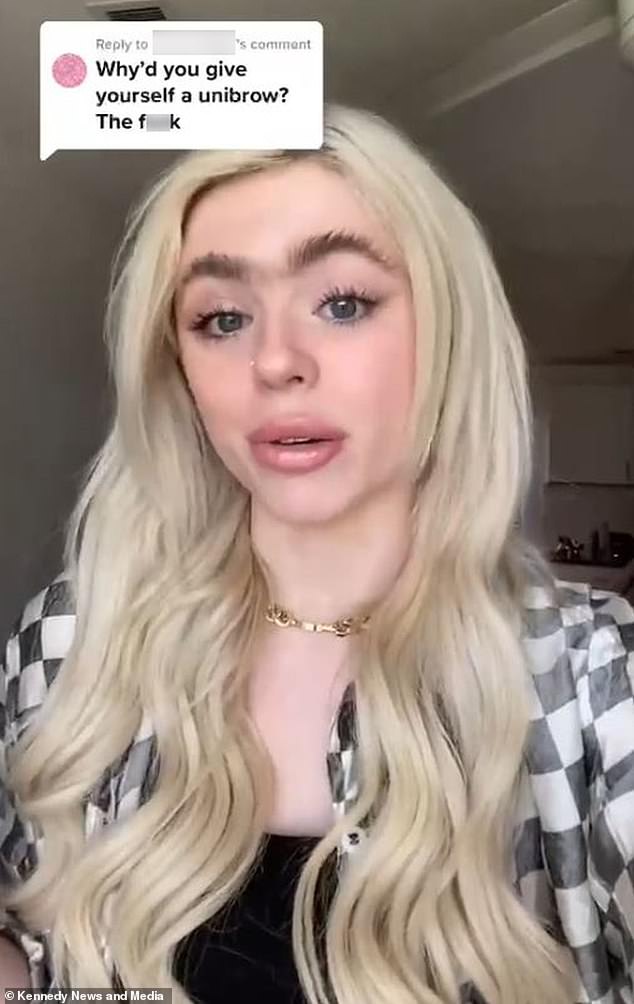 She says that she doesn’t let the trolls get to her, as she reminds herself that she wouldn’t listen to them in real life, so why should she on the internet 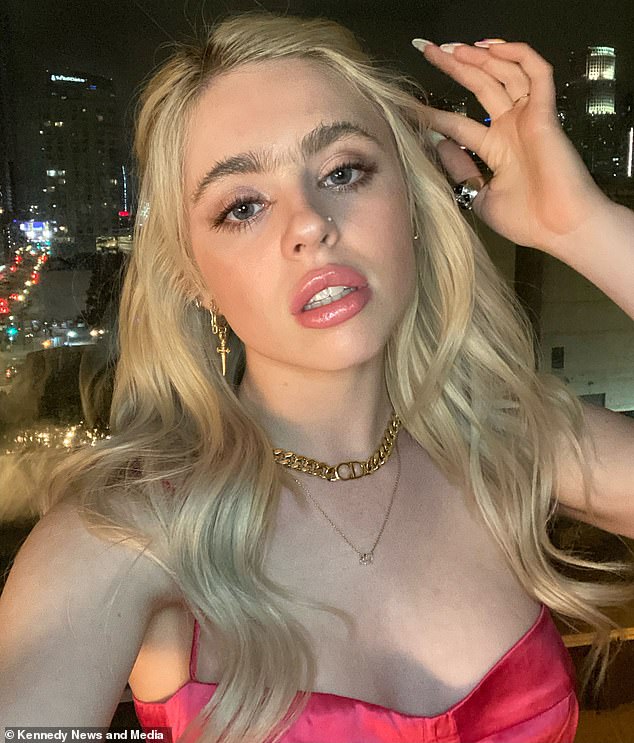 Kenah, from Austin Texas, has always been showered with compliments over her bold brows, with admirers telling her they are ‘perfect,’ ‘incredible’ and her her best feature

‘I also tell myself too, if I wouldn’t take their [troll’s] advice in real life, why would I let them tell me what to do on the internet?

‘I think that giving people the power to decide how I want to look, dress and present myself in day-to-day life is not going to give me results that make me happy.’

Kenah explained: ‘I’ve always had bushy eyebrows. But growing up I remember specifically having really hairy eyebrows and a unibrow.

‘So my mum would always pluck them. 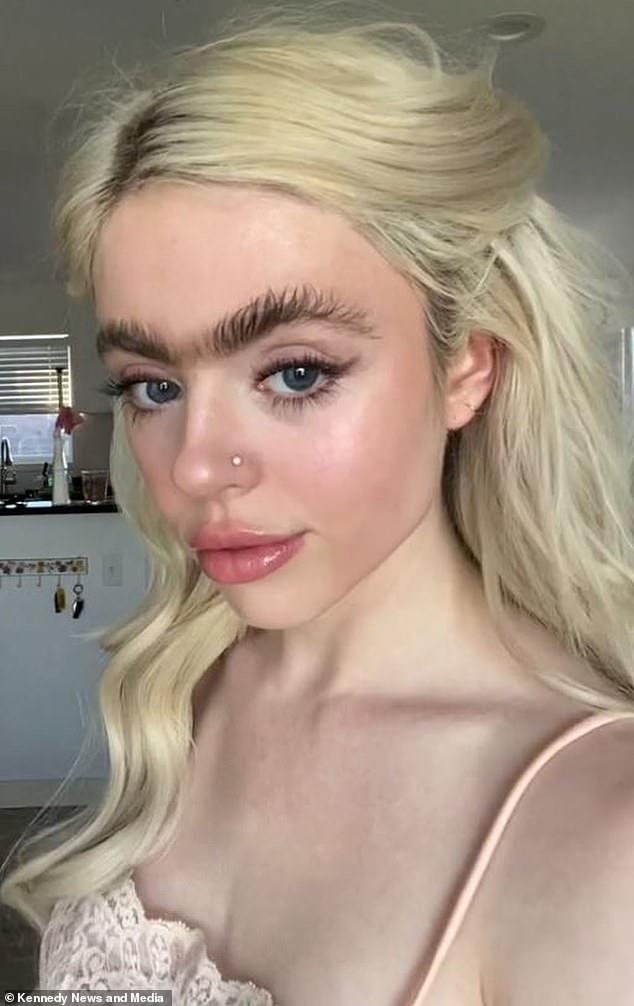 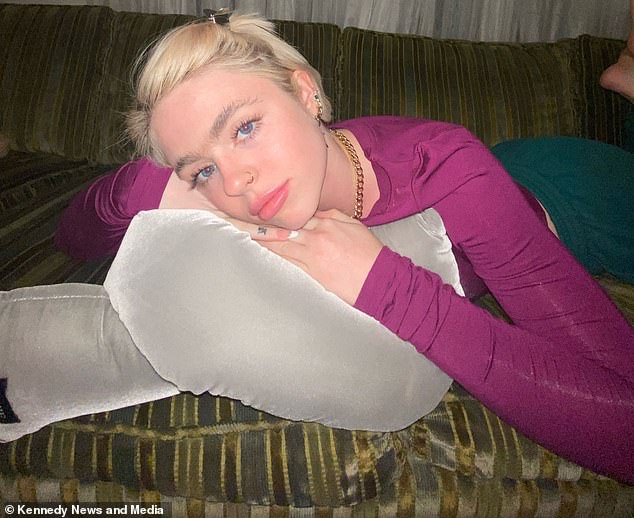 ‘Since I got older she didn’t really have to do that anymore, I thought I liked them and I didn’t feel like it was necessary for me to pluck them just because that’s what everybody else did.’

The Instagram model didn’t set out with the intention of growing a unibrow, it was more that she like her eyebrows and let them grow how they wanted to.

‘My entire life I’ve been told that I have incredible eyebrows, that they’re perfect and that everybody loves them. 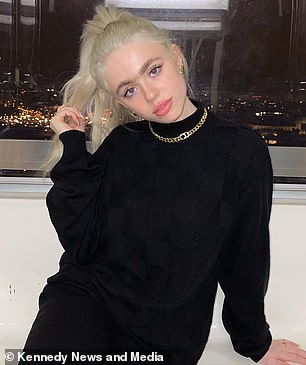 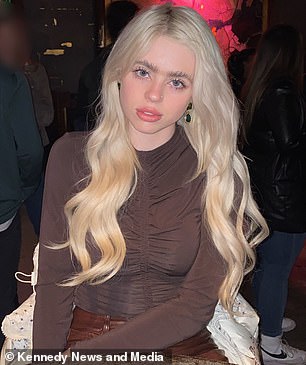 For her entire life, people have told Kenah that she has incredible eyebrows and that they are her best feature

‘I think they’ve always been my most notable feature – especially when I was 16 as I went platinum blonde and that also made them stand out a lot.

‘Naturally, most people just tended to compliment my eyebrows over anything else because they’re a really bold feature.’

The TikToker has only posted one or two videos specifically about her unibrow but received comments daily about it for around a year.

Kenah said: ‘I’ve had people specifically send me DMs like “I love how confident you are and how you showcase your eyebrows, it’s really encouraged me to be myself and to have my eyebrows the way that they are”.’ 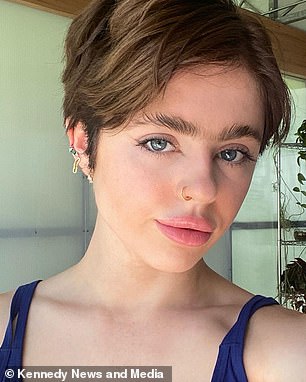 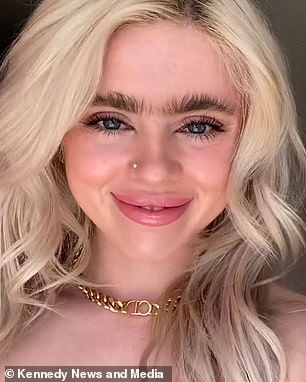 Kenah said that her eyebrows have always been her most notable feature, and when she went platinum blonde at the age of 16, they stood out even more

The model said that these kinds of comments mean a lot to her and she is thrilled that her fans are uplifted by her confident content.

She explained that it makes her feel as though she is doing something right by just being herself and encouraging others to break out of the box and do their own thing.

But Kenah, who was a model for 10 years and still models occasionally, has had a mixed response over her unibrow online as she also receives negative comments. 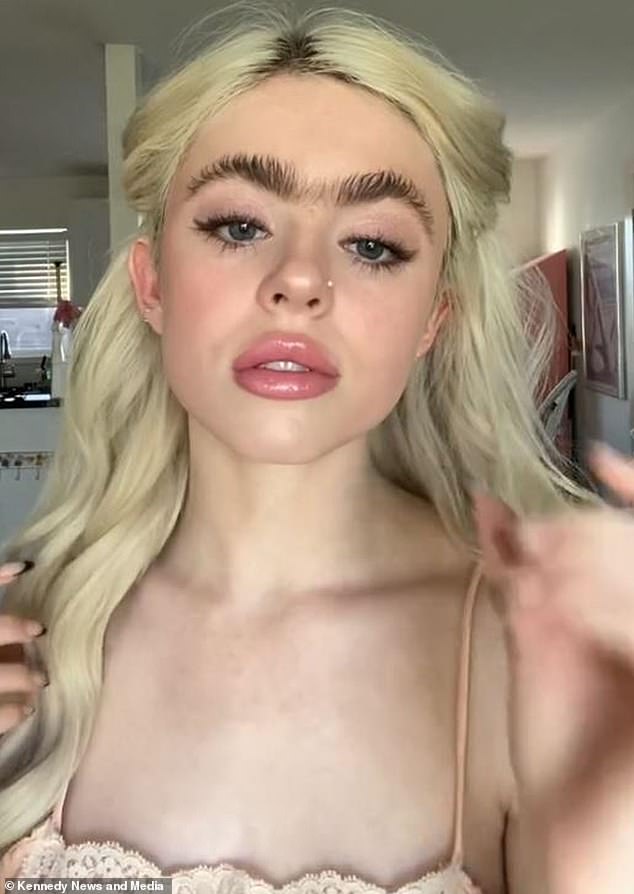 Kenah admits that many people have said some horrible things to her about her eyebrows, with many calling her ‘caterpillar’

Kenah said: ‘I’ve also had a lot of people say really horrible things, to the point where I’ve sometimes wondered how deeply that hatred is rooted in terms of the projection in correlation to my unibrow.

‘People call it a “caterpillar” a lot on the internet.

‘I’ve had men send me DMs that are basically like “you’re a monkey”, “you should kill yourself”, “you look like a neolithic caveman”.

‘Somebody sent me a video of someone cutting their wrists one time and told me that I should shave, I thought that one was pretty extreme. 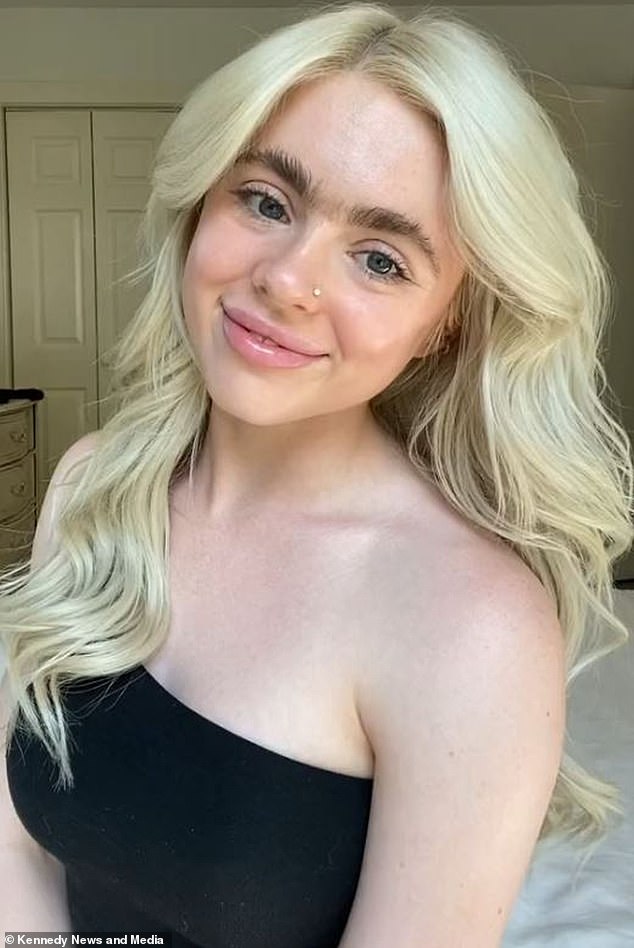 Despite her unibrow being referred to as a ‘caterpillar’ on the internet, Kenah regularly posts videos showing it off in all its glory, and has amassed over two million likes from doing so

‘There are some comments that just make me sad and not because of my eyebrows but it’s clearly a reflection of misogyny and that’s upsetting to me, other than that, it is what it is.

‘Most of the negative comments come from men.

‘I do get a fair share of negative comments from women also but anyone who’s ever taken their time to DM a really vile horrible message, it’s almost always a man or an account that you don’t really see somebody behind.’

Despite her unibrow being referred to as a ‘caterpillar’ on the internet, Kenah regularly posts videos showing it off in all its glory, and has amassed over two million likes from doing so.

She said: ‘I think what’s hard about speaking to those people [trolls] directly is that I can recognise that they’re projecting because they’re unhappy but I don’t necessarily think that’s something they can recognise – that’s why they’re trolls on the internet. 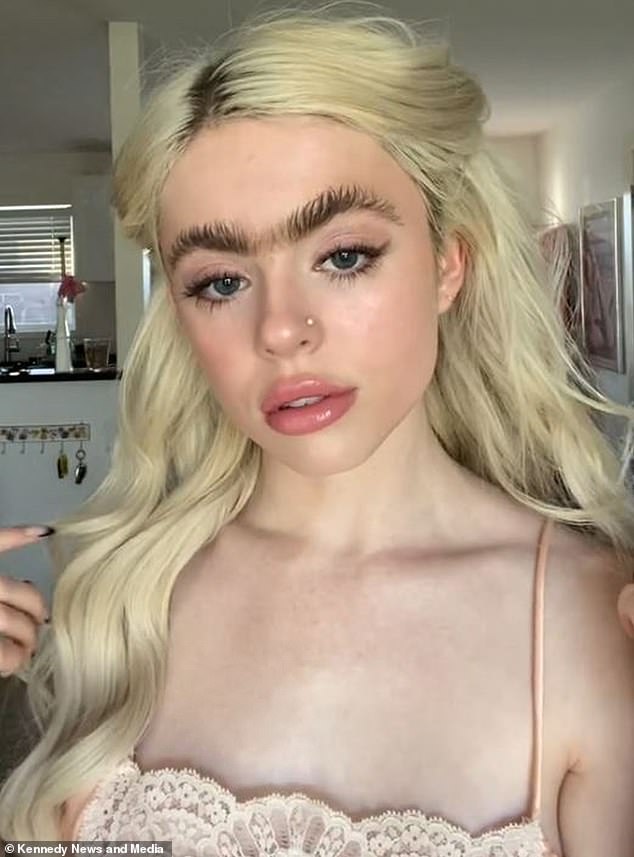 ‘Something that I wish they would do is self-reflect and maybe ask themselves why it makes themselves feel better to be an anonymous person bring other people down on the internet.

‘But there’s nothing that I can do or say to make them understand that so I think that for me the only response that I can really have is to continue being myself and that’s it.

‘At the end of the day you should be somebody that you’re proud of, happy with and that you think is beautiful, and not necessarily beautiful in a way that’s reflective of societal beauty standards or the way that other people perceive you.

‘But true happiness and self-love comes from being somebody regardless of who everybody expects you to be.

‘And I know that’s something that’s really hard to do but that’s the key to really loving yourself outside of what everybody else pushes on you.’