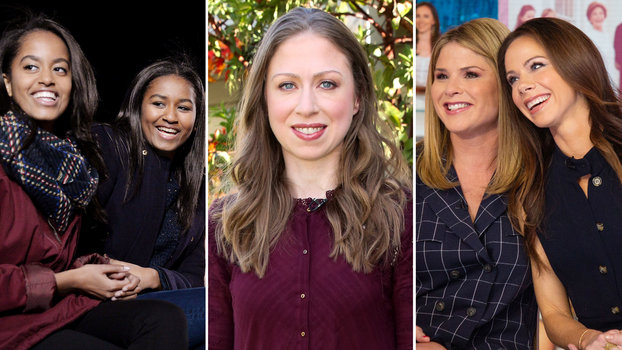 The world may be fascinated by the unlikely friendship between a certain former President and former Frst Lady, but even more unexpected might just be the special relationship between the most recent former First Daughters — Chelsea Clinton, 38, twin sisters Barbara Pierce Bush, 37, and Jenna Bush Hager, 37, and Malia, 20, and Sasha Obama, 17.

From their shared experiences in the White House, the former First Daughters have been able to forge a unique bond, one that overlooks their vast age differences and even their parents’ opposing political views — a fact made clear when the Bush twins welcomed the Obama daughters to the “rarified club” of former first children with an emotional farewell letter as they prepared to leave the White house in January 2009.

“Now you are about to join another rarified club, one of the former First Children – a position you didn’t seek and one with no guidelines,” the letter, which was published by Time, reads. “But you have so much to look forward to. You will be writing the story of your lives, beyond the shadow of your famous parents, yet you will always carry with you the experiences of the past eight years.”

The sisters even went out their way show the Obamas around their new home back in 2009, recalling a special memory involving the White House banisters.

“When you slid down the banister of the solarium, just as we had done as eight-year-olds and again as 20-year-olds chasing our youth, your joy and laughter were contagious,” they wrote.

Over the next few years, the former First Daughters became a support system. Former First Lady Michelle Obama touched on this during an interview with Good Morning America’s Robin Roberts in November, when she shared how grateful she was to the Bush daughters as well as Chelsea Clinton for helping her daughters throughout their time in the spotlight.

“I love those girls,” she said of the Bushes and Clinton. “I will love them forever for what kind of support they provided my daughters. They always had their backs. Somebody went after them in the press, Jenna would get in there and say something. Chelsea would send a tweet out, and that made a big difference.”

Back in November 2017, Clinton came to the eldest Obama daughter’s defense after a video surfaced of the then-teen smoking marijuana online.

She tweeted, “Malia Obama’s private life, as a young woman, a college student, a private citizen, should not be your clickbait. Be better.” Clinton has also stood up for Barron Trump, the only of President Trump’s children living in the White House, and the first boy to live their in over 25 years.

And when Republican congressional aide Elizabeth Lauten slammed the Obama daughters for not showing “a little class” with their appearance at the annual televised turkey pardon ceremony on Thanksgiving in 2014, Hager was quick to throw her support behind the young women.

“I’m fiercely protective of them, obviously,” the Today correspondent told Watch What Happens Live host Andy Cohen. “I don’t think that it’s easy. It’s not a job that they wanted … I had a hard time [growing up in the White House], but it’s also a privilege.”

Hager, who spent much of her college years in spotlight, dealt with her fair share of public scrutiny, particularly following that now-infamous underage drinking incident with her sister in 2001. The former First Daughters even wrote about their experiences in the White House in their joint memoir, Sisters First: Stories From Our Wild and Wonderful Life.

One first daughter who’s on the fringe of the inclusive club is Ivanka Trump, despite her current First Daughter title, as well as her previous friendship with Clinton. The once close pals’ long-lasting friendship unfortunately failed to survive the Trump presidency, as Clinton revealed in a recent interview with Stephen Colbert that they haven’t spoken in “a long time.” No word on whether Ivanka has made headway in terms of a relationship with any other first daughters, however her experience as a 37-year-old is remarkably different than those who lived in the White House as children and teens.

Perhaps, with 2020 presidential election quickly approaching, the women might soon find themselves welcoming another member to their club.