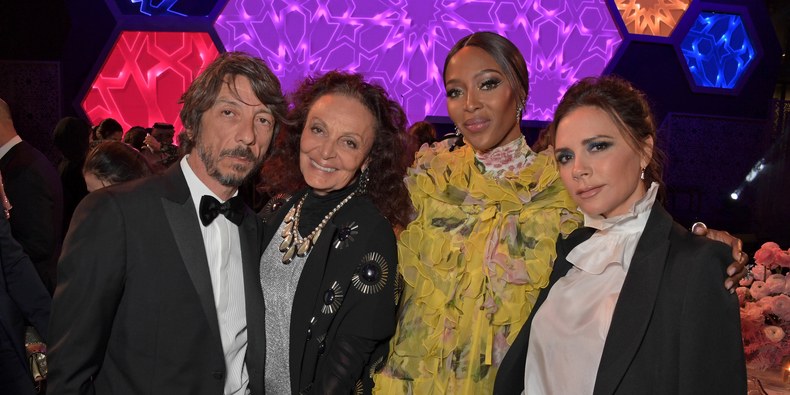 It was like the Met Ball, come a month early. On Thursday night, designers, supermodels, and celebrities swanned around in their finest black-tie. There was Victoria Beckham, deep in conversation with Diane von Furstenberg; Hailee Steinfeld catching up with Josephine Skriver and fiance Alex Deleon; Pierpaolo Piccioli, always the life of the party, making his way around the dinner tables; and, in a flash of yellow chiffon, Naomi Campbell arriving fashionably late, taking her seat just as the main course was about to be served. Except, we were not in New York City, or London, or Paris, or any of the fashion scene’s usual hubs. No, this starry soiree was in Doha, Qatar, some 6,689 miles from the Metropolitan Museum of Art. Welcome to Fashion Trust Arabia’s inaugural prize celebration.

Founded by Sheikha Moza bint Nasser and co-chaired by Sheikha Al-Mayassa bint Hamad Al-Thani and Tania Fares, Fashion Trust Arabia is a new initiative focused on finding and nurturing the most talented designers across the MENA region. To select five winners in the categories of bags, shoes, jewelry, evening wear, and ready-to-wear, the FTA enlisted a incredibly stacked lineup of judges from all facets of fashion. Among them, Beckham, Piccioli, Alexander Wang, Olivier Rouesteing, Carla Bruni, Imaan Hammam, and Sonam Kapoor.

For many, it also marked their first time visiting Doha. (It was a busy week for the city, in general, with the opening of the National Museum of Qatar on Wednesday evening and Natalia Vodianova’s Love Ball on Friday). “I think it’s quite incredible,” Kapoor, who hails from Mumbai, said. “It’s more than I expected. It’s very beautiful, and lovely weather. The food is very similar to my traditional cuisine in India, so that’s nice.” Hammam echoed the statement, “I feel a strong connection to the culture and the people, because I am half Moroccan, half Egyptian. It feels like home.”

Of course, in addition to being tourists, the judges had a difficult task at hand, as they spoke to each young designer, making their way around a dedicated showroom on the morning of the gala before officially casting their ballots. “It’s all very refreshing and things I haven’t seen in the fashion world,” Hammam continued. “I am looking for creativity, and something that is timeless that you can wear everyday, for 10 years.” Kapoor added, “They are very young, enthusiastic designers. The attention to detail and kind of couture that is done is world class. I’m looking for someone who is innovative and traditional at the same time.”

Beckham, especially, was taking her judging duties very seriously. “Being to be a part of somebody’s future is really incredible,” she said. “There is obviously an enormous amount of talent. I want to understand the designers and get to know more about their brand.” So what would get the VB stamp of approval in a room full of talented designers?” I’m looking for quality, I’m looking for something that will stand out and something I haven’t seen before,” she said. “Somebody with big dreams and an interest in a business plan. Someone that is ticking the fashion box, but someone who also has a commercial head on their shoulders, as well, because ultimately, it’s about selling. It’s a full package. That’s a lot of boxes to tick.”

It was, but the prize was well worth it: up to a maximum of $200,000 is awarded to each category winner, as well as access to key regional and global business leaders and industry experts. Alongside mentorship, their collections will also be available to purchase at matchefashion.com. Naturally, tensions were high once the awards gala rolled around (the lack of alcohol, in accordance to local laws, and presence of Sheikha Moza bint Nasser, certainly didn’t help). But rather than draw out the suspense, as soon as guests—including Vodianova, Bruni, Haider Ackermann, Robin Wright, Jourdan Dunn, Alessandra Ambrosio, Peter Dundas, Olivia Palermo, Zac Posen, Anna Brewster, Luke Evans, Jeff Koons, Shanina Shaik, and, curiously, Johnny Depp who slipped in late with little fanfare—took their seats, the winners were announced: Krikor Jabotian (evening wear), Mukhi Sister (jewelry), Zyne (shoes), Sabry Marouf (bags), and, in a tie, Salim Azzam and Roni Helou (ready-to-wear).

Following a surprise performance by Bruni, it was off to the after-party, held at the pool of the W Hotel. And given the amount of designers buzzing around late into the evening, the DJ spinning Cardi B and Jay-Z, and the sheer amount of cigarette smoke wafting in the air, it certainly gave the Boom Boom Room on the first Monday in May a run for its money.