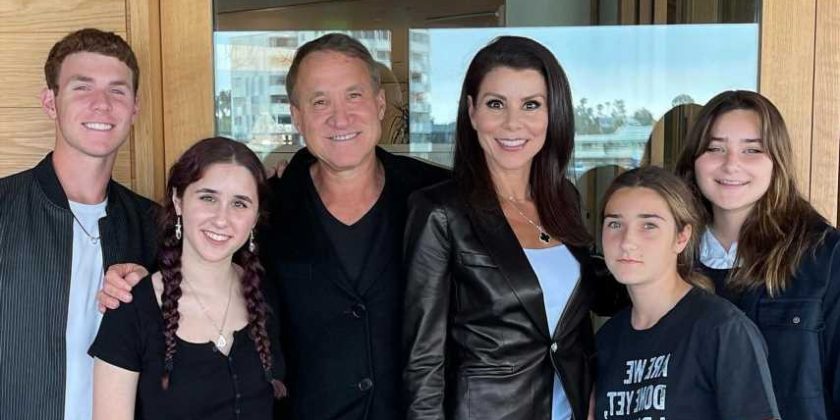 Some might say Terry and Heather Dubrow are the new Hollywood ‘it’ couple. The pair have made a name for themselves in Terry’s E! Entertainment shows Botched and Botched By Nature and Heather’s 2006 debut on Bravo’s The Real Housewives of Orange County (RHOC).

The two have four children who have also been sharing their personal journeys recently: twins, Nicolas and Maximillia (Max), Katarina and Collette. The pairs oldest daughter Max has come out publicly as bisexual and Katarina recently shared she was a lesbian. The family says they love serving as a platform for what they call ‘normal’ and modern family values.

Most recently, the Dubrow’s have launched a new reality television show, 7 Year Stitch; a seven-week course in personal improvement and marriage advice. According to E! Entertainment, the show gives couples struggling, an opportunity to fix their situation and the Dubrow’s 25-year marriage gives them plenty of experience to help others.

When not filming or planning their next conquest, the Dubrow’s are busy renovating and decorating their home. Check out the special features in their modern Orange County family mansion.

The couple documented the construction of their $21 million, Crystal Cove property. The 22,000 square foot mansion they dubbed “Dubrow Chateau” on the RHOC series was featured on the series premiere of RHOC this year, though they’ve never completely revealed the luxurious amenities of the home.

What we knew for sure was the 40,000 square foot property included ocean views, an in-ground pool, palm trees and a trampoline for the kids. Heather had chosen to design the interior on her own. In fact, the pair made the agreement that Terry wouldn’t interfere in anyway and it appears both are happy with the arrangement.

Walking Through the Front Doors

According to The Sun, visitors can spot fresh flower arrangements around a grand piano and large artwork on the walls in the foyer. Trees are a central theme throughout the home, from the olive trees the Dubrow’s had brought in for the courtyard of the house, to an etched glass window in the dining area.

On the subterranean level of the home, an entire space is filled with a game room. There is pinball, pool tables and a horizontal row of televisions giving off a bar/club vibe and 21-seat movie theater with reclining chairs and large movie screen takes the décor up a notch. Pocket doors open the level up to one large space for get-togethers according to Architectural Digest.

Upstairs, a champagne wall adorns the dining room, including a six-foot trough in the kitchen island that can be filled with ice and champagne for parties and other events.

The couple’s master bedroom has animal print carpeting, neutral bedding and wall art. Also featured is a champagne button in the closet which rings to the kitchen for easy champagne delivery. Off of the master bedroom, a designer shoe closet showcases hundreds of shoes in Heather’s collection.

Heather’s personal closet is the size of a small room and features a rolling ladder to roll around the room and access things on the top shelf. The RHOC mom of four hosts her own YouTube channel, showing designer pieces from her very own closet to more than 51,000 subscribers.

In the connecting master bathroom, two warming drawers for towels is perfect for one getting out of the shower. It has its own seating area and ‘him and her’ stations. According to Velvet Ropes, Heather has her own shampoo sink and two makeup stations – a mini beauty salon in her private space.

The kitchen includes stainless steel appliances with white cabinetry, granite countertops, refrigerated drawers and plenty of space for the entire family. During the season premiere of RHOC, the family ate homemade pizza in the new kitchen, prepared by their private chef.

During the construction phase Terry had seen the kitchen as one of his least favorite rooms of the house, stating it was “clinical and stark” but after the room was put together, he firmly agrees Heather’s designing skills have once again, done the trick.

The living area is also decorated with a neutral palette including marbled flooring, grey furniture, a large fireplace and enough room for the entire family. A sweeping leather couch winds around the room, allowing everyone to take a seat. The living area is in an open floor plan across from the kitchen, nearly the size of a football field.

The gym is large and supports the Dubrow’s diet plan, including high-intensity training, treadmills, ellipticals, weights and more.

There are also several offices: one dedicated to the Bravo stars podcast and another, with plenty of lighting, a fireplace and comfy furniture for guests.

READ NEXT: Meet Lisa Barlow, The Self-Made Millionaire From ‘The Real Housewives Of Salt Lake City’