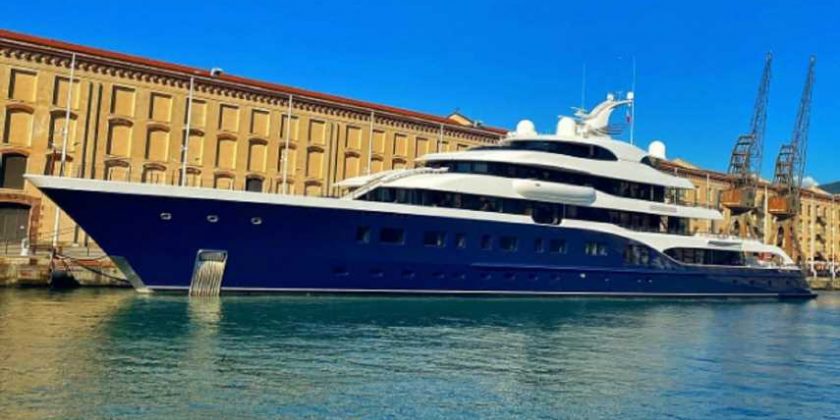 French businessman, investor, and art collector Bernard Arnault is the chairman and chief executive of the world’s largest luxury goods company, LVMH Moët Hennessy – Louis Vuitton. He is currently the third richest person in the world and the richest person in Europe. The French fashion tycoon is one the world’s ultimate taste-makers and his ownership of the super yacht Symphony is a proof that he likes the combination of class and beauty which comes with a price. With the billions of wealth he has accumulated over the years, it is not at all surprising that he bought a luxury yacht.

READ NEXT: Supercar Of The Sea: Inside Conor McGregor’s $3.6 Million Lamborghini Tecnomar 63 Yacht

Ownership of the Symphony

Bernard Arnault is the proud owner of the largest Feadship to be ever made according to the Yacht Habor. The CEO of the French multinational luxury goods conglomerate, LVMH, owns the luxury mega yacht which is worth $150 million. It is not surprising that Bernard Arnault would spend so much for a luxury yacht since he has a stunning net worth of $93.5 billion and currently among the top ten billionaires in the world and recognized as the richest man in France.

Arnault first ventured into the yacht industry back in 2008 when he led the acquisition of the British yacht manufacturer called Princess Yachts. Since then LVMH has been working closely with the world leading brand of custom-built luxury mega-yachts, Feadship. It was in 2015 when Arnault decided to buy Symphony for $150 million. The super yacht has about estimated running costs of $10 to 15 million per year and currently not available for charter.

Features of the Superyacht

The Superyacht Symphony comes with eight huge staterooms that can fit about sixteen guests and a comfortable berthing that can accommodate about 27 crew members on board the yacht. It also has a private deck for the owner. It is created to accommodate about thirty six passengers. The exteriors of the yacht were designed by the world class renowned company Tim Heywood Design. The interiors on the other hand were aesthetically designed with the décor of the yacht being done by the one and only Zuretti Interior Design. The Symphony has been constructed by the Feadship at the Royal Van Lent Shipyard as a simple Project 808.

The luxury yacht is currently among the most sought-after private vessels. Bernard Arnault’s luxury vehicle at the sea is far more than par excellence. It is powered by a 2,415 hp Wärtsilä engine which comes with a powerful battery bank and about three generator sets. It also houses the string of amenities of the yacht such as the appointed entertainment areas, the al fresco bar area for parties and events and the state-of-the-art kitchen that is serving stunning decadent French delights. It is also a 101-meter luxury yacht that was built at the Royal Van Lent Shipyard. Symphony has a steel hull that has an aluminum superstructure. The yacht has complied with the amended Passenger Yacht Code (PYC).

The luxury yacht is said to be an eco-friendly yacht which uses a hybrid propulsion technology and powered by a 4x MTU 16V4000M73 engine. Due to the advance hybrid propulsion technology, the yacht can store energy in its battery bank that can work together with its diesel engines. The main engine on the other hand works hand in hand with the generators and modern battery bank that were attached to the yacht. It uses about 30% less than the energy that a normal yacht uses. The maximum speed of the yacht is about 21 knots and the cruising speed is about 10 knots. The Symphony was ranked 50th out of the top 100 superyacht around the world with a 101.5 meter six deck. The structure of the yacht was made by the De Voogt Naval Architects. The floors and ceilings of the yacht are encased in a light wood panel which was complemented by the wooden furniture with accents of gold and natural tones.

The Symphony contains luxury features such as the 6 meter glass-bottom swimming pool located on the main deck, an outdoor cinema that was aesthetically placed on the bridge deck and a stunning Jacuzzi on the yacht’s sundeck. The owner’s deck is also equipped with two bathrooms, sauna, forward terrace that has a Jacuzzi as well, a private office space, a spacious lounge and dressing rooms. Since the wife of Arnault, Helene Mercier, is a concert pianist, there is also a piano on board. The owner’s deck also has deck area perfect for lounging with a dining table that can accommodate about 20 people. It also has two elevators for passengers to use and one elevator even features a 15-metre interactive video screen which can play video footages upon the request of the guests.

READ NEXT: Who Will Bernard Arnault Choose to be a Successor of his Billion Dollar Empire?