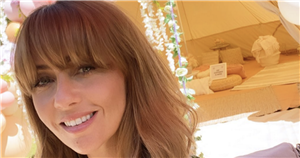 The 38 year old soap star enjoyed a party with pals over the sunny weekend and she shared snaps of the event with her 385,000 followers.

Samia looked stunning in a blue floral dress which went down to the floor, and she wore her hair in loose locks.

Posing for photo with a friend in front of a large gazebo, Samia smiled at the camera surrounded by balloon displays and flowers.

"We had a fab garden party yesterday and this gorgeous bell tent made it extra special!" The star wrote.

She added: "Me and @slongchambon even managed to have a cheeky drink in there when the kids left.."

The tent was kitted out for a party, with beautiful scatter cushions around the space and dream catchers hanging from the ceiling.

The party teepee was erected in Samia and her husband Sylvain's expansive garden and it looked like a perfect spot for drinks and dining over the weekend.

The sweet youngsters looked delighted as they sat on the cosy cushions inside the tent, and a sign could be seen which read 2021 glamping.

Corrie star Samia also posed for an adorable photo with her Dancing On Ice husband Sylvain as they enjoyed a drink in the tent by themselves.

Fans and friends were impressed by the garden display, with Samia's co-star Lisa George writing: "This looks fabulous!!! Xx"

Samia also shared a separate post while posing in front of the tent with the beautiful balloon arch in display in the background.

"Isn’t Summer just the best.." the mum-of-two penned, and she told fans where her gorgeous dress is from.

The frock is from Warehouse, but the star added that she'd purchased it a couple of years ago.

Samia's garden soiree comes after the star warned her social media followers of the dangers of a new viral magnet trend sweeping TikTok.

The actress revealed that her friend's daughter had to undergo emergency bowel surgery after accidentally swallowing two tiny magnets, which could have been "fatal".

In a post shared to her Instagram Stories on Tuesday morning, Samia shared several images of the tiny magnetic balls in question, with the caption: "If you have anything like these and kids…"

And in a follow-up post, the soap star added: "Please throw them away… they are super dangerous if accidentally swallowed."