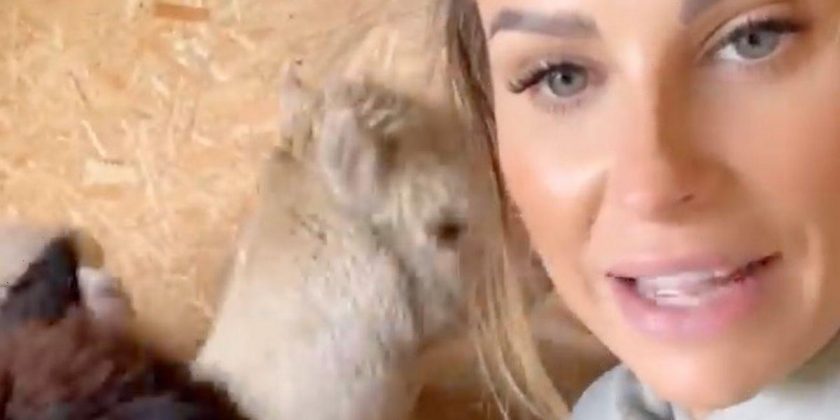 Mrs Hinch is fast making a new life for her family in the country after moving into Hinch Farm earlier this year.

The 32-year-old marked her arrival at the new house with three new additions to the family – three alpacas Roy, Rodney and Raymond – who live in the grounds of the property.

As well as mentioning how much her two sons loved the animals, Sophie treated her followers with footage of them meeting the alpacas for the first time, in a sweet montage clip uploaded to Instagram Stories.

In the extended video, Sophie can be seen standing outside with baby Lennie pointing out the alpacas.

In another shot, her eldest boy Ronnie, two, walks up to the animals excitedly as they step towards him.

The alpacas can also be seen sharing some bonding time with Sophie as she feeds two of them with sticks of carrots and rubs noses fondly with another.

According to Pension Times, the three alpacas may have set the author and podcaster back £10,505.

The financial experts reported that three male alpacas on average cost a total of £6,000, with maintenance such as insurance, vaccinations and general care adding to the figure.

In fact, despite being a generally low maintenance animal, the company estimated that shelter alone could cost upwards of £2,000. However, feeding them is a lower cost as they eat grass and hay.

Alpacas are generally gentle and inquisitive and make excellent companions for other animals such as horses, sheep, goats, and even chickens.

They are herd animals, and remember each individual member of their herd even if they do not see them for large periods of time and even years.

They do not tend to like to be petted or cuddled, however, sometimes make exceptions for their specific owner with whom they are familiar. They are also known to show be gentle towards children.

It's true that they can spit if they are handled incorrectly, but an alpaca domesticated young is unlikely to.

Last week, Mrs Hinch revealed she had camped out in her field shelter with her alpacas as she admits she is "scared" to leave them in the wind.

Storm Eunice battered the UK on Friday, with winds reaching highs of 122mph in some locations, and part of the roof being ripped off London's O2 Arena.

The Instagram shared footage of herself sat in the field shelter with her alpacas as she updated her fans.

Speaking to her 4.3million Instagram followers, the social media influencer said: "Guys, the wind here is insane. I’m in the boys’ field shelter with them so they can, I don’t know, I just want to check on them, but they’re fine."

For the latest updates on Mrs Hinch, sign up to OK!'s daily celebrity newsletter.