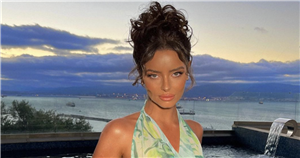 Maura Higgins and Giovanni Pernice have continued to spark romance rumours after they were first linked earlier this month.

Fuel was the added to the fire after the pair were thought to be enjoying the football at Wembley Stadium on Saturday night.

Maura and Giovanni first sparked romance rumours after they both appeared to stay at the same Cornish hotel for a mini break. Maura shared a picture of the beautiful blue sky and view of the sea on her Instagram story with the caption: "Pretty."

Another guest, named Gail Muller, who stayed at the hotel, Polurrian on the Lizard, also shared a snap of a sunset as she wrote: "Ooh and finally finally you just never know who you'll spot at a place like @polurrianonthelizard!! I spotted two Love Islanders and a rather well known dancer.

"But I was much more into these views in the stunning Cornish weather," they added.

Maura and dancer Giovanni have also started following each other on social media, and Maura shared a snap of a stunning bouquet of flowers. The 30 year old took to her Instagram stories to share a snap of the lovely bouquet but kept the identity of the sender a secret.

Recently, the pair were also thought to have enjoyed the football together after they did little to dispel speculation as they both posted separate snaps at Wembley Stadium.

Taking to Instagram Stories, Italian native Giovanni shared a video of himself at the Italy vs Austria Euros match.

Wearing a pink suit, he was seen singing and clapping in the crowd as he wrote alongside it: “#EnjoyTheRivalry #SupportResponsibly #StarOfTheMatch #Heineken #Euro2020.” Maura also posted a video at the stadium as she panned the camera to the football pitch, but didn’t make it clear who she was with. She then shared a glamorous selfie of as she sat in the crowd.

OK! had previously spotted the pair started following each other on Instagram and were liking each other’s snaps.

A source recently told the Mail: "It's early days, but Maura is really enjoying getting to know Giovanni, and the feeling is mutual.

"They're both career driven and ambitious, which are qualities they find really attractive in each other."

Maura had been enjoying the single life since her shock split from former Islander Chris Taylor, spending time with her bestie Molly-Mae Hague.

Not too long ago the star and her ex boyfriend Curtis Pritchard came face to face in an "awkward" encounter at Thorpe Park.

The pair both attended the launch of the Black Mirror Labyrinth live experience but sources said they didn't acknowledge each other.

"Curtis was already in the VIP area with his brother AJ when Maura arrived with her friends," a source told OK!.

"Soon after Curtis and AJ left the area and walked right past Maura. They didn’t even acknowledge each other and it was all rather awkward."