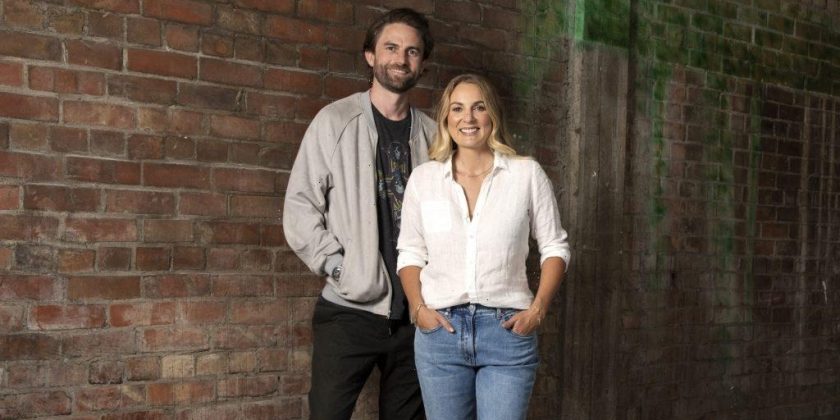 Walk into the unembellished black building tucked away in Morningside, Auckland, later this year and there’s no telling what musical superstars one might find. Niall Horan could be leading songwriting camps for aspiring musicians, Taylor Swift could be next door working on her next big hit and maybe Lorde will stop by downstairs to play an intimate show marking 10 years since she recorded “Royals” nearby.

The possibilities are endless as Grammy-winning musician Joel Little unveils Big Fan, the multimillion-dollar, non-profit music facility that he and wife Gemma have spent two years pouring time, energy and savings into.

With four recording studios and a 180-capacity music venue, the state-of-the-art project is the couple’s “gift” to the music industry, one they hope will help locals fulfill their musical ambitions, whether it’s through studio access, mentoring or simply having somewhere to play their first show or discover their passion for lighting, sound or event management.

“The main goal’s getting people to the next level, whether it’s writing their first song, writing with a big artist or just getting enjoyment from making music,” says Little, showing Variety into the kitchen, where the staff is preparing for after-work drinks to celebrate the completion of construction.

“When I started out, I never thought I’d have a chance of being a well-known producer,” he continues. “I just loved sitting there with a guitar for two hours, then having something that didn’t exist before. It’s so satisfying and good for your mental well-being and confidence, so regardless of the success of songs that come out of here, I want it to be a place people get that sense of enjoyment.”

The challenges faced by budding musicians are something Little’s well-versed in — having started a pop-punk band, Goodnight Nurse, in his youth.

I first met Little while working at a New Zealand magazine – I was the TV editor, never dreaming I’d one day live in Los Angeles interviewing the actors I was writing about, and Little was my intern, never imagining he’d one day be producing award-winning songs in California, home to Green Day, Blink 182 and others who inspired Goodnight Nurse.

The group produced two top five albums, but doing so was full of hurdles. They constantly felt “one step behind” while waiting months for new international music to arrive Down Under. Industry support was scarce and difficulty securing performance venues led to playing open-mic nights.

Little credits the support of music teacher Margaret Robertson and his parents, Paul and Trish (who bought him a $100 guitar at age 13), for helping him build a career, which has seen him working with Swift, Lorde, Shawn Mendes, Khalid and Imagine Dragons.

It’s such hitmakers who Little, 39, hopes will not only head to New Zealand to continue making music with him, but help support the up-and-coming artists who frequent Big Fan when it opens mid-year.

When Variety visits, the smell of fresh paint wafts through the homey interior, while furnishings and décor that Gemma, 36, bought online sit waiting to take their place. Little’s father-in-law’s busy repairing a door, reflecting how Big Fan is a family affair.

One side hosts the private studio where Little will continue churning out hits, a bright and breezy lounge with wooden floors and painted white brick and a room that can double as sleeping quarters for international visitors. “It depends – some might have higher standards!” Little chuckles.

A balcony connects this side to the public wing of Big Fan, where three studios are being fitted with the same high-end gear Little uses, access to which he hopes will accelerate learning for young musicians. While Little might occasionally pop in to offer advice, he’ll be more involved with seminars, workshops and writing programs, where he and A-list collaborators will talk through how they created songs.

Ultimately, he hopes to build a thriving community.

“Sometimes just having a place where people build you up and support you is crucial,” says Little, adding that such encouragement led to him becoming Goodnight Nurse’s “reluctant frontman.” “Hearing somebody say, ‘That’s cool, keep going,’ can spark you to work harder. It’s also helpful realizing there’s other people out there like you and that you can get better faster together.”

He adds, “Some people never even get a chance to explore their love for music because of their situations, so a space like this hopefully means less people fall through those cracks.”

Downstairs, a 180-capacity venue adorned with gold light shades, a corner stage and a bar will allow new artists to perform their first concerts or bigger stars to play intimate showcases.

The building’s garage doubles as backstage, where Little plans to infuse “Coachella vibes” by installing artificial grass, a picket fence and an autograph wall. From here, the distant rattle of passing trains reflects his wish to make Big Fan accessible to anyone by being near public transport.

Of course, his international friends will face a longer journey to the musical hub – but most can’t wait to get there.

“I’ve been talking to people in L.A. and everyone’s interested,” says Little, who’s fresh from a Hollywood trip with his manager, Page 1 Management’s Ashley Page.

“A lot of people are going to the U.K. to work and New Zealand has similar flying duration, better time difference and less jetlag,” he continues. “Plus, it’s beautiful once you get here! You also have separation from the hustle and bustle of L.A. I love the energy in L.A., but coming home, regrouping and being able to sit with a song without all the noise is great. I’ve had more success since I’ve been going back-and-forth and getting that separation than when I lived in L.A., because over there you can get caught up in everything. I think people will find when they come here, they can exhale.”

It’s something he noticed Swift was able to do when they hung during her 2018 visit, during which father-of-three Little won major dad points by taking his eldest daughter backstage.

“She full-on ugly-cried,” says Little, pulling up a photo of the teary, gobsmacked youngster meeting Swift. “But generally New Zealanders don’t bother anybody, so celebrities can get on with things. I can see that being a drawcard for bigger artists.”

While Little won’t detail how much he and Gemma (the “heart and soul of everything I do” and the one who supported him financially through his youth as a struggling musician) have put into the multimillion-dollar space, it’s “more than we expected.”

With Savina Fountain appointed as general manager, the facility will run through a charitable trust, the Little Family Foundation, and profits from studio or venue hire will go back into Big Fan.

“It’s important we do things like this with our money rather than keeping it all for ourselves,” says Little, whose songwriting catalog reportedly made $5.8 million in 2019. “It’s about doing something cool for others to enjoy. If it turns a profit, that just means we can do more cool stuff.”

And just as Little hopes to pass on lessons from his success to others through Big Fan, he continues to incorporate everything he’s learned from chart-toppers like Swift into his work.

“Taylor puts so much of her own life and personality into everything and those are the best songs – the ones that feel most genuine to the artist,” says Little, who produced/co-wrote tracks on Swift’s “Lover” album, plus a song for her “Miss Americana” documentary. “It’s the same with Dan [Reynolds] from Imagine Dragons. He writes from his heart about things that are important to him and that’s why so many people connect with it. That’s the key with writing.”

It was the same rawness from Lorde, aka Ella Yelich-O’Connor, which helped her and Little create her 2013 breakout album “Pure Heroine,” featuring “Royals.” The two recorded at Little’s nearby Golden Age Studio.

“I texted Ella the other day, saying, ‘Do you realize in December it’ll be 10 years since ‘Royals?’’ and she was like, ‘I’m not ready for an existential crisis. Remind me closer to the time!’” he says.

“And we made ‘Pure Heroine’ 200 meters from here, so this area’s close to my heart. It’s great to be taking what we did there, building on that and expanding opportunities for other people. It’s nice, almost 10 years later, to be full circle, back here and hopefully creating a space where that success will happen for others.”