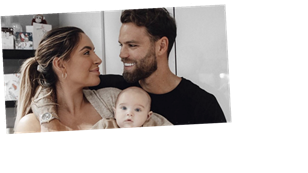 Love Island stars Jess Shears and Dom Leaver met in that famous Majorcan villa back in 2017.

And, despite the odds, they have remained a couple every since.

But what has their life been like since they left the hit ITV show?

We take a look at the former reality stars’ reality…

Where do Jess and Dom live?

The duo live in a stunning family home in Devon, where Jess is originally from.

The house is very modern, with a large back garden, which is on a slant with stone steps leading down to a luscious lawn.

The interior is bright, white and very modern.

We especially love their kitchen island which has a glossy worktop with a wooden base, marrying rustic countryside charm with sleek design.

What do Jess and Dom do for work?

On Dom’s Instagram he defines himself as a model and an influencer, and with his 757k followers this is more than viable.

He is also an ambassador for Fashion Nova Men, who make trendy streetwear style clothes.

Jess also works as an influencer, with her respective 1.2 million followers, and works closely with a baby brand called Natral & Nuutral.

It is not known if the pair have other jobs that are out of limelight, or not.

Are Jess and Dom married?

Yes! The pair secretly married on the Greek Island of Mykonos back in 2018.

The event was totally gorgeous, and of course Jessica looked stunning, but it was actually also very intimate.

There were only 22 guests present, but OK! still managed to secure an invite!

At the time Dom revealed to us: “People said we wouldn't last but now we're husband and wife.

“We're proof that when you meet the right person, there's no need to hang around.”

Do Jess and Dom have kids?

Just over a year ago, in October 2019, Jess gave birth to the couples first child. However it took a while for the duo to break their silence over the gender of their baby.

But a few months later fans were thrilled to find out that the duo has had a little son.

Speaking on JD’s In the Duffle Bag podcast Jess said: "It wasn't so much of a secret, people made more out of it.”

Dom added: "I think it was because they were expecting some kind of grand announcement when he was born, what his name was and stuff and I think we just weren't really fussed."