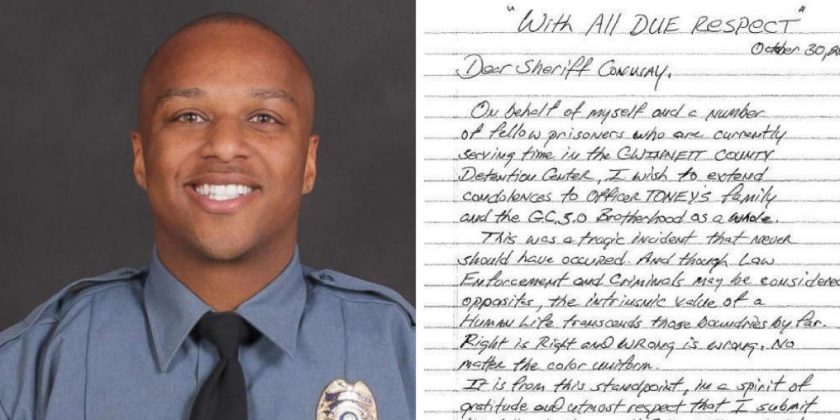 Among an outpouring of condolences and support following the fatal shooting of a Georgia police officer, there was one heartfelt letter that came as a surprise to employees at the Gwinnett County Sheriff’s Office. It was written and signed by 20 inmates in their own jail.

Officer Antwan Toney was killed in the line of duty in October, and the inmates at the Gwinnett County Detention Center thanked him and all law enforcement for their service.

The sheriff’s office posted the letter, dated Oct. 30, to Facebook on Saturday. The two-page handwritten note offers a message of gratitude and is addressed to Sheriff Butch Conway.

“Though law enforcement and criminals may be considered opposites, the intrinsic value of a human life transcends those boundaries by far,” the inmates wrote. “Right is right and wrong is wrong. No matter the color uniform.” 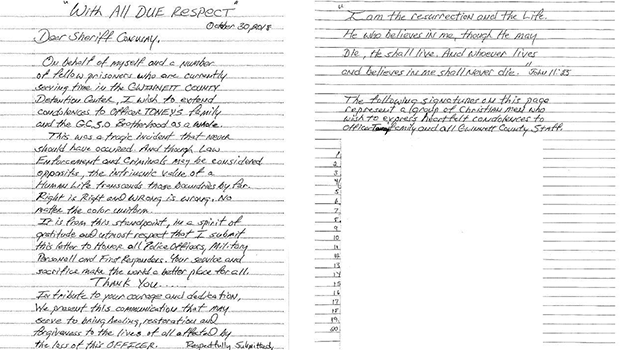 The letter signed by 20 inmates.

“It is from this standpoint, in a spirit of gratitude and utmost respect that I submit this letter to honor all police officers, military personell (sic) and first responders. Your service and sacrifice make the world a better place for all. Thank you.”

Toney, a three-year veteran of the Gwinnett County Police Department, was shot and killed while responding to a report of a suspicious car parked near a Georgia school.

“In tribute to your courage and dedication, we present this communication that may serve to bring healing, restoration and forgiveness to the lives of all affected by the loss of this officer,” the letter read.

In a Facebook post, the Gwinnett County Sheriff’s Office said it was “deeply appreciative of this act of kindness from these men.”

“We think that Officer Toney would also be appreciative of their actions and we hope you are, too,” the post read.

Tafahree Maynard, 18, was one of two men charged in the fatal shooting of Toney. He was shot and killed on Oct. 22. after officers found him in a shed behind a home following a two-day manhunt. A second suspect, 19-year-old Isaiah Pretlow, was charged with aggravated assault for allegedly pointing a gun at an officer during the pursuit after Toney was killed, police said.