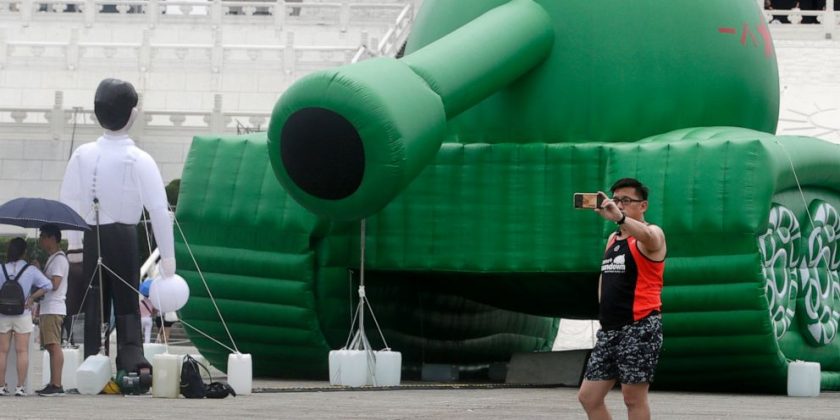 An artist has erected an inflatable display in Taiwan’s capital to mark an iconic moment in the Tiananmen Square pro-democracy protests.

The larger-than-life balloon installation, which stands in front of Taipei’s famous Chiang Kai-shek Memorial Hall, portrays a peaceful encounter between a Chinese civilian and the military tanks that contributed to a brutal shutdown of the demonstrations in Beijing on June 4, 1989. The tank standoff, memorialized by several photographers including Jeff Widener of The Associated Press , has become a symbol of defiance around the world.

Hundreds of people walked by the installation Saturday morning. Many took selfies and photos of the artwork, which has been up for a few weeks.

While public remembrances of the Tiananmen protests are strictly forbidden in mainland China, there are regular commemorations in democratically governed Taiwan and Hong Kong, China’s semi-autonomous southern region. Next Tuesday marks 30 years since the protests, led by students who were joined by individuals from all walks of life, calling for political reform.

China’s ruling Communist Party punishes citizens who dare to speak publicly about the event. While an untold number of people inside China are even unaware of this historic event, others have learned about it through smuggled DVDs and private conversations as well as using software to scale the internet firewall.

Mikel Zhang, a lawyer from Shanghai who visited the “Tank Man” installation Saturday morning, said that the students’ beliefs were different than those of the government. “But eventually … blood was shed,” he said.

An inscription for the artwork says Taiwan stands with the people who have never ceased to resist the “gigantic autocracy.”

Taiwan split from mainland China amid civil war in 1949, though Beijing still claims the island as part of its territory.