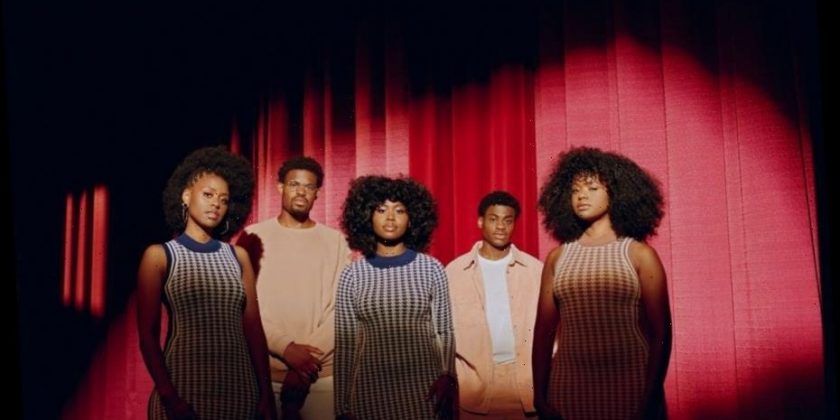 In light of the recent events at the U.S. capitol building, this week’s edition of The Playlist will still focus on the theme of “new beginnings.”

With prayers and positive praise for everyone staying safe in the midst of COVID and the unmitigated caucasity happening outdoors, I am excited to co-curate this playlist alongside the five-piece sibling band known as Infinity Song. “This experience of professional transition during such a tumultuous time in life has definitely been challenging and, at times, very uncertain,” the group shares with me via email. “It’s also been very rewarding. [We’ve] been able to sit down, work on ourselves as a unit, and [our] family has been key to the transition and has kept us going during these times of uncertainty.”

The band is comprised of Victory (The Broken Instrument ), Abraham, Angel, and younger siblings Israel and Thalia who later joined and added to the group’s rich and intricate harmonies. Their song “Everything Is Gonna Be Alright,” has been my morning meditative music, even as cities rage out of control, and “That Guy” feigns ignorance to these disturbing events.

“‘No Weapon’ by Fred Hammond and ‘Ain’t No Need To Worry’ by Anita Baker & The Winans are songs that helped us to stay grounded and centered,” The Boyd Siblings say regarding their own musical choices.

The knowledge that light comes in the morning helps in dealing with the fallout from this wypipo calamity. Infinity Song have significantly added to the good vibrations as they have taken their beautiful busker styles (they performed on the street in places like Bethesda Terrace in Central Park and, of course, Times Square) and married it with smoothly interwoven vocals and arrangements. “Our goal is always to have a positive impact on those who come across us, and to know that we’ve done that to some extent is major,” the group confesses. “Heading into a new year, we as Infinity Song are aiming to start performing live to share the beauty of doing what we love in front of people who appreciate our art form.”

In the vein of “new year, new me,” this edition of ESSENCE’s The Playlist is for those who are in need of healing or desire to unstick themselves from negative situations. Enjoy!

1. Infinity Song — “Everything Is Gonna Be Alright”

The first song from the quintet is a special brew from their debut project, Mad Love. “When we recorded this song for our album, we knew it spoke to us, and we felt that it would resonate with a lot of people,” they share via email. “We didn’t foresee 2020 being such a rollercoaster year in which this kind of reminder would be necessary.” After experiencing such craziness the first week of 2021, the evocative song’s motivational message is key for getting through such trying times.

Returning after a hiatus of almost five years, We Are KING share their own “new beginning” with this special tribute to David Bowie. Identical twin sisters — and friends in my head — Amber and Paris Strother added their own ethereal flair over “Space Oddity,” a reimagined odyssey that will be featured on a tribute compilation out this March. This song has kept my ambitions high amongst the constellations — and if you’re in need of a song to serve as the soundtrack to your own future destinations, this composition is the right North Star to have on repeat.

“‘Against the Wind’ is an impeccable song written and performed by our sister, Victory,” the group says. “It paints such a beautiful picture of persevering in the middle of adversity.” All one has to do is look online or outside to see the need for us to prevail over all of the calamity going on and this offering is strong enough to keep one’s spirits high and focused.

Having spent a few years penning smashes for the likes of Selena Gomez and Harry Styles, Amy Allen continues her string of hits for herself. On her new song, “What a Time To Be Alive,” she ponders aloud just what sort of world we’re living in and the age-old question of what can be done to leave it better than before. Pink Sweat$, an equally dynamic singer-songwriter, joins Allen on this ride, asking what can be done to enjoy a more safe and more sustainable planet. Keep this one going as you take care of your own eco-system this weekend.

Newark, New Jersey singer-songwriter Peter Collins is an imaginatively dynamic artist. Much like the Boyd siblings, Collins took to music at an early age and has expressed himself beautifully on “Sunshine.”

“[This song] is a deeply moving and meditative masterpiece,” the group says happily. “The lyrics ‘darkness won’t last always, light will always win,’ have the power to encourage even the most discouraged listener to focus on the better path.

If there is one thing we all could use in our respective lives it’s change. Jahdan Blakkamoore improves his win-win ratio with this inspirational track called “Change.” The latest from Upward Spiral, Blakkamoore, KYx Kajiiko and a dance crew from Kampala, Uganda, capture the hope that lies within the plights we’re all facing in today’s society. As we all continue to be thankful, Blakkamoore’s “Change” reminds us of how music can speak to the hearts of those who desire a shift in the way things happen in the world.

Artistically adored and internationally acclaimed, PJ Morton is one of the few talents that keeps God centerstage, unabashedly. On “First Began,” a song about recapturing that initial love-struck moment between two potential mates, Infinity Song notes how relatable the N’Awlins singer-songwriter’s words are to them.

“We never want to lose the wonder, the child-like awe,” they explain. “We witness miracles big and small everyday and this track reminds us of that sentiment.” Keep this one in rotation to celebrate love all year round.

Vagabon, better known as Cameroonian-American Laetitia Tamko, has made being an indie-rock star look effortlessly cool. Her debut album, Infinite Worlds, left many audiophiles in awe, and after irresistibly catching buzz she returns with this beautiful cover of Karen Dalton’s “Reason to Believe.” Featuring Courtney Barnett, these two knockout talents offer a dreamy and ethereal song that will help any listener feel less alone.

What makes the Bed-Stuy, Brooklyn creative collective so interesting as a band is that they are classified as having no genre, or being in their own lane. True to their more imaginative-than-thou style and songwriting, Phony Ppl faithfulness to originality no matter the year engrains him to Infinity Song.

“Even with the newness of 2021, some things stay the same,” shares the band. “This song emits so much feeling and coolness, and it just feels amazing to listen to.”

Nubiyan Twist unleashes another one right for the dance floors with “If I Know,” featuring the Ghanaian super-duo K.O.G. (Onipa / K.O.G. & The Zongo Brigade). For those chasing summer or just in need of some space and peace, this hard-hitting Afrobeat bop is one for those who “respect everybody” and “always encourage” people to stay on the good foot.

With 2021 being a new beginning of sorts for those people whose skin has been kissed by the sun, Nubiyan Twist’s Freedom Fables are the perfect parables to play out of your speaker as a call for unity.

Catch new editions of ESSENCE’s The Playlist on Fridays and follow us @ESSENCE and @KevitoClark on socials to stay in tune with us online.