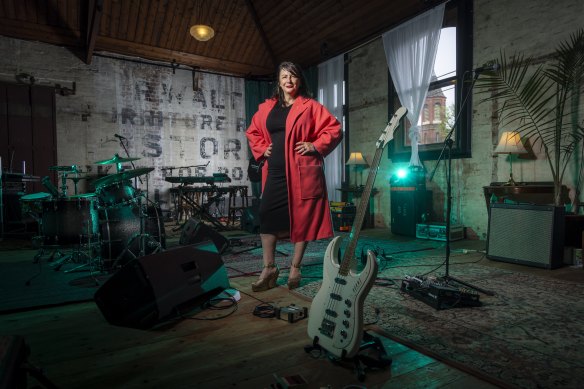 When Helen Marcou messed up badly, it was family that saved her. Punk rock and outsider art had given her life as a teenaged tearaway on the streets of St Kilda in the late 1970s. But by her early 20s, running an art space in Prahran alongside the likes of Howard Arkley and printmaker Pierre Maroni, hard drugs and violence were fast draining it away.

“The relationship I was in became ugly; violent,” she recalls. “When I finally broke down and told my family what was going on, like all good Greek families do, they plucked me out of that scenario, cleaned me up and sent me back to Greece.”

Her parents Maria and George were civil war refugees. They met here, at a wedding in 1956, married quickly, then began sponsoring his family to join them. Helen and her older brother Marco grew up on the move, from Coober Pedy to Perth and back to Melbourne, but the love and support of an extended family was always close.

“They felt that I needed a cultural influence that wasn’t the dark bowels of the Melbourne underworld — and I did,” she says of her rocky start to the 1980s. “I was so happy to be taken out of that violent and abusive scenario that when I did get over to Greece, I loved it.” 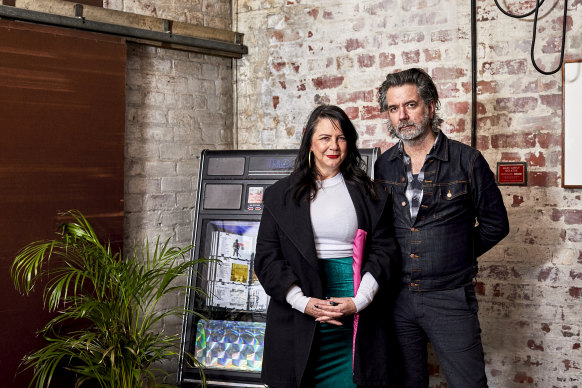 The battle for her soul wasn’t quite over yet. Fortunately, neither was her passion for the rich culture of Melbourne’s underbelly. Those infamous Crystal Ballroom years evolved into a vast and diverse music scene that would be the envy of the world, and in which she’d become a vital player.

On returning from Greece, to avert falls off the wagon, Marco would chaperone Helen to and from her job managing a restaurant on Toorak Road, South Yarra. There she made a chance re-acquaintance with an old friend, Ian ‘Quincy’ McLean, now leading a successful band called Blue Ruin. After several months of old-fashioned courting, one night he invited her to make a fateful choice.

“We were out at a club and there were a whole bunch of my ex-junkie friends hanging around. Quincy looked me in the eye, held me close, and he said, ‘See all these people in this room? You can choose to hang out with them, or you can be with me, and we can start something together’.”

The thing they started was a family. As we speak in the elegant back garden of Alimentari in Collingwood, Angus and Lola are young adults off discovering the world. In another sense, their family is bigger than Melbourne itself – if you can apply the word to their business, Bakehouse Studios, and everyone who has passed through its doors since they opened in 1991.

You probably know Bakehouse, the 120-year-old building in Richmond with the vintage microphone logo and the constantly changing paste-ups by local artists on its imposing Hoddle Street facade. Hidden inside is a multi-storey warren of musicians’ rehearsal rooms, also magnificently decorated by artists as renowned as Patricia Piccinini and Emily Floyd, spinning off a courtyard so lush and spectacular it’s soon to feature on an episode of Gardening Australia.

Festooned with repurposed junk and antiques, the Bakehouse’s lovingly renovated spaces have catered to just about every musical artist who has drawn a string in Melbourne these last 30 years. 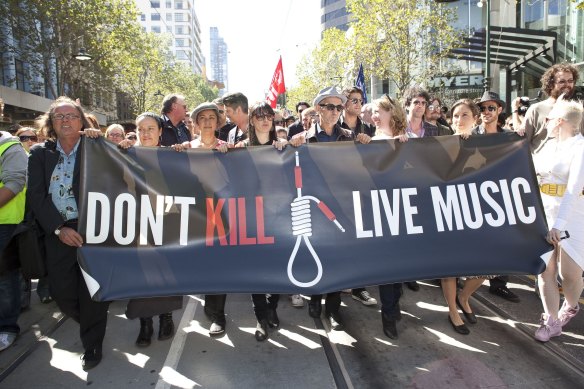 Its de facto community hub status was sealed in 2010, when Marcou and McLean led the SLAM rally (Save Live Australia’s Music) which effectively rescued our world-beating live music scene from an advancing tide of misguided regulatory policy.

“We realised we had agency because after so many years of running Bakehouse, we knew everybody,” Marcou says. “We knew journalists, we knew politicians, we knew musicians; you know, ‘I’ll just ring Paul [Kelly]…’ We didn’t have any hidden agendas. We didn’t manage artists. We weren’t part of government. We weren’t part of any organisation. We had a pure agenda. Naive as f—, but pure.”

The grassroots victory of SLAM is a feelgood story for the ages, the first step in a co-ordinated act of industry empowerment amply documented wherever the history of Victorian music is told. But in the course of shedding their naivety, the new power couple of Australian music turned on a light not easily extinguished. For Marcou, the realisation of her influence meant a newfound sense of responsibility that hasn’t rested since.

A decade on, her many accolades include induction into the Victorian Women’s Honour Roll for her leadership in the arts and her foundational role in the Victorian Government’s taskforce for prevention of sexual assault and harassment of women in licensed venues.

She squirms a little at the mention of her Order of Australia, which she and McLean were awarded in 2019, but says she wears it with pride at conferences, “particularly addressing young women, to show that someone who started off as f—ed-up as me can sit in society with that kind of recognition.”

The first observation we made as we reopened is that women weren’t coming back. Women were gone; the emerging were gone.

Today she’s keen to talk about the Bakehouse Bursaries project: an assistance package for women and gender-diverse musicians in urgent need of rehearsal space and production equipment. Following a successful rollout in 2021, the second round of applications is open until February 28 to established and emerging bands and solo artists facing hardship.

The need arose, she says, in the immediate wake of the COVID lockdowns; a need once again made evident in the course of her day job on Hoddle Street.

“Imagine this. We’ve been shut for 200 days and whatever, and the first observation we made as we reopened is that women weren’t coming back. Women were gone; the emerging were gone. Women were home-schooling; we were looking after elderly parents, we were giving up work to do that. Financial opportunities were being lost and the first thing to go was art.”

In an interesting reversion to classic rock tropes, “the dad bands were the first ones that came back,” Marcou says, referring to the gangs of older mates often in the midst of successful corporate careers who meet to indulge their passion. Don’t get her wrong. “We love them,” she says. “It’s an important social thing… there’s a dad band that’s been coming to Bakehouse for 30 years every Tuesday night and they kept paying for their weekly rehearsal all though lockdown.”

But much has already been made of government stimulus packages skewing towards male-dominated jobs. Music venues, too, were letting hard-won gains for equality slide. Marcou says she was seeing “line-ups from [bars] that didn’t have a woman on stage for 12 months. The pubs were the first to admit, ‘We need thirsty drinkers in here’. So that meant bloke rock’n’roll bands.

TAKE 7: THE ANSWERS ACCORDING TO HELEN MARCOU

“So all of that work that we’d done around equality and diversity and safe spaces, everything was just gone because of survival mode and that introspection of venues needing to survive. And from our point of view, we needed to get them back in.”

The first Bakehouse Bursaries were awarded to 18 musicians in 2021, with selection input from disability organisation Music Matters, Aboriginal Victorian Women and others in Helen Marcou’s vast network of collaborators. This time she’s aiming for 25 places, with help from the Myer and Playking Foundations and proceeds donated from the recent Punters Club Reunion.

“Everything happens around a table with me,” she says. “So whether it’s my Greek family and our Sunday lunches to working in high-end hospitality and then pouring all that fuel into Bakehouse… that deep sense of hospitality, and respecting people, is where that all comes from.

“Anything we’ve done flows on from respect for the artist. The reason we did the SLAM rally was because we value artists. Not the venues, necessarily. At the core it was not about selling beer. It was about giving artists opportunities and making sure we didn’t lose our community.”

Inclusivity is “such a cliched word,” she says later, as this table gets cleared. “I hate it actually. But we have to live by it and go out on a limb. Sometimes you get your head cut off. Dudes don’t like it when I call them out about their [musician] line-ups or their lack of diversity, but I can’t live any other way.

“I must say I have never felt invisible as an older woman. I might in a crowd, and I don’t mind that at times,” Marcou says. “But I’ve felt that I’ve just needed to make myself louder and more colourful to be noticed. Because I’m into kicking shins, you know?”

Bakehouse Bursary applications can be made at www.bakehousestudios.com.au until February 28, 2023.

Who? What? Why are we so fascinated with these celebrities?