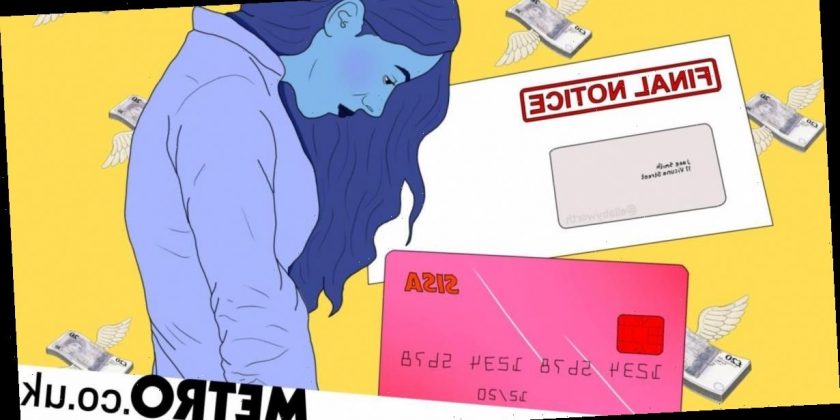 It’s become something of a joke in my family, wheeled out when we’re eating dinner or when the topic of money, mortgages or credit scores comes up. ‘How much debt are you in again, Claire?’

I’m the one who is irresponsible. Bad with money. A terrible adult. Of course, I encourage this – it is easier to stomach being the butt of someone’s joke than the cause of someone’s genuine concern. But they are also concerned, and they should be.

When I was a child, my parents would give me and my brothers pocket money every month. My older brother would invest it in something – perhaps the business he started at the age of 11 or a very low yield bond. And my younger brother would save it – squirrelling away those monthly pennies until his bank account grew before his eyes.

I, on the other hand, would go to Accessorize or Topshop the day the cash hit my pocket and blow the whole thing on a slogan T-shirt or a ring that would turn my finger green. As I’ve grown older and started getting an actual income, I have continued to spend the money I make both quickly and without much thought, and every time I tap my card on the contactless machine that dopamine hit floods my brain.

It’s not uncommon. I have a lot of friends who are also in debt. According to the latest findings from the Office of National Statistics, 12.7million households are in significant financial debt, and the mean household debt from the April 2016 to March 2018 period was £9,400: an increase on the previous period.

Early on in my career when I was earning just £16,000 a year and living in London, I took out my first credit card (with a £3,000 limit), and extended my overdraft by £2,000. Within months I had reached the bottom of both of them.

My friend and I would go to the pub after work, and over glasses of house white we would drone on about how hard it was to be a millennial adult with a pitiful income (book publishing eh!), who also desperately wanted to wear nice clothes, have a social life and perhaps, yes, buy a latte in the morning. Of course we were in our overdrafts. And no, we weren’t worried about it!

In fact, it was surely a rite of passage – a story to tell in our future memoirs about our frivolous, raucous twenties.

What started as a fun-loving character trait in my early twenties steadily became a compulsion as the years went by. I suffer from anxiety and panic disorder and I’ve found that the act of buying something I want is instantly pacifying.

As I’ve grown older and started getting an actual income, I have continued to spend the money I make both quickly and without much thought, and every time I tap my card on the contactless machine that dopamine hit floods my brain

This compulsion, breeding with every purchase, turned into more borrowing and more debt. Including the money I owe my dad, my total debt comes to more than £10,000, and now that I have to repay it in large lumps every month I am starting to wonder if those Diptyque candles were worth it.

Interestingly, research from YouGov for KPMG has shown that 42% of millennials report that debt repayments make up a significant part of their outgoings, and more than one in five spends over 60% of their income on payday.

Half of millennials have had to contend with the increase in student fees when they were hiked in 2012, and perhaps the sheer vastness of the final figure created a feeling of apathy around debt in general. What is a little more debt on top of that insurmountable pile?

Salaries have also decreased, rent and property prices have gone up and going out to eat and drink is seen as normality rather than luxury. If we try to save, interest rates are so low they offer little incentive in comparison to what generations before us benefitted from. In short: though we millennials have our part to play, the system and today’s societal norms are certainly not helping.

Overspending, problems with debt management, the psychological impact of spending – these are not nearly talked about enough. Not in schools and not in society in general. Some people just seem to have an innate knack for money management; perhaps their parents have drilled it into them, or perhaps they have a natural nervousness about being without it.

I have friends who are really good with money and friends who aren’t. The ones who are, similar to my brothers, look at me with bemusement and a bit of second-hand terror. How do I not think about saving for a deposit on a house? How do I cope with the anxiety of being in my overdraft? Our brains just simply do not align.

In recent years, as my anxiety around my money problems has grown at the same rate as my arrears, so too has the literature on ‘becoming debt free’. I have read countless articles and essays in newspapers, online and in tell-all memoirs about personal finances by recovering money-problemed people who, through hard work, therapy and serious budgeting, managed to cut their debt in half – or clear it completely.

I follow Instagram accounts devoted entirely to teaching their followers how to Get Better With Money. They cite their own experiences. They write that they were £10,000 in debt by the age of 25 but now they are debt-free, have a savings account and can afford to go on holiday without using a credit card.

Sometimes I catch myself thinking that by simply reading these articles and following these accounts I’m halfway to being financially responsible myself. Then I realise I have £7.76 in my current account, two maxed out credit cards and no idea when my next invoice is going to be paid.

I’m still very much in debt, and I suspect I will be for a while to come. The older I get the more I see it as a problem, and that must be a step, albeit a small one, in the right direction. So, this is not about how I get out of debt, that is still to come.

Rather, this is a cry for less shame and more openness about money. I think children should be taught about money management in school. Although it wouldn’t negate a person’s innate disposition to the way they approach it, it would offer necessary information and warn of the consequences of handling it badly.

There is a link between mental illness and money, and like with mental illness, an atmosphere of honesty is an absolute necessity. So many of us struggle with our finances, and if we felt able to talk about them, perhaps we’d seek help before it’s too late.

MORE : The Chase’s Governess Anne Hegerty reveals she got into debt after falling behind on her bills

MORE : Money expert shares five tips for feeling confident about your finances amid coronavirus and beyond