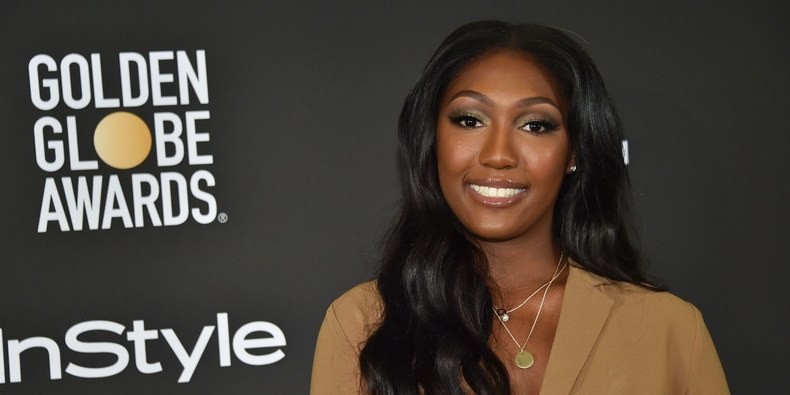 The wildfires burning across California may have gotten in the way of announcing it, but Inas Elba, Idris Elba's's 16-year-old daughter, is more than happy to tell you that she's been named this year's Golden Globes Ambassador, following the likes of Laura Dern and Dakota Johnson before her. Both were known as "Miss Golden Globes"—a title that the awards moved away from last year, inaugurating its genderless approach with Simone Garcia Johnson. As it turns out, that's not the only thing she and Inas have in common; both took on their Globes duties in their junior year of high school—meaning they were juggling them while prepping for the SATs. And that, Elba noted while driving from interview to interview—rather than tending to the three papers she had due the next day—is no easy feat. Ahead of the awards in January, she talks mental health, acting, and choosing not to talk about the fact that her dad was recently crowned the sexiest man alive, here.

Congrats on this! When did you hear the news?

Probably about two months ago, and I haven't been able to talk about it so I'm totally lapping up the interviews because I love talking about it. [Laughs.] I found out through text from my dad, so that was fun. He'd told me there was a big surprise for me, and then we never had time to talk about it, so I was like, "Dad, what's the surprise, what's the surprise, what's the surprise?" So finally he just sent me a text because he was so tired of me asking questions, and I was like, "Oh my gosh, is this actually for real?" Because I've never done anything like this, and this is major and huge. And my mom [the makeup artist Kim Elba] was like, "Yeah, you're the Golden Globes Ambassador!" So I was flipping out and screaming and totally fangirling, to say the least.

Do you normally tune in to the Golden Globes?

Yes, I watch them every year. We had a Golden Globes party when my dad won, but I've never actually been, so the first time I'll be there is when I'm involved with it, which is pretty cool.

Happy Father’s Day to literally the coolest dad in the entire world (even though your dad jokes are really lame). Thanks for always encouraging me and being my role model! I love you! @idriselba

You're only the second person to be the Golden Globes "Ambassador," rather than Miss or Mr. Golden Globes. What are your thoughts about removing gender from the picture?

I think it's super, super cool, because it's 2018, we're coming towards 2019, and there's been a lot of major changes, you know? It's really great that the Golden Globes are transforming and taking part in those changes, because it represents equality, and that's definitely something I stand for.

You've also decided to take a stand for mental health through your ambassadorship. I was so glad to hear that, because people don't talk about it nearly enough.

How did it end up being your focus?

Basically, mental health is definitely underrated; people just don't talk about it. And since I have this platform now, I thought it would be a great opportunity for me to really shine a light on it, and to talk about it with African Americans and teenagers.

Did personal experience play into it at all, too?

My mom actually suffers with mental health issues, so that's definitely something that got me started with it and that now makes it really great, because we're sort of bonding. We only recently started talking about it, but it was never something she was trying to hide from me or anything like that. It's something that I experience, so I really want to talk about it.

Happy birthday to my lovely mommy! Glad I get to celebrate your 18st birthday with you and many more to come!? Love you loads. ? @kimelba

Do you have any advice for people who are also struggling?

I definitely think we need to encourage younger people and African Americans and anybody, honestly, to ask for help, and we can normalize it. because people think, Oh my gosh, you're just overreacting and this and that, but mental health is just important as physical health, and we need to make that a thing, because so many people have mental illnesses but they don't know it or they're not treating it, because they don't believe in it. So with opening up this conversation and bringing it to light, I really hope that people can ask for help, and feel comfortable asking for help.

Can you speak more as to why that's particularly important for African Americans?

Yeah, it's so taboo with us! As an African American and as a teenager, I definitely see that people can say, "OMG, I'm sad," but they don't understand that maybe the sadness is something that's been going on. A lot of older generations of African Americans, even spreading up to younger generations, don't really believe in it, per se; it's more like you're just having the blues or just sad at the moment, and you'll get better. But sometimes it doesn't get better, because you have a mental illness, and because it's untreated. People think that means that you can't have a "normal" life, that you're crazy, but that's definitely not the case. And I want to make sure that people know that that's not the case.

Have you had to make time for high school in the middle of all this?

Yes, I'm a junior. Gonna be on the college search!

Are you taking the SATs this year?

Yes, I was supposed to get started, but because of the whole Golden Globes thing, I haven't even gotten a tutor. And as well as the Golden Globes, I still have two term papers and an essay due tomorrow which I have not gotten started with, but whatever. Well, I started one of them. [Laughs.]

That's rough. So your college search is underway?

Yes, I went to N.Y.U.'s open house and I absolutely loved it, so I'm hoping to go there or to U.C.L.A. or U.S.C. I definitely want to stay close to New York and California, but maybe even schools in London and stuff like that. You never know.

What are you thinking of studying?

Film and television. I really liked what the professors and people on the board had to say at N.Y.U., so hopefully I'm going to be applying to Tisch [School of the Arts] next year and hopefully I'll get in.

Would you ever get into acting as well?

I mean, if I ever got an opportunity to act, I'd take it. I've been trying to be an actress since I was eight, so it's sort of been in my blood. When I was younger, I was like, "I have to be on Disney Channel"—I wanted to make one of the "You're watching Disney Channel" things. My aspirations definitely aren't that specific now. [Laughs.]

Is there anyone you'd consider a dream person to work with?

I love Ava [DuVernay]. When she directed Selma and A Wrinkle in Time and all that, ugh I loved it. I met her one time, and she's so nice. So that's probably someone—she's a woman, an African American woman, a great person to look up to.

Would you ever act in something with your dad?

Um, I feel like I'd feel awkward. I'd definitely do it, but I'd have to warm up to him watching me act.

Who'd have thought it! Thank you @people & all the fans for naming me #SexiestManAlive. Don't forget to grab your issue this week, link in bio. I'm honoured & thankful. But what’s even more important is your vote in the midterm elections. Your vote can make a difference! ??

Is it weird to have you dad described as "the sexiest man alive"? Do you tease him about it?

Most definitely. The day after [the announcement], it was the topic at school—even the teachers were talking about it! I heard this one math teacher talking to some kids being like, "Oh yeah, Idris Elba!" and I was like, No, no, no, I don't want to talk about that—I'm good. You know, he could just be the handsomest man alive, not the—eugh, eugh, no. That's just gross. Ew. [Laughs.]

Are you into fashion at all? Have you thought about what you're going to wear to the Globes?

Yes, I am a big fashionista and a…beauty guru, if you could title yourself anything. [Laughs.] I'm definitely going to be all over the glitz and glam, and I'm definitely going to wear something that represents my style—which, typically, just day to day, is kind of tomboy, sports, but with some girly flair, if that makes any sense. Topshop and Zara are my go-to's. So whatever I wear definitely won't just be something that someone wants me to wear.

Proud of you @isanelba for being the 2019 ambassador for the @goldenglobes ..it’s amazing to see you shine in your own light. I love you much. ❤️Dad Dad.

Is there anyone hoping to meet on the big night?

Maybe some people from the cast of American Horror Story. If they're there, I'll flip out. But I'll probably flip out anyway about whoever I see who I've seen in a movie, so just about everybody.

I mean, no one can really blame you if it's Sarah Paulson.

Oh my goodness. I think I met her at the SAG Awards and I couldn't even get my words out except, "Hiii." She probably thought I was the weirdest person ever. But this time when I see her, I'm going to take control. Love her.