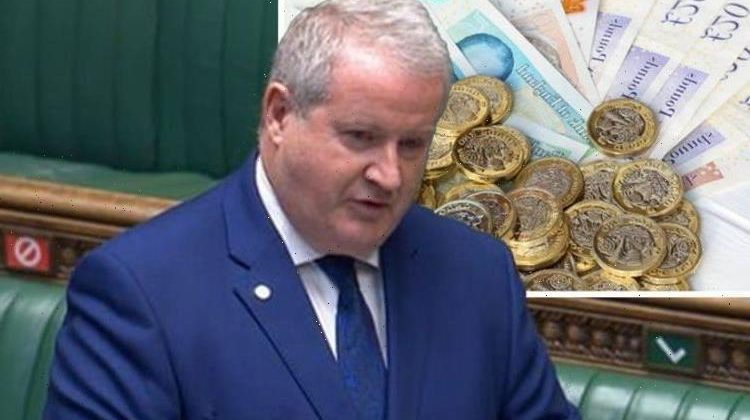 Ian Blackford clashes with host on call for Johnson to resign

In recent years Ian Blackford has become a recognisable face in the halls of Westminster as the Scottish National Party’s (SNP) leader in the House of Commons, regularly making his voice heard during parliamentary sessions. When the Tory ‘sleaze’ scandal emerged towards the end of 2021, Mr Blackford, like many other MPs, saw his second job earnings come under the spotlight, and it appears that the Scottish politician is sitting on a staggering fortune.

How much is Mr Blackford worth?

The amount has been fixed since April 1, 2020, and did not increase in 2021, owing to the economic impacts that the Covid pandemic has created.

In fact, this amount could increase in 2022 if the Independent Parliamentary Standards Authority (IPSA) – which sets the level of MPs pay – determines this to be acceptable.

MPs, including Mr Blackford, would enjoy an increase of 2.7 percent (more than £2,000) from April 1 if their pay rises this year.

While Mr Blackford’s exact net worth is unknown, several of his business ventures are on record.

Until early December 2019, he served as a non-executive chairman for an internet provider called Commsworld.

The company was taken over last year and as Mr Blackford retained a four percent shareholding in the business, he was estimated to have earned £1.8 million.

Furthermore, according to the MPs register of interests, the 60-year-old has earned £270,735 since he became the MP for Ross, Skye and Lochaber.

These figures relate to the timescale between when Mr Blackford was elected, May 7, 2015, and November 1, 2021.

Mr Blackford’s earnings can be explained by the roles he held as Chairman of Golden Charter Trust, a funeral planner, and Commsworld.

Mr Blackford held the role at Golden Charter Trust between 2015 and March 2021.

The Edinburgh native was criticised for comments he made in a 2018 Commons session where he described himself as “just a simple crofter with 10 acres”.

Anna Soubry, the then-Conservative MP, took particular aim at Mr Blackford saying that when she searched up his wealth she found that “apparently his small, simple croft is valued at somewhere in the region of half a million pounds”.

When did Ian Blackford become an MP?

Mr Blackford’s political career initially began in 1997 during that year’s UK general election, though he lost his bid to win the Ayr constituency seat for the SNP.

Indeed, he wouldn’t become an MP until his victory in 2015 where he won 48.1 percent of the vote from his current constituents.

In 2017 he was chosen to become the SNP’s leader in the House of Commons.

This move came about after his predecessor, Angus Robertson, lost his seat during the 2017 snap UK general election.