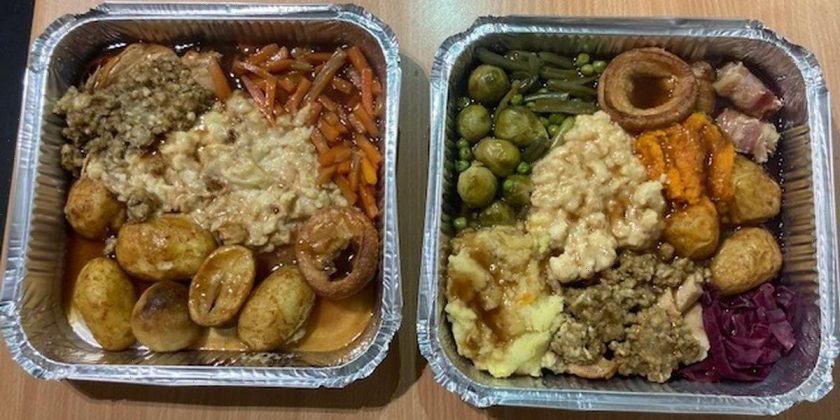 Many of us can't be bothered to do much on rainy weekends – but what do you do if you fancy a roast dinner?

You'll be pleased to know you can order the traditional British meal directly to your doorstep.

Toby Carvery is among the companies that offers Sunday lunch as a takeaway.

Or if you want to support local, you can support businesses too.

My interest was piqued when I saw that on Sundays Frenchie's lets you assemble your own roast – a game-changer.

The build-your-own option is bound to appeal to fussy eaters, who may want to forgo some of the less desirable roast accompaniments, but it also allows you to keep costs down.

There's 26 items on the Frenchie's Build-a-Roast tab, with prices for meat, vegetables and gravy each individually priced at 70p a serving.

All the bases are covered from chicken breast and numerous potato options to cauliflower cheese and Yorkshire puddings.

Additions like apple sauce, English mustard, horseradish and mint sauce are available for 35p each.

Now, if you're wanting it delivered, it's a minimum order of £12, but you can easily get two or three roasts for that as you're unlikely to want all 26 items off the menu.

If you were to order every single item it would set you back £16.45, but most likely you will pick somewhere between five and ten items.

Firstly, to see how much I could get for less than a fiver I ordered the chicken, cauliflower cheese, carrots, Yorkshire pudding, stuffing and gravy, which with a ten percent discount from the app and a 50p service charge came in at £4.91.

For those that prefer a large roast, I ordered a second to see how much you could get under a tenner.

With 12 items off the menu, it came in at 8.69 and that was probably overdoing it, especially with three types of potato – swede mash, roast potatoes and normal mash – plus pigs in blankets and numerous other vegetables and gravy.

I opted for collection as this requires no minimum spend – so you could quite easily pick up a roast for less than a fiver.

Some 20 minutes later, and back in my kitchen, I unveiled the roasts, which I'm glad to say were still very warm. All items neatly displayed in the tin, it was time to dig in.

I don' think there's any way to make cauliflower cheese look appetising in a a tin foil container, but don't let looks deceive you, as this is one of the standout parts of the roast.

The cauliflower was cooked well and the cheese wasn't too much, which is key when taking on the mammoth task of eating a large roast.

Equally notable was the stuffing, which had a pleasant texture and thankfully wasn't dry, and went down well with the swede mash, which wasn't too lumpy, and the crispy roast potatoes.

One thing that I would potentially change though, was the gravy, and while there's plenty of it, I would have preferred if it had been served in a separate container to allow me to choose how much covered the meal, rather than the individual components soaking it up.

It's not quite the level of restaurants – but as we all know, in the current climate, it's not always feasible to be spending upwards of £15 on a roast dinner.

You can also tell a lot of preparation and effort had been put into the final product, a consideration that extended to the unexpected addition of a two cake slices thrown in for free.

Though I was stuffed at this point, I made space for the delicate piece of sponge cake with raspberry filling – it would have been rude not to!