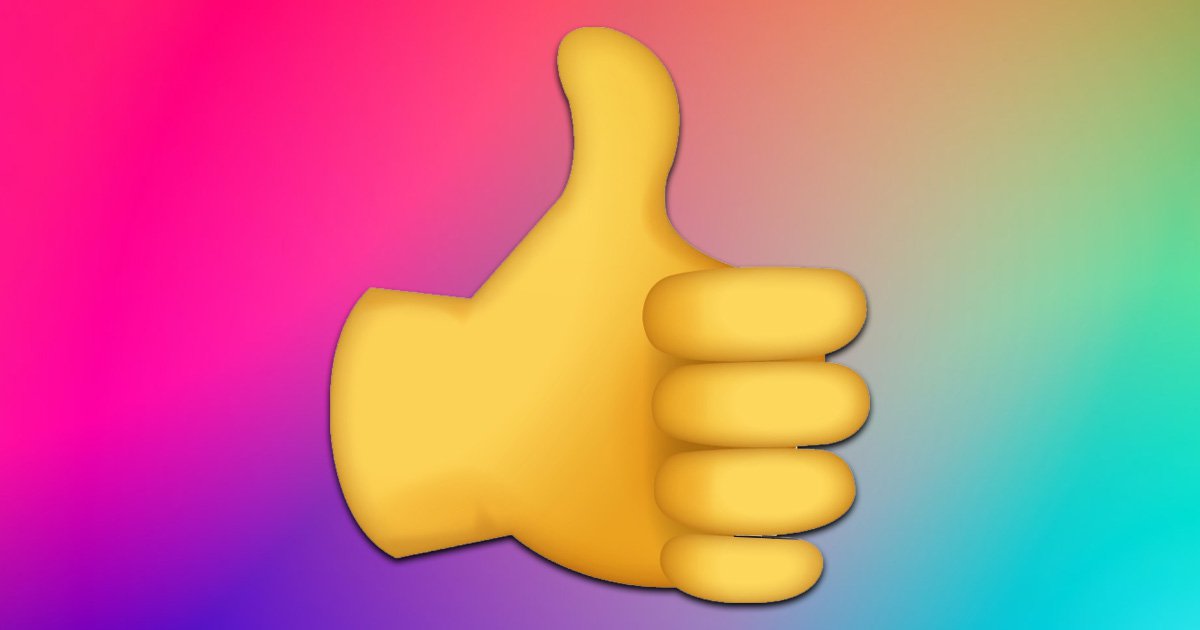 Who here thinks a ‘thumbs up’ in response to a message is fine?

Chances are, if you’re 30 plus, you’ve answered incorrectly.

I certainly did, as I found out last week when a US survey of 16–29-year-olds revealed the 10 emojis that only ‘old’ people use.

The list included not only the thumbs up, but icons like ‘red heart’, ‘clappy hands’, and ‘OK hand’.

I thought I was being quite modern with my emoji use… turns out I’m living in the dark ages.

Language is constantly evolving. New slang words appear all the time, and old words can sneakily take on a whole new meaning when a new generation gets hold of them.

This reappropriation of words doesn’t really bother me – after all, it’s been happening ever since the first cavewoman’s indiscriminate noises started to take on a new shape.

Each generation has its own sub-language, and for the most part, I’m cool with not knowing the latest street speak.

The ten emojis that only ‘old’ people use

But while we’re all accustomed to language evolving, I have to admit I didn’t think emojis would.

When they first appeared on the scene, I found them an invaluable way to add a little personality to my messages.

We’d just come from those first, stumbling text messages when we were writing to a character limit to preserve our pay-as-you-go-credit.

Back in the day before emoticons, the directness and brevity of the SMS led to much confusion.

I still remember poring over a boyfriend’s text with my sister, trying to work out whether it was nice or snarky. And the time I texted a friend a kindly ‘thanks so much for thinking of me’, only to discover she thought I was being passive-aggressive.

Texting was a dangerous game.

Then, like a knight in shining armour, a happy little yellow face came to my rescue. First, emoticons appeared as clever mixes of colons and brackets, then a range of pictorial symbols from smiling to crying, from red hearts to suggestive aubergines.

I embraced (almost) all of them, and many misunderstandings were neatly side-stepped by a well-placed tiny graphic.

Sure, perhaps it’s a little sad for a 40-something woman to rely on little yellow faces to brighten up her emails and chat messages. But I kind of like the fact I can send someone a smile to show appreciation or indicate it was great to hear from them.

But now, the survey has revealed that however well-meaning we might be when we finish an email with something like a OK hand, it might be interpreted differently by the recipient – especially if that recipient is a Gen Z.

It seems, rather than being thoroughly modern, I’m actually out-of-touch and showing my age.

Who knew that a thumbs up now indicates passive aggression rather than approval?

Like to pop a red love-heart in your texts? You’re past it, mate. Same goes for the kiss and even the humble crying face.

These days, apparently, if you want to show amusement you are meant to include a symbol of a skull (dying of laughter).

When did this happen? And how come nobody in my age-group got the memo? (For younger readers, a memo was a paper document sent internally in a company before email. Yes. Before email).

How was I (and anyone else over 30) meant to know that the meaning of the pictures we were using had changed? That we were exposing ourselves to judgement by sending a smile?

I’d never use a new word without checking the meaning, but I’d thought I was pretty safe with a check mark.

Instead, I’ve discovered I was committing graphical faux-pas. Upsetting certain recipients, or advertising the fact that I am – if there was ever any doubt – old.

So what should I do?

I’m all for evolution but adopting some of the new symbols could backfire too. I’m not keen on the idea of sending my mother a skull when wishing her happy birthday, and I’m pretty sure if I text my sister a clown she’ll be either confused or terrified.

And clearing up any misunderstanding by adding a disclaimer to a thumbs up (‘please note: this thumbs up is being used to indicate that your message has been received and actioned’) kind of defeats the point of emojis in the first place.

For someone newly sporting reading glasses and often squinting at my phone screen when I can’t find them, the thought of increasing my emoji menu is also a no-no – half the time I’m only relatively sure I’ve sent the right one as it is.

So after careful thought, I’ve decided to keep hold of my outdated emojis. If they show my age – so be it. I’m old enough to know that outdated becomes retro-cool if you’re willing to wait.