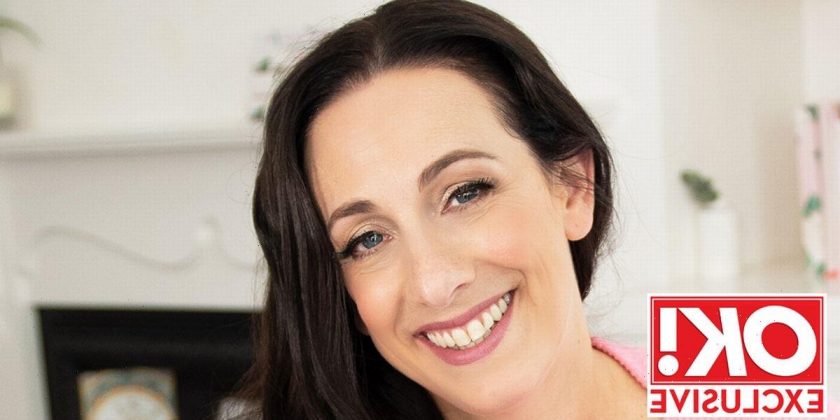 Monique Sveinsson, 48, shared her story of grief with OK! after she experienced a traumatic stillbirth and a miscarriage in the space of just 12 months. Here she tells her story of family and survival…

'The theatre was always a massive part of my life. For years I worked as a stage manager on big shows like A Chorus Line and High School Musical. I loved the glamour, the greasepaint and the backstage fun.

The hours were long and during touring everyone socialised together. That was how I met my husband Ágúst, originally from Iceland, when he was working as a drummer on High School Musical in 2009. We were both around 35 when we met and we quickly fell in love and planned a family together.

My passion for theatre life started to wane when we had our first daughter, Isabelle, in July 2011. I went back to work when she was one, but it got harder when I became pregnant again in July 2013. By then I was working on War Horse six days a week, working 80 hours, and we relied on babysitters and my parents to look after Isabelle.

My second pregnancy felt different – the baby didn’t squirm around as much. Movements were a rarity and I often went to the doctors to get her heartbeat checked. I instinctively felt something was wrong.

Then, at 30 weeks, the day before my husband’s 40th birthday, my worst fears were realised. I caught sight of myself in a mirror on stage and my belly had dropped. We were about to go to Iceland and were staying at my mum’s in Essex. That night, I said to Ágúst, “Something’s wrong.”

We kept prodding my belly, trying to make the baby move. The next morning I went to the hospital to make sure everything was OK, telling Ágúst not to come with me. But the sonographer couldn’t find a heartbeat. They phoned Ágúst to tell him. Later he told me he heard me screaming in the background. To me, it still feels so raw, like it was yesterday.

The worst part was giving birth. I was induced and the labour took 16 hours. I don’t know how I got through it. It was like an out-of-body experience, but the hospital and staff were brilliant. They have a special unit for stillborn babies and we spent precious time with her taking handprints and footprints. We chose the name Rosa after the birth because I immediately thought about planting a tree or some flowers in her memory.

Going home without her was so hard. We told Isabelle her sister wouldn’t be coming home, but she was too young to grasp what had happened. Even we struggled to believe it was real. It was a very dark time. I was depressed, grieving for my little girl.

Three months later, I went back to the show, but I’d lost my love for it and I hated leaving Isabelle. After much discussion, we started trying for another baby and I immediately got pregnant in April 2014.

But at the 12-week scan I discovered I’d miscarried a little girl at around 11 weeks. I chose to have surgery to remove the embryo and was booked in for a week later. In the meantime, my body started to reject the baby. I had terrible cramps and bleeding and at the hospital car park I collapsed. I don’t remember anything until waking up from surgery. It was very traumatic.

This time I couldn’t return to work. I lay in bed mourning the loss of both my babies.I had no direction, strength or drive. But one day, Isabelle found me in my bedroom and said, “Please play with me, Mummy.” I realised I wasn’t being a mum to her – I needed to get back on my feet.

The first step was finding a job working from home. I started selling skincare products, but then I had my lightbulb moment. I’d done so much planning in my old theatre job to get everyone to opening night, so I started to create worksheets for the others mums to help them organise themselves.

Soon that became my focus. I created my first stationery product and the Perfect Planner Company was born. The focus helped my grief, but I still wanted another baby.

Although doctors advised it would be risky, we agreed to try one last time. I got pregnant again in late 2014. They’d discovered I had umbilical cord abnormalities with the two previous pregnancies. There are three vessels that carry nutrients and oxygen to the placenta and remove waste from the baby and two of them were blocked. Rosa had been starved of the nutrients in the womb and with my miscarriage, the effect had happened even more quickly. I was very unlucky that it happened a second time, like lightning striking twice.

So this time I was scanned each week and had blood-thinner injections every day. Understandably, I was on tenterhooks, but in July 2015, I gave birth to my miracle baby, Sienna, via a C-section at 36 weeks. Now I can’t imagine life without her – she’s a ray of sunshine. I think Ágúst and I both hold her that bit closer because of what happened.

My other baby, the Perfect Planner Company, is very successful and this year we’ll be stocked in John Lewis for the first time, which is a dream for me. Recently, I decided it was important to give something back. In Baby Loss Awareness Week, we launched a package of products where a percentage of profits go to the stillbirth and neonatal death charity Sands, to fund the planting of trees in its memorial garden.

We have a tree at home which we planted when we lost Rosa. I go and sit by it when I need time out. It’s calming and comforting and it feels right that I should help bring comfort to other parents who have lost their babies too.'