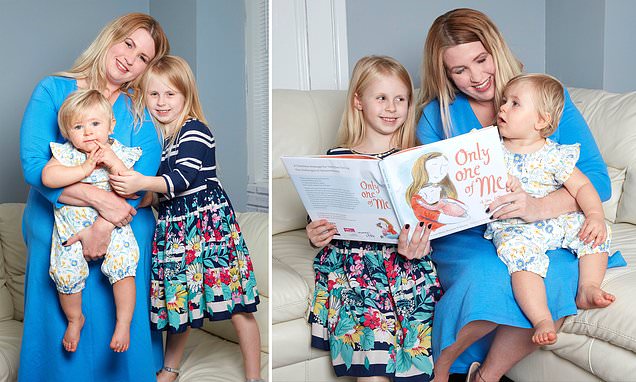 ‘I don’t want to spend the life I’ve got left being angry’: That’s the courageous message of a dying mum who has devoted herself to helping others, in a humbling example to us all

Do you know a woman who deserves recognition for her outstanding achievements? Then nominate her for our 2018 Inspirational Women Awards. Five national finalists will be chosen to attend a black tie gala dinner next March, supporting YoungMinds, the UK’s leading charity fighting to improve the mental health of children and young people. Here, ALICE SMELLIE meets one such inspiring woman, Lisa Wells, who has been nominated by interiors specialist and designer Pearl Lowe . . .

Sitting in her pretty living room, Lisa Wells, 32, tells me, ‘I’ve made journals for the girls of all the things we’ve done together, but how do I tell them about this?’

She’s talking about the challenge she now faces: explaining to her two daughters, aged six and one, that she has terminal cancer.

‘There’s lots of advice about what to say to children, but mine are so little. How can I explain how I feel when Ava is just learning to read and Saffia isn’t even talking?’ she asks. 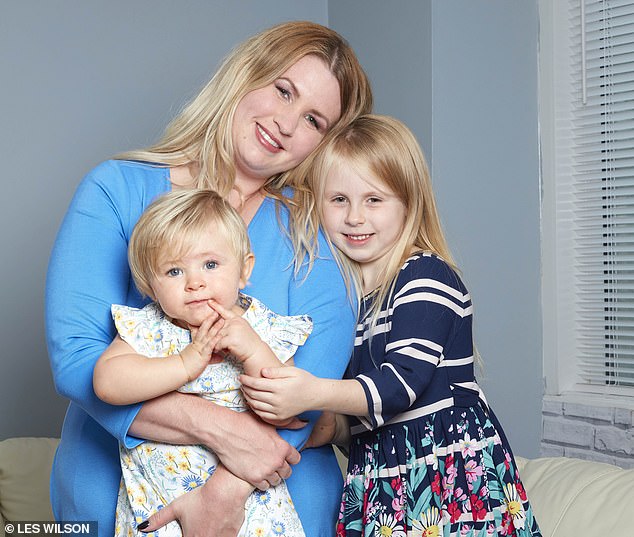 Lisa Wells, 32, (pictured with her daughters  Saffia (left) and Ava) who has terminal cancer spoke about the inspiration behind her book Only One Of Me, which was written to help families discuss terminal diagnoses

She is curled up on her sofa in fleecy pyjamas and is remarkably cheerful for someone who has spent the morning at hospital having chemotherapy. Lisa’s courage and the innovative and deeply loving way she has faced this challenge make her truly inspiring.

Faced with having to tell her then five-year-old daughter she had cancer, she teamed up with children’s author Michelle Robinson to write a picture book, Only One Of Me, that will help families discuss terminal diagnoses.

‘I think Lisa is quite extraordinary and deserves recognition for her fund-raising efforts and for writing a book that will help so many families,’ says Pearl Lowe, a former pop star who helped to organise a charity concert for Lisa earlier this year and lives in the same Somerset town as her.

Lisa herself is modest about her efforts to provide her daughters — and many other families — with answers and comfort for years to come. ‘Writing a children’s book and helping families talk to children whose parents are terminally ill felt like the most amazing opportunity.

‘I wanted the book to say all the things I want to tell my daughters over and over again as they get older, but may not be able to — that I am proud of them, that they are strong and that they should be kind, brave and free.

‘It’s a love letter to them both. I also included some simple advice — that it’s OK to cry and that they are loved by many people. I wanted it to be for all parents in the same position as me, too.’

Lisa and her husband Dan, also 32, have fought to ensure that their daughters’ lives remain as normal as possible.

Maintaining family life takes a near-superhuman effort, never mind writing a book as well. But Lisa says it has been worth the hard work and the rush to get Only One Of Me finished. ‘When I received a copy, I cried. Dan hasn’t read it and says he never will, as it’s too heartbreaking.’ 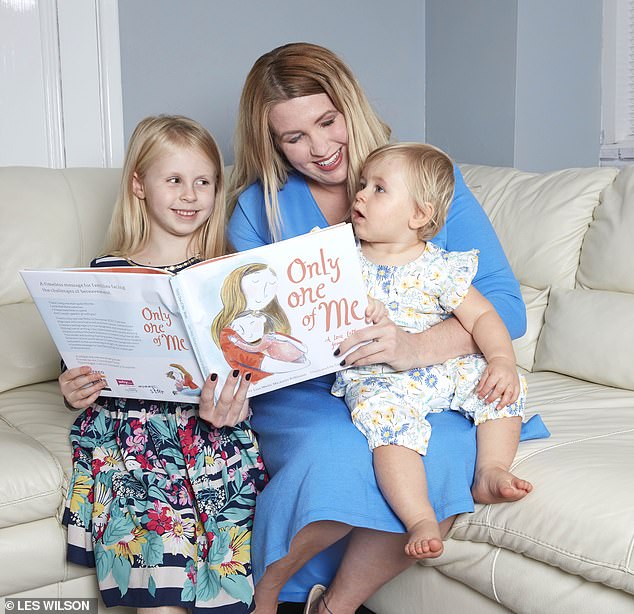 For Lisa, the first signs that she might be seriously ill came shortly after Saffia was born in October last year. She’d had a difficult pregnancy, with crippling stomach pains, bleeding, backache and frequent vomiting.

After Saffia was born, she lost 3½ st in six weeks — and the symptoms continued. Eventually, Dan called an ambulance and she was given an X-ray, which found a blockage. ‘I don’t know how to describe the feeling when you hear the word “cancer”,’ she says. ‘Nothing sinks in. Nothing but that word, cancer. The word that takes your life, your family. “What about my girls?” I asked, then burst into tears. Actually, I was a bit embarrassed about making a fuss. I didn’t for one moment imagine that I wouldn’t recover.’

A week later, the family had a meeting with an oncologist. Ava had gone to school and they had two-month-old Saffia in a portable car seat. ‘So,’ said the doctor, looking down at his notes, ‘we’re looking at palliative care.’

‘I actually didn’t understand him,’ remembers Lisa. ‘My first reaction was that I must have always misunderstood what the word “palliative” meant.

‘He told me that, with treatment, I was looking at a few months to a few years, if I was lucky.’ Lisa’s first chemotherapy was in December last year. ‘When Ava came home from school that day, we were watching Hollyoaks — a guilty pleasure — and one of the characters had cancer. Dan and I had already discussed how to explain my illness.

‘There was no question of saying that I might only have a few months. But how can you tell that to a five-year-old who has no concept of time?

‘We wanted to use the proper words, cancer and chemotherapy — if we just said I had tummy ache, then, for the rest of her childhood, she might associate tummy ache with dying. 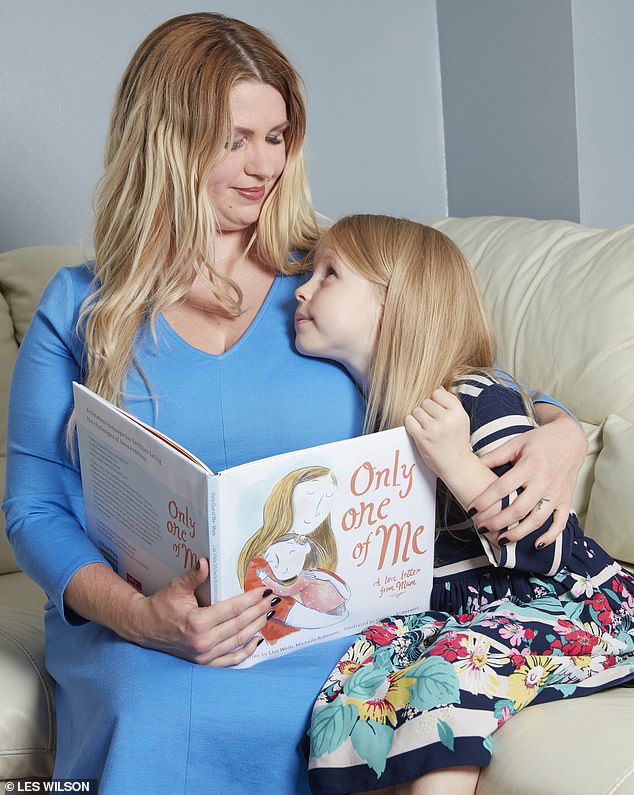 Lisa (pictured left) has raised almost £85,000 for her fundraising efforts in addition to writing her book and balancing family life

‘So I told my five-year-old I had cancer, just like the character on Hollyoaks. We discussed whether or not I’d lose my hair like the lady in the show, and whether I’d look like a boy — the worst thing you can imagine if you’re a little girl in Year One! “She still looks pretty,” said Ava about the on-screen character. I agreed. And that was the end of it.’

As well as writing her book, Lisa’s constant efforts have raised almost £85,000 via JustGiving and sponsored support from locals, friends and family, who formed a group called Lisa’s Army UK.

All author and illustrator royalties from Only One Of Me will be donated to the cancer and bereavement charities Mummy’s Star and We Hear You (WHY).

Meanwhile, Lisa is preparing to meet the next challenge, whatever it may be, with her usual grace. ‘I don’t often get angry,’ she says. ‘That’s not how I want to spend my life. Right now, I am grateful to have had a magical Christmas with my family.’

When asked whether she is inspirational, she laughs: ‘Well, I’d like to think I’ve helped people.’ 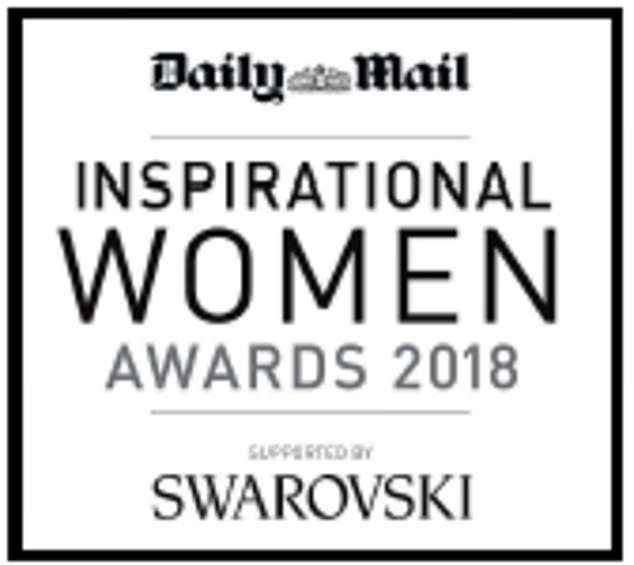 Visit dailymail.co.uk/inspirationalwomen to nominate your inspirational woman of the year