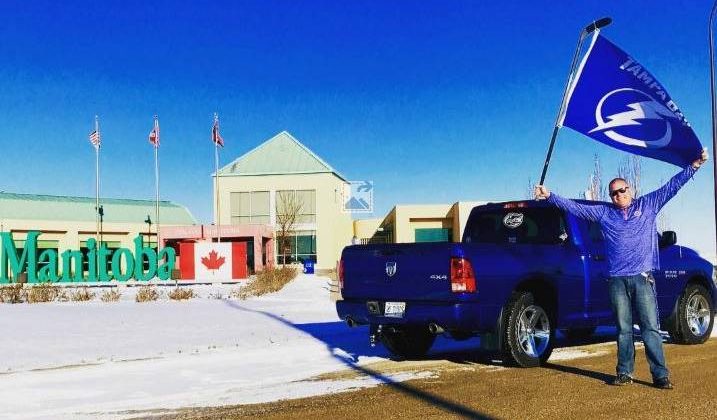 He has since headed south, but not before sharing his thoughts on how the people of our province live up to the licence plate (Friendly Manitoba).

“Meeting the people makes the journey special,” said Vosding, “everyday I’ve met so many good people here and they’ve kind of taken me under their wing.”

The Lightning season-ticket holder of ten years said even though he didn’t get the result he wanted (Tampa Bay lost 5-4 in overtime to the Winnipeg Jets), his experience at Bell MTS was the highlight of his trip.

“In Tampa there is a lot more talking and background noise when the game is going on. It’s cool how passionate people are here, and focused on the game itself.”

Your’re wrong if you thought he’s travelling alone. Tagging along is his dog and fellow Tampa Bay Lighting fanatic Holland.

The 40-year-old Vosding said he has been to 28 countries and after just one-week, Winnipeg’s culinary scene has made it’s way near the top of his list.

“I was fascinated with the prairie cuisine, Indigenous foods, honey dill sauce, a lot of the local bakeries with rye bread and Jeannie’s Cakes and a lot of hamburger joints too, so I ate a lot when I was here.”

His top two restaurants among the many he dined at were Fusion Grill and Feast Cafe and Bistro.

Adam Vosding and his dog Holland taking in the sights of the Forks.

The decision to travel around the world tasting food and experience different cultures was an easy choice, said the former commercial Real Estate agent.

Adam Vosding hanging out at the “Welcome to Nebraska” sign during his trek up to Winnipeg.

As for were he gets the passion to travel, Vosding credits his late father.

“You learn that life is short. I had a little bit of money saved up and my dad passed away a few years ago and his quote was ‘enjoy the ride’, so I’m kind of on a journey to enjoy the ride.”

Vosding, an American with dual-citizenship, was actually born in London, Ont., but this was his first time in our province.

He said the Manitoba leg of his trip was very interactive and he encourages people to reach out to him through Facebook and Instagram.

“Who knows, I might only be doing this for a few more weeks or a few more years and I love this opportunity to showcase what I’m doing to everybody.”

As for where Vosding and his dog Holland are heading, their next stop is Los Angeles.