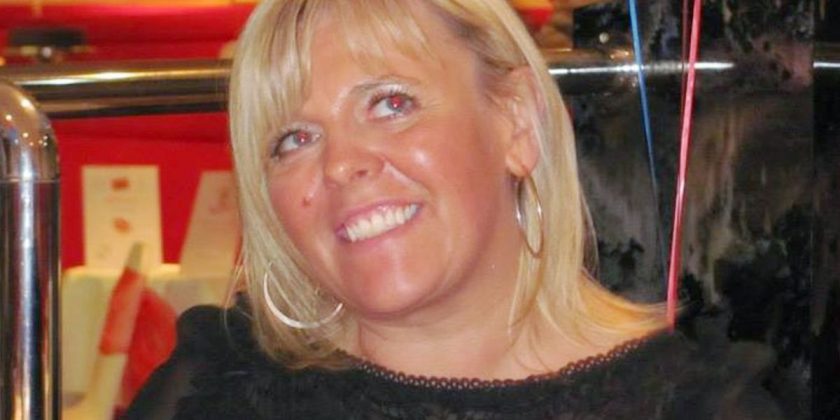 A healthy mum-of-one died from a heart attack aged just 42 while on her first holiday with her new husband.

Vickie Jeffs passed away in her sleep just hours after hearing her young son perform her favourite song on karaoke while they were on a three-week holiday to Tenerife.

More than two years later her suitcase from the holiday stands, still packed, in the hallway of the home her husband, Ronnie, now shares with her son, Lucas.

Ronnie said: “We went on holiday to the same place in Tenerife three times every year. We loved it there. Vickie used to say it was our second home.

“After Vickie died, the Spanish authorities did not send her heart back to the UK with her body and the more I thought about it, I realised it was meant to be.

And Ronnie and Lucas, who has autism, still make sure they go back to the same holiday destination.

Ronniesaid: “Lucas likes the security of going to the same place on holiday because of his autism.

“Though he has learning issues, he loves to sing karaoke.

"Incredibly, though he can’t read, he knows every word and every note.

"His mum’s favourite was Rod Stewart’s ‘Handbags and Gladrags’ and he sang it to her just hours before she died.

“We had the same song for Vickie’s funeral.

”Lucas does not talk about his mum’s death at all. But every time we go to Tenerife, he packs his favourite photo of Vickie and puts it in the kitchen of our apartment.

“And in the local karaoke bar, he sings ‘Handbags and Gladrags’ in her memory.

“In that way, he feels as though his mummy is on holiday with us.”

Ronnie, 53, and Vickie first met 25 years ago, when she was a barmaid in his local pub.

Both were in other relationships and were just friends.

But in 2010, their paths crossed again at a party – and this time, they were single. By now, Vickie had a young son, Lucas, three.

Ronnie said: “We got chatting and it was just instant. We were made for each other, even though I was 6’3” and Vickie was only 4’11’.”

“She was fun and bubbly and always giggling.

“We loved holidays. Lucas has autism and so he really loved a strict routine and we went to the same place, three times a year.

“We’d spend around six weeks a year in Tenerife, and Lucas was like a little celebrity over there.

"He was always on the Karaoke singing Elvis and Tom Jones. He was so popular and he felt very safe. We all loved it there.”

In December 2016, the couple were finally married. The following summer, they booked their usual three week holiday in Tenerife.

Ronnie says: “We were having a great holiday, Vickie was perfectly fit and healthy, we had no reason to worry. She swam every day and we had long walks.”

The night before Vickie’s death, Lucas had performed, as usual, on the karaoke, singing his mum’s all-time favourite Handbags and Gladrags.

"But at the end of the night, Vickie complained of an ache in her left side.

Ronnie, from Manchester, said: “She went to bed and we thought a good night’s sleep would fix it.”

At 1.40am, Ronnie woke to hear what he thought was the sound of Vickie snoring .

He says: “I nudged her but she didn’t move. I went into panic, her lips were blue, and she was struggling to breathe.

"I did CPR for 25 minutes on my own, until the paramedics arrived.

“They were the worst moments of my life. I knew, by the time the ambulance arrived, there was no hope.”

Vickie was pronounced dead in hospital. Six days on, her body was flown home – but her heart was missing.

Ronnie said: “At first, I couldn’t believe they hadn’t sent her heart back.

"The British authorities said they didn’t need it and the more I thought of it, I decided it was fitting to leave her heart in Tenerife – because that is where her heart is.

Ronnie chose Handbags and Gladrags to play at Vickie’s funeral.

He and Lucas returned to Tenerife to scatter Vickie’s ashes and have since returned on holiday too.

Ronnie said: “Lucas does not talk about his mum’s death at all. He does not communicate much verbally.

“But every time we go to Tenerife, he packs his favourite photo of Vickie and puts it in the kitchen of our apartment.

“And in the Karaoke bar, he sings his mum’s favourite by Rod Stewart. In that way, he feels as though his mummy is on holiday with us.”

Ronnie is now raising Lucas, in the family home.

He said: “We agreed all round that it was best to leave Lucas where he feels safe, at home with me.

"And we have helped each other through this – he has been my little saviour.”